Chicken on a Raft

James Bird; I Had a Horseshoe; The Snow is On The Ground; Lone Pilgrim; Springfield Mountain; I Got Your Ice Cold Nugrape; Bachelor's Hall; After Last Fall; One Morning In May; Which Side Are You On?; Cherry Tree Carol; Lady Gay; Searching for Lambs. 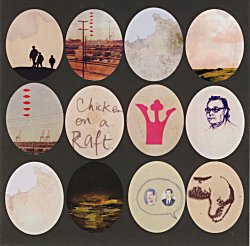 This is one of those records for which the comment 'Oh, you know all the words, and you sung all the notes, but you never quite learned the song' might have been especially coined.  For little if anything of the traditional sources of their songs, beyond the words and the tune, seem to have entered the consciousness of the two American singers featured here.

Their Press Release tells us that they are Thom Moore and Tommy Cairns; actually a pair of 'longtime veterans of the Oakland (CA) songwriter scene', who began singing unaccompanied and in harmony out of 'a love for British traditional recordings by the Young Tradition, the Watersons, and Martin Carthy'.  Unsurprisingly, given my comments above, this doesn't show, either!  They then 'moved beyond mimicking their British forebears and began exploring the American folk tradition'.  The extent of this 'exploration' is very open to question.  The blurb goes on to tell us about these ballads which 'have passed down from generation to generation, each iteration providing it's [sic] own input to the meaning of a lyric and melody'.  If only there were some evidence of 'meaning' evident here.  These songs, apparently, are 'as true and applicable today as when they were first sung by a long forgotten minstrel'.  I Got Your Ice Cold Nugrape?  Which Side Are You On? ...  Sung by a long forgotten minstrel?  I don't think so!  Honest, I'm not making this stuff up!  And nor is this CD a release on the Saydisc label!

Why am I reviewing this CD?  Well, not just because it was sent to me, but also because 'Paul, I'm one of the people behind Antenna Farm records' wrote again to ask me to.  So let's get to it.  The singing is adequate, though a few of the harmonies do raise eyebrows from time to time.  Two songs stand out: The Snow is On The Ground, better known as Time to Remember the Poor, comes from the always interesting Eleazor Tillett, and carries a gorgeous tune.  Possibly even more interesting is Fiddlin' John Carson's Bachelor's Hall - a delightfully strange song if ever there was one.  Indeed, there are many good and interesting songs here ... the problem lies with their performance.

The reason that the old traditional singers are good to listen to is that they do interesting things with the songs.  The way they sing demands your attention - even throughout a long song.  Chicken on a Raft sing like the revivalists they are - only they don't have their guitars with them today.  So all we get are the words and the tunes - plus some not terribly interesting harmonies.  All the skill and style which initially caused these lads to like these songs has been ignored ... or, maybe, not even recognised.  Indeed, in one case, not even the words have survived intact ... Texas Gladden's 'I used to drink ale' has been changed to 'wine' - which doesn't even rhyme!

Even the record insert is pretty poor.  It does, unusually, cite the sources of the songs - which is a good point but, that aside, it's a peculiar design mish-mash.  The front, back and center feature these oval panels (as you can see), but the significance of the art within them eludes me.  There are several sketch portraits, presumably some of which are of Thom and Tommy - but we are not told.  The insert back cover has a painting of a cityscape under a lowering sky - but is this connected with any of the songs?  Then the disc itself and the inner tray paper feature a completely different style painting of forest trees with houses in them - a la Tolkein ... again, why?