While Vallenato as a genre has been relatively well served by commercial companies, the Colombian variant has (in the West at least) been rather overshadowed by its central Caribbean counterpart, making this a very welcome release indeed.

The notes reveal that these field recordings were made for a documentary shown on French television.  There has been no opportunity to view that film here in the UK, but a dozen years earlier a segment of 'Beats of the Heart' featured something along similar lines.  In that piece we learned of heavy involvement in the accordion competitions by the local mafia and drug dealers.  That may still be the case; the notes do not tell us.  Anyway, that should not distract us from the music, but may account in part for the vocal content of certain tracks.  Lyrics of three numbers only are transcribed, and all consist of agression-tinged macho self-praise.  El Tigre de La Montana and La Carta Escrita laud the playing skills of the respective accordionists, and mention rival players in a vaguely disparaging manner, much as calypsonians in Trinidad have done down through the decades.  El Gallo Viejo is similarly filled with braggadocio, but appears more to refer to sexual, rather than musical exploits.

Ages of performers range from seven score plus to perhaps early middle age.  The backing musicians, though, are not named, as if they somehow deserve less (or rather no) credit within this competitive accordion super-star system.  And while a first hearing may suggest a certain degree of sameness in performance styles, a careful analysis actually reveals considerable divergences.

Stylistically most conspicuous, perhaps, is Ivan Zuleta, among the youngest of these performers, who on Improvisation attacks the melody like the demented Norteno player Steve Jordan, on an instrument which appears to harbour reeds which are tuned differently to the remainder heard here.  In Matilde Lina Nicolas Mendoza makes only occasional use of bass chords, but his treble style is more akin (remaining in TexMex Country) to that of the flashy Tony de la Rosa than, say, Flaco Jimenez.  On his La Creciente del Cesar it sounds as if two accordions are in play at some points.  More than any other player featured here his style contains a lot more shading, such as the quiet passage in the latter number.  Lorenzo Morales Herrera uses his accordion more like a percussion instrument on Serenita, heavily stressing the off-beat; while Alberto Murgas favours runs in the upper register, with pronounced octaving, in La Negra.  Antonio Salas' improvisations have a more fragmented feel, with the accordion merely filling in between the extemporised verses, which clearly please the onlookers.

Notes relating to the style of Francisco Rada Bautista claim that he possesses "a clear Black Influence", and although they are not specific on this point, he certainly uses a different style to the remainder of the featured players.  An analogy from Louisiana might be between that of white Cajun proper and Zydeco. 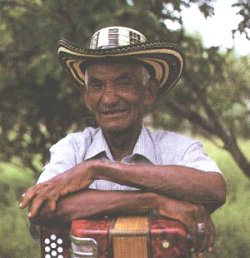 His treble line follows closely that of the vocal melody, and in general is a little more basic than some of the other players represented here, with pronounced bass chords, played in particularly staccato fashion, and with a 'blue note' feel, during La Despedida.

Four tracks are unaccompanied, although three remain firmly within the competitive Vallenato context.  Cantos de Vaqueria though, as the title suggests, is an old cowherd work song - and, indeed, cattle may be heard lowing in the background - but it seems rather out of place here, though.

The booklet notes leave much to be desired.  Details about the performers are variable: ages are given for some, and birth places of others, but there is no overall consistency.  One singer, Ismael Herrera, is omitted altogether.  I would have liked also to have known the name of the half smiling, half grimacing nonagenarian who stares out at us from behind his three row Hohner on the front cover.  On the plus side, frequent Ocora contributor Marie Desbureaux, who here provides an English version of Lizette Lemoine's French original, is a gifted translator whose prose is far less tortuous than that found on many foreign releases.

There is much here, both for those who enjoy exciting music well played, and for anyone curious to hear how other cultures bend the ubiquitous button accordion to their will.