This extremely fine-looking and weighty tome is a 'revised and updated edition of ... The Oxford Book of Sea Songs, first published in 1986, and unavailable for many years'. 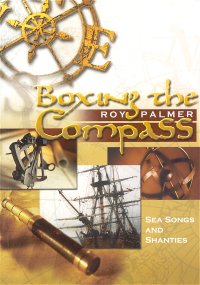 It is the first venture from Herron Publishing, a new imprint dedicated to reprinting 'classic texts on folk song and traditional music'.  David Eckersley, the man behind Herron, states that he was prompted to start this work because of the lack of resources for floor singers due to the number of important books which had gone out of print.  His is clearly a laudable aim, and doubly so if he is able to present a new edition which is an improvement on the old.  Certainly, in terms of presentation, layout and production quality, Herron have done a superb job on this one.

Roy Palmer's 22-page Introduction makes a fascinating read and manages to pack in a great deal of information whilst remaining vital and entertaining.  His detailed notes to the songs are generally only a little less so - though not all good songs have a interesting story behind them, and lots of dates, shanty collections and broadside printers can begin to pall after a while.

For my own taste, there are rather too many songs rescued from manuscript collections and similar dusty archives, compared with ones cited as being 'sung by' a named singer.  As far as I can count them, only 56 out of 163 fall into this latter category.  I fully realise that many readers will not find this a problem - indeed, I don't mind it too much myself, having just begun to sing Bold General Wolfe again, after having had the song resurrected for me by a single verse (from a broadside in a Roy Palmer book!) which throws an entirely different light on its central theme.  Nonetheless, I do prefer songs which sound as if they came from the mouths of ordinary people, not too unlike me, rather than those with lines like 'Come loyal Britons all, rejoice with joyous acclamations' or 'O noble England, fall down upon thy knee, and praise thy God with thankful heart which still maintaineth thee'.

Not being the owner of the Oxford version, I'm unable to comment upon the degree to which the Heron edition is 'revised and updated' - Roy Palmer simply states 'I have been able to make a number of corrections, additions and improvements to my original commentaries and notes'.  He has also added four relatively contemporary songs from the seventies and eighties, bringing the present total to 163.

I was very pleased to see numbers from Steve Roud's Folksong Index being newly employed in this edition.  For someone like me, the Index is extremely useful - not as an alternative to Child, Laws, Greig-Duncan, etc, because it doesn't do the same job - but because it allows me to see the overall range of a song's dissemination, or who else knew it in a particular area ... or even whether I have the words in a book or record somewhere.  This is often a problem if the editor has used a title I've never heard of for a song.  A further advantage is that when a 'new' song turns up in someone's repertoire, Steve can allocate it a Roud number - usually by return e-mail - and Index users then have the data available to them in the next update.

So I was sorry to find that not all of the songs have Roud numbers.  Quite why this should be I can't fathom - some have already had them allocated; the first song in the book, for example, John Dory (Child 284), is also Roud 249, but this is not cited.  Similarly The Sailor's Lamentation (Laws K3) does not have its allocated Roud 524 shown.  Nor have the publisher (or Palmer?), it would appear, asked Steve Roud to allocate numbers for songs which are, as yet, not included in the Index - some 5% of the total.  This seems a most unfortunate lapse on someone's part, and rather undermines the rationale for citing the Roud numbers in the first place.

The above point about unfamiliar song titles arises with the present volume.  Roy Palmer has arranged the songs so that the events described in them fall in approximately chronological order, and this seems a perfectly sensible decision to me.  Furthermore, where possible, he has chosen a contemporaneous version of the song, and again this seems sensible.  However, it obviously behoves him to use the title as printed or collected for that particular version ... and not a more well-known title with which his reader may be familiar!

As a result, finding a song you're looking for among the 163 titles and (I presume) an approximately equal number of first lines can be more difficult that might be imagined.  If Palmer's chronologically correct title and/or first line are not the ones you know, you're in for a long hunt!  In looking through the songs I noticed one called The Loss of the Amphitrite, and immediately wondered if The Gallant Frigate Amphitrite was also included.  That title doesn't appear in the index (the song's called Rounding the Horn here), and despite it being correct for the first line, this isn't found under G or F or A - but under T for The Gallant ...  I can't argue against the logic of this - but it certainly wasn't where I looked first, or second!  In much the same way, a mention of the 1797 Nore Mutiny made me wonder if The Death of Parker was included.  Nope!  But President Parker is.

A few minor criticisms: There are quite a number of spelling irregularities - most, I judge, caused by the OCR scanning of the original.  Thus e and c are sometimes wrongly identified; likewise i and l.  Few are of any great importance, and at least one - Chappeli & Ebsworth - is quite amusing, but I would have hoped that, in a conventionally printed book where a mistake is there for the duration, some rather more careful proof reading would have been employed.  If I - somewhat dyslexic - have noticed a number of errors, they may easily be a good many more lurking.  At least one - 'thc' - should have been picked up by a simple spellchecker.

There are also some minor grammatical or punctuation errors - though some would argue that such errors are never minor!  The misuse of the apostrophe, as in '... in the 1560's ...' always annoys me, particularly when it's correctly printed elsewhere in the book.  Then there's the vexed matter of single and double quotes.  My understanding is that, these days, double quotes (speech marks) are used only to denote actually spoken words (reported speech).  In general, Roy Palmer (or Herron Publishing) adhere to this formula ... except in the song texts, where reported speech - Saying, "I'll sigh till I die if I ne'er see you more." - appears in single quotes for some reason.  Unfortunately, this is not a consistent usage - sometimes reported speech is not quoted at all.

The strange usage, to me at least, of the single closing square bracket ] employed by OUP to separate a term from its explanation in the Notes, has been retained in this edition.   I found 'eke] also' not to be immediately illuminating - but you get used to it ... except where it's been omitted, or where [ or } is printed instead!  Further, this usage is confined to the Songs section alone - notes in the other parts of the book are shown in what I had always assumed was the normal format, with a colon separator.

But enough of small complaints - this is a beautifully presented book containing a great many superb songs, often in very full versions.  No one who enjoys singing good songs will be disappointed by it - and those for whom the sea has a particular fascination will, I'm sure, find it a joy indeed.