A Treasury of Library of Congress Field Recordings

The Archive of Folk Song of the Library of Congress is 70 years old in 1998 and, as John Cowley notes in the preface to Blues & Gospel Records 1890-1943, 'almost from its inception [it] became a focus for US folk-song research.'  This is readily confirmed by a cursory glance at the pages of B&GR, which list many, many recordings that would evidently make fascinating listening.  For example; on the day in 1939 that Christine and Katherine Shipp sang Sea Lion Woman for Herbert Halpert in Byhalia, Mississippi, one Isaac Shipp also described a trip he made to Africa, and sang two songs, respectively learned in Sierra Leone and the Belgian Congo.  Thanks to research by compiler Stephen Wade for the splendid booklet accompanying the CD, we know that the Shipp sisters were the only girls among 14 children of 'a sharecropping-minister father and a choir-director mother.'  The parents' names were Walter and Mary Shipp, so whether Isaac was a brother, an uncle, or even a grandfather of the two girls - let alone how he came to visit Africa - remains unclear.

This is but one tantalising example of the wealth of material recorded for the Library of Congress.  The CD under review contains tracks performed by African Americans, Acadians, Native Americans, and British Americans (meaning descendants of migrants from the British Isles).  The range of styles, topics and purposes of the music heard is very wide, but it's worth stressing that even this wide-ranging survey covers but a fraction of the AFS's holdings.  In the summer of 1997, I was spooling through a tape looking for material by Sonny Terry, and as I stopped the machine from time to time to check on progress, I kept hearing wonderful central European women singers. 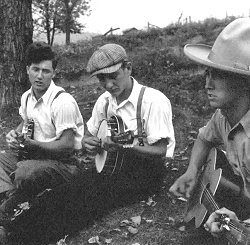 Blues fans associate Detroit in 1938 with Alan Lomax's recordings of Calvin Frazier and his family, but they were the only English language musicians recorded during Lomax's 10 days in the city; so far as I know, the performances by Serbian diple and duduk players that were a notable feature of that particular expedition remain unissued.  Two years earlier, Lomax had recorded three songs by his fellow field worker, African-American Zora Neale Hurston - in Pétionville, Haiti, where they were conducting research.

It will be obvious why a recurrent wish of folk music researchers and enthusiasts is that more of the AFS's holdings were available for study without the necessity of a trip to Washington, DC.  Even when they were available, LofC albums were expensive; I recall paying Ł4.50 in the days when the average LP sold for less than Ł2.00.  With the deletion of those issues, and the virtual demise of the vinyl LP format, one inevitable result is that previously issued, but no longer available, recordings get bootlegged on CD.  I say nothing about the morality of this; as a consumer of such releases, I am in no position to do so.  I note only that, in the absence of legitimate issues of the material, it will happen.  Of course it is preferable that the material should be legally reissued (in terms of the rights of the artists and/or their next of kin as well as of the AFS); and of course it is preferable that the reissuing be done in the best possible sound, and with the fullest possible annotation.  Flyright's LofC series in the '70s was, and Rounder's series currently is, operated with those parameters in mind.  However, the market for this material is a limited one, and issuing it is not a way to get rich; quite often, I suspect, it's only possible by cross-subsidy from more profitable releases.  A comprehensive reissue programme is thus likely to remain a dream.

In the absence of that, and getting, finally, to business, the record at hand is certainly a shining example of the next best thing.  Its 30 tracks were recorded between 1934 and 1946, and all are said to have been previously issued on long playing albums (although as it happens, a previously unissued version of Sonny Terry's harmonica tour de force Lost John has been used by mistake, greatly adding to the listening pleasure of this particular reviewer, who is at other times a discographer, and at all times a fan, of Sonny Terry); but they have been carefully remastered from the original discs, and in some cases are slightly longer than the versions previously issued, through the retention of interview material.  In addition, as noted above, Stephen Wade has researched the artists, using, among other sources, prison records, Library of Congress 'corporate subject files', and interviews - mostly with relatives, for sadly, if not surprisingly, only Honeyboy Edwards still survives.

His performance, incidentally, is the only twelve bar blues on the disc, but it would take an exceptionally sour blues fan to regret that, given such gems as Soldier's Joy by the Nashville Washboard band, on which Scots-Irish fiddle music collides head-on with black jazz, to the benefit of both (sound clip). 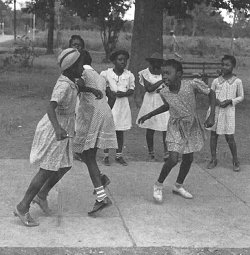 Wade's research reminds us that the sounds we hear on records were made by real people, leading real and complicated lives: Ora Dell Graham was an elementary school child when she recorded vigorous versions of Pullin' The Skiff and Shortenin' Bread in 1940.  Before her twenty first birthday, she was shot while carrying out a hold-up.

Were it not for the galloping consumption of megabytes entailed, I would put 10 seconds from each track on this website, and defy anyone, having heard them, not to buy the disc.  As that is not a feasible strategy, I will let examples in each genre stand for the others.  To begin with, here is West Texan Jess Morris,

on the finest of the CD's many fine tracks, performing Goodbye Old Paint, which he learned in 1884 from a former slave who acquired it on a trail drive (sound clip).  The fiddle is tuned DADD, as in Billy Stepp's celebrated Bonaparte's Retreat, also included, from which Aaron Copeland took a theme for his ballet Rodeo.  Goodbye Old Paint is wrenching, impassioned, quintessentially western American music, and yet it flaunts its British origins, both in the contours of its tune and in the lines 'In the middle of the ocean may grow a green tree/But I'll never prove false to the girl that loves me', which appear as if from nowhere in Morris's paean to his pony.

One of a number of unaccompanied songs, John J Quinn's The Avondale Mine Disaster was collected by George Korson during 30 years of research into mining song and instrumental music, was recorded in 1946.  The 108 miners he sings about died in 1869, and their deaths resulted in legislation about ventilation and egress; but mining remained hard and dangerous work, and the history the song deals in was as real to Quinn as last week's news.  Texas Gladden, magnificent singer though she was, fails to make me like One Morning In May; everyone has certain tunes they dislike irrationally, and The Unfortunate Rake/Streets Of Laredo is one of mine!  Choices, choices ... it's hard to leave out the three young Hoffpauir sisters harmonising Sept Ans Sur Mer, surely the most beautiful song ever to mention eating rats, but I take the view that, if I know it already, most readers of this review will know it too. 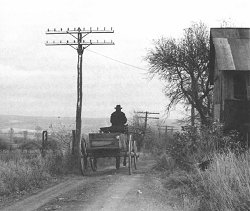 Instead, here's a less sublime, but most unexpected informant, the celebrated jurist Judge Learned Hand,

singing a Civil War song, The Iron Merrimac, and dilating upon his sources in an accent not commonly heard on folk music recordings (sound clip).  In utter contrast - and, as it happens, next on the CD - is the Creek Lullaby,

sung by a singer known only as 'Margaret' in what Wade well describes as a 'weightless voice [that] shimmers in the room' (sound clip).

Among the religious music, there's shape-note singing led by Paine Denson in Birmingham, Alabama; the blind Turner Junior Johnson accompanying himself on bluesy harmonica; and the celebrated Ain't No Grave Can Hold My Body Down by Bozie Sturdivant, a 34 year old Mississippian, and a disciple of the Texan R H Harris, who was then in the process of reinventing gospel quartet lead singing from - literally - top to bottom.  All three were recorded by Alan Lomax in the summer of 1942, as indeed were the Nashville Washboard Band and Honeyboy Edwards, a fact which, like the CD as a whole,

speaks volumes about both the diversity and the quality of American vernacular music in those days.  To illustrate that quality, here are the extraordinary Wash Dennis and Charlie Sims, two convicts recorded at Parchman by John A Lomax in 1936, performing Lead Me To The Rock in quartet style [sic] (sound clip).

Given that Stephen Wade's task was further to winnow a body of work that had already been selected for on LP, it's no surprise that his final choice is almost a surfeit of masterpieces.

Since Wade is a banjo player, it's also unsurprising that there are a number of magnificent examples of performance on that instrument included.  It seems appropriate to finish with Thaddeus Willingham's driving Roll On The Ground (sound clip).

With one exception, all the performances on this CD, even the most technically accomplished display pieces, come from the hearts of the artists, and sound out the heartbeat of America.  The one exception is Woody Guthrie.  I'm still not convinced that he is as great as his reputation; as on The Gypsy Davy, he seems anxious to present himself through the song, rather than the other way about.  That track aside, I wouldn't change a thing, and if this review has read at times like advertising, I'm sorry, but I don't see a way of avoiding it.