The Hind Wheels of Bad Luck 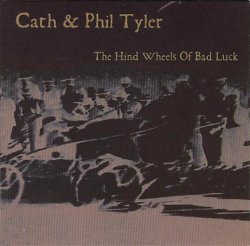 I've never been entirely sure that 'cross-cultural' musical endeavours ever really deliver something better than the two (or more) individual cultures being crossed have done.  And when the two cultures concerned are so very similar, I feel the problem - ironically - becomes more pronounced.  I sing a couple of American songs myself, as do a number of my friends whose singing I admire ... we do so because we love the songs concerned, and this comes across in our performances.  But I'm sure that, listened to objectively, the original American performances are the more satisfying - more comfortable in their own cultural environment.  And 'folk art' is, after all, art as process, not as object.  I suspect that this is why I enjoy this new CD from Cath and Phil Tyler just a little bit less than their splendid 2008 debut offering, Dumb Supper; that was all American music, this is part English.

Another difference is that Phil Tyler's instrumental contributions feature rather more strongly than they did on Dumb Supper; this, in itself, is not a problem, as he's a very fine musician with a definitive style which is quite his own.  A perceptive reviewer in UNCUT, wrote that 'every guitar stroke ... sounds as if it will be the last one, even when it's the opening note of a song.'  This is at its most marked in the first track, Dearest Dear.  However, there are times when, in slower songs like Our Captain Cried, the measured guitar accompaniment means that there are gaps of up to 4 seconds between each line, and more between each verse - which breaks the flow of the narative, and the meaning of the song.

Again, as on Dumb Supper, the Tylers have written new tunes to a number of the songs.  In that earlier instance I felt that 'when, as here, nothing sounds out of place, I, for one, couldn't give a damn.'  Two and a half years later, their new tunes on this CD don't convince me quite as much.  Please don't misunderstand - I like this record very much indeed ... just not quite as much as their previous offering.

However, it does score higher in one respect; it contains the wonderful Castle by the Sea, Lena Bourne Fish's version of The Outlandish Knight, set to that glorious tune.  I've heard it several times recently, both recorded and live, and it really is a stunner.  Somehow the rather jaunty melody set against a decidedly dark text works unexpectedly well ... imagine filming a ghost story in bright light and vivid colour - the contrast making it all the more strange!  It only fails to win my 'best Outlandish Knight in the world' award due to the fact that it stops before the parrot comes on the scene.  I mean, what's a real, serious ballad without a talking bird or a bottomless boat?

Despite the record label's name, these are very HI-FI recordings, so I've made the sound clips as MP3 files, so you can enjoy the quality of the sound.