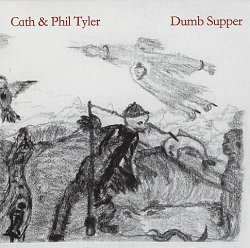 This must count as the most interesting and exciting revialist recording of traditional songs I've heard in a very long time.  And while it's only the second week in February, I'll be very surprised (and happy) to hear a better one this year.

Cath Oss, from New Jersey, deserves be well-known to most of my readers for her great singing with Cordelia's Dad, courtesy of a couple of very nice CDs of their traditional output and several UK tours a few years back.  I bumped into her in England some eighteen months ago, and learned that she is now living here, in Newcastle, and is married to an Englishman, Phil Tyler.  This CD is the result of their combined endeavours.

Tony Engle is fond of saying that American folk songs are always going to be more popular and accessible than British ones because they almost always have a rhythm section.  While I think that this is a little simplistic, I will admit that many American singers certainly have figured out how to sing these old songs with an accompaniment far better than we have in Britain.  This current CD (which has only one unaccompanied song), demonstrates that we can learn to do it too - the singing manages to sound free and unfettered by any rhythmic straightjacket.  Cath Tyler has a realy great voice for traditional song, and Phil on guitar, fiddle and jew's harp - while never being 'back' in the mix - both compements and enhances to the final performance, rather than distracting or detracting ... as is so often the case.  I really do like this CD very much indeed.

All but two of the 13 tracks are traditional, or nearly so - and one of the self-composed numbers is a really great banjo tune called Yellowhammer (sound clip), which could so easily be thought traditional, if you hadn't been told.  Cath and Phil admit that they have 'changed some of the words and wrote some of the tunes', which is exactly what traditional performers did - and when, as here, nothing sounds out of place, I, for one, couldn't give a damn.

All the songs are American, of course, so the titles may not be familiar to a UK audience, but many are versions of songs we know here: Wether's Skin, from Lena Bourne Fish, is the Wee Cooper of Fife, or The Dew Flies Over the Green Valley (Child 277); Queen Sally, from Archie Stugill, is a hybrid of Death of Queen Jane and Sally and her True Love Billy; Devil Song, from Hattie Hicks Presnell, is The Devil and the Farmer's Wife (Child 278); Farewell my Friends, adapted from The Sacred Harp, is Going Over Jordan; Dewdrop is Farewell He.

So what do they sound like?  I'd like to give you a clip from each song, but a couple will have to suffice - here's a bit of track 1, Wether's Skin (sound clip left), followed by what seems to be a compendium of floating verses to a lovely tune, titled 1000 Years (sound clip right).

This CD is only released this week (and doesn't yet appear on the NO-FI website at: www.no-fi.org.uk) but it's well worth seeking out.