Before I get into reviewing this release, I would like to get something off my chest that I have been carrying around for a long while.  As a flute player for over 30 years, I believe the flute has become a much-abused instrument, especially in Irish traditional music circles.  My early enthusiasm was fired by the wonderful playing and generosity of my mentors, Paddy Taylor and Roger Sherlock in London, and regular time spent with the mighty Paddy Carty, when on annual holiday in Loughrea.  This, I am aware, was a priceless introduction to all things Irish.

These days most flute players are judged by the volume and harshness of their bottom D.  "He had great wind" is thought of as a compliment.  Not a mention about the music being played!  Also, most people who think like that would not wait till the flute player and the flute had warmed up.

The flute in the closest instrument to the human physche.  There is a wonderful thing happens when you start to play and after a while the flute warms up and you get used to breathing irregularly and the pair of you get in sync; that is a magical time.  Also, you can't play well with your stomach full of food.  Or near people smoking.

To watch any of the three mentors mentioned earlier, they just tilted their head back and the music poured out of them.  Neither did they wave their instrument around in the air, huffing and puffing down the hole; no, it was a gentle process.

All of the above was to advance my theory that your personal flute style develops as a life-long process and it will be very interesting where the players of today take their undoubted talents - sadly few of them talk or mix with the older generation of musicians, to their own detriment. 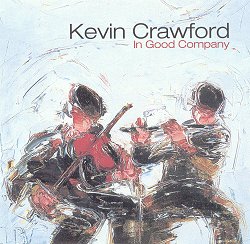 Too many are happy to imitate the latest CD by whomsoever.

With that off my chest, let's turn to Kevin's latest record.  One of my favourite people in traditional music and a friend of many years standing.

The premise on which this recording is based is one I heartily endorse.  The flute and fiddle are the finest of comrades and make beautiful music together.  Both very closely imitate the sounds of every day life, especially country life.  Kevin has attracted a host of highly sought-after fiddlers playing today in Ireland.  The music reflects Kevin's very infectious personality; always cheerful and forward-looking.

Track 1.  TommyPeoples / The Long Drop.  Reels.
Kevin is joined by Mayo fiddler and fellow member of Lunasa on a set of three reels.  The first, Kevin got from his long time playing partner, Tommy Peoples, a recent composition from Seattle based fiddler, Richard Twomey, and closes with an old familiar he got from Patsy Moloney, a great flute player he knew from his Birmingham days.

Track 2.  Young Ennis / The Mouse in the Mug.  Jigs
One of the little known treasures of Clare fiddling for many years has been James Cullinane and here we get a rare chance to hear James recorded, I am one of the many who wonder why James Cullinane has not been recorded before.  They play two lovely jigs.

Track 3.  Tae the Beggin / Alice s Reel.
Kevin plays his Eb flute and is joined by Frankie Gavin on two reels, the last one composed by Frankie.  Kevin has persuaded Frankie to tone down his variations and we get two good tunes played excellently, and in doing so we are treated to share how beautiful the tunes and the playing is.  More please!

Track4.  Coalsfield House.  Slow Air.
Still in Eb, Kevin shows us how well he can play slow airs, this time Neil Gow's beautiful air Coalsfield House.  Many may not appreciate the orchestration by Carl Hession.  I personally do; but that may be tempered by the high esteem in which I hold Carl and his music.

Track 5.  The Bag of Spuds / Matt Peoples.  Reels.
Here Kevin shows off his recent arrival a flute in Bb made by Australian maker, Mike Grinter.  He is joined by Clare Fiddler, Martin Hayes on Viola for a pair of reels which are great flute playing favourites.  I am not too sure this track comes off; I am left wondering if they would have sounded better played on instruments pitched in concert.

Track 7.  Jimmy O'Reilly's / Doonagore / The Bellharbour Reels.
The first cut featuring the duet of Kevin and Tommy Peoples.  Tommy took the newly landed Kevin under his wing when the young 'brummie' arrived in Ennis and fuelled the fire and love Kevin had for the music.  The music they made together became the talk of Clare.  In his very interesting sleeve notes, Kevin pays tribute to Tommy's generosity of spirit, a view I would like to heartily endorse here.  Doonagore is a reel I associate with the late Clare musician, Micho Russell and is often called, Micho Russell's Reel.

Track 8.  Sliabh Geal gGua.  Slow Air.
Another slow air; here the beautiful song/air from the Deise area of Waterford, Sliabh Gal gGua, which as youngsters we had beaten into us in Gaelic at school.  Not being one to bear a grudge, this is one of my favourite airs in the Irish canon.  Here Kevin has invited his fellow member of Moving Cloud, Manus Maguire, to include his version of this fine slow air on his CD.

Track 9.  The First Pint / The Flying Wheelchair / The Humours of Derrycrossane.  Jigs.
Reprise of the duet with Sean Smyth on three reels including the composition by Charlie Lennon to that much-missed musician, Donncha Ó Briain.

Track 10.  John Carty's / The Stolen Reel / Feeding the Birds.  Reels.
Kevin in Eb and fiddler, Mick Conneely, play three lovely reels which recall those wonderful sessions in London's Good Mixer.  And they serve to remind us of how the Irish music has always thrived in exile.

Track 11.  The Rolling Wave / Finbar Dwyer's Favourite.  Jigs.
Highlighting another little-known fiddler outside of the music family, from Woodford, Co Galway, and long time musical partner of the late Paddy Carty.  Conor is highly regarded for his unusual versions of tunes and much sought after by his fellow musicians in Ireland.  Two beautiful jigs, the second of which I know, as Statia Donnelly's, a big favourite with Waterford musicians.

Track 12.  The Banks of the Suir / Mamma's Pet.  Air/Reel.
Another great slow air which for me recalls young London fiddler, Paul Boyle (sadly no longer with us R.I.P.) who used to play this beautiful Munster air.  Again the orchestra is much in evidence and I think it adds to the beauty of the piece.  It is coupled with the reel Mama's Pet, which I have a problem with - the second part, which differs from the version I learnt from Roger Sherlock, which was the same as recorded by Michael Coleman.  I am also aware that Michael McGoldrick recorded this reel with the same second part, suggesting that Kevin might have inherited this version from McGoldrick.

Track 13.  The High Part of the Road / The Hard Road to Travel / Paddy Fahy's.
Three reels played with Manus Maguire doing fiddle duties.  With lots of accompaniment, Artie McGlynn on guitar, Mick Conneely on bouzouki and Carl Hession on keyboards.

Track 14.  Brian O'Lynn / Cailleach a Shusa.  Jigs.
Two fine jigs with the same instrumentation as track 5; Kevin on Eb and Martin Hayes on viola.  I have the same comments as on track 5.  I am sure the second jig is also titled Snug in the Blanket and is much favoured by the piping fraternity.

Track 15.  Tommy's Mazurkas.
Kevin again is joined by Tommy Peoples and Artie McGlynn for three mazurkas.  All in great form.

Track16.  Farewell to Jim / That's More of it.  Jigs.
Two compositions by Carl Hession who plays with Kevin in that fine trad band, Moving Cloud.  Low Whistle and Eb flute joined on fiddle by Frankie Gavin.  The chamber later joins in, but I don't know why; however the final result is very pleasing.

Track 17.  Ashmolean House / The Kilcloon / Out on the Road.  Reels.
The return of the duet with James Cullinan for three fine and rare reels.  Same comments as their previous track.  The accompaniment does not enter until midway through the second reel, which gives us a chance to hear what a great duet James and Kevin make.  A fine closer.

The overall vibe is a lovely record of fiddle and flute music.  Many differing players, but all combining their talents to come up with a record that will be a source of joy for many years.  An album where the music is the winner and the musicians have all contributed.  I can imagine the main cause is Kevin's infectious personality and honesty for the music.

Long may he continue to thrive - and although he has to ply his trade in areas removed from traditional music, I remain confident that Irish traditional music is his first love and he will go on to inspire young musicians for coming generations as did those who went before him.

Here there's no need for didjeridoos or synths or pulses.  Just good honest traditional music played with joy and a sense of integrity.  It does exactly what it says on the cover.  A resounding success.