Song of the Crooked Dance

Most westerners probably know Bulgarian folk music either through La Mystère des Voix Bulgares, or through the jazz-fusion work of kaval (end-blown flute) player Thesodosii Spassov.  In fact, neither of these are truly representative of the Bulgarian folk tradition - which has its own strengths, as Song of the Crooked Dance makes plain.

One of the great values that Lauren Brody, the producer of this disc, detects in these early records is their spontaneity - a spontanteity that was in large part destroyed by the Communist 'folk-machine' and its often rather academic and judgemental approach to the tradition. 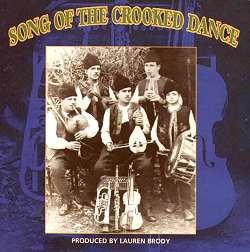 On tracks such as the stunningly staccato gaida (bagpipe) solo Tsonkinata by Ahmed Saliev, with its obsessive repetitive patterns (sound clip), or Cherven fesets, a Macedonian dance played by clarinettist Ramadan Lolov and accordionist Atanas Atanasov, the virtuosity of the treatment does not hide, but accentuates, the intensely spirited nature of the music.  The generally asymmetrical metres of the music, with time signatures in 9/8, 7/8, and even 11/16, also give it a certain rhythmical 'lift'.

One of the best features of this disc - which distinguishes it from most modern 'Bulgarian folk' collections - is the prominence of solo instrumental tracks.  As well as Boris Karlov (no, not that one) on accordion, and two gaida pieces, there is a kaval solo by Tsvyatko Blagoev in the staccato Shope style - now hardly heard, since the Thracian style with its more legato approach came into fashion in the 1950s - and a superb trumpet rendition of the dance tune Gankino by Karlo Aliev, plus an anonymous zurla (shawm) solo.  (The latter is not as well recorded as most of the other tracks, but one can understand a certain disinclination to get any closer to this strident and noisy instrument!)

As the inclusion of a trumpet piece shows, musicians were pragmatic about exactly what they played on - gaida and kaval, as well as the gadulka (fiddle) and tambura (lute), are traditional, but clarinet, classical brass and accordion also make appearances, with the same musician often playing both traditional and modern instruments, and bands often mixing them.  A pity though that we don't hear Aliev on his 'first' instrument, the gaida, though the picture on the cover does show him with it.

Vocal music is also well represented.  Brody notes that women were not often recorded in the earlier period,

since 'open' performance was not considered appropriate.  Even so, she has been able to find some excellent tracks, including Mita Stoicheva's ballad Trima bratya dyulgeri (sound clip) which tells how a builder sacrifices his wife to ensure the bridge he builds will endure.  (The theme turns up in English folk song too, though usually somewhat muted - the devil asking for a sacrifice, and being outwitted.)   The vocal music is often densely ornamented;

Stoicheva includes long melismas which sound almost Arabic.  More popular songs are also included, such as the catchy Ala imash ochi (sound clip) with its quite inimitable lyrics (comparing a girl's lips to a sugar box might be fairly conventional, but eyes like Turkish coffee cups and eyebrows like ocean leeches sound as if Peyu Nikolov had been reading too many surrealist poems).

The most unusual piece is Parush Parushev's ballad of the earthquake in Plovdiv in 1928, in which he accompanies himself on harmonium.  With the harmonium chords and regular scansion, it sounds a little like a Victorian hymn; in fact, the harmonium was the typical instrument of Bulgarian street singers, and the lyric is his own redaction of the news of the day.  The translation is slightly reminiscent of William McGonagall, but the music, with Parushev's high and rather reedy voice, is quite affecting.

Throughout the disc it is obvious that Bulgarian music is linked not so much to other Slavic musics as to the east - there is a particularly middle eastern sound to Georgi Sugarev with its oud accompaniment.  (Quite ironic really - the hero of the ballad was one of the leaders of the Macedonian rebellion against the Ottoman empire.)  And there is no racial purity in the list of performers, which includes Roma clarinet player Ramadan Lolov, and Ahmed Saliev.

Some small quibbles about the notes, which have the occasional typo.  The descriptions of instrumentalists and singers don't quite tally with the tracks; for instance, Stanil Payakov is described in the text but doesn't appear on the disc as a soloist (though presumably he is playing with Bistrishkata Chetvorka on track 14).  And since both gaidas and kavals come in several types, with different playing styles, it would be nice to have a little more detail on exactly what is being played.  The lack of data on the original recordings (the date of recording is given on only one track) is particularly annoying, in otherwise well researched notes.

However, Brody has certainly done the legwork on the history of the music and, most importantly in this period, its marketplace.  The development of the 'house bands' during the period swung Bulgarian music away from its rural roots and into an urban environment, with the classical instruments (particularly clarinet) becoming more prominent.  The gaida, on the other hand, was included in these bands at the start, but gradually fell out of prominence as more complex harmonies made the drone an irrelevance.  This is certainly not folk music as Cecil Sharp recorded it; these are commercial recordings, for the most part, and mainly (though not exclusively) of musicians who were making their living catering for modern, urban tastes.  The importance of this document is not that this is the 'original' Bulgarian folk music, but that this is Bulgarian music making the transition between 'folk' and 'popular' - and to my mind at least, doing so much more successfully than most western folk musics were to do in the first half of this century.