When learning material from another performer it's often difficult to avoid sounding like your source.  If it's a tune, the problem is not so acute - the control you have over the way your instrument sounds is limited, so the option of making a straight copy of the other person's playing is rarely a possibility, particularly is s/he's playing a different instrument to you.  The actual melody and stylistic elements will transfer - a good thing, generally - but little else.  With songs, it's a different matter and often you can hear the entire cultural baggage has been transferred intact - accent, tone of voice, vocal mannerisms, everything ........

Yet this seems rarely to happen within the tradition.  In the areas I know anything about, we don't find Cyril Poacher, Bob Hart, Percy Webb, Jumbo Brightwell, Wicketts Richardson, etc, sounding the same as each other ... or even sounding like Bob Scarce, from whom nearly all of them learned songs.  Similarly, Pop Maynard, Jim Wilson, Brick Harber, George Spicer, Scan Tester, George Townshend are all recognisably individual.  They may have a common local repertoire and style, but they sound like themselves.

On the face of it this is surprising, given that many of these singers would have had comparatively few models to work from - would indeed have spent their formative years listening to the same few singers and the same few songs, week after week in the same few pubs.  Even local anomalies don't always transfer - many north Sussex singers have the aspirated leading vowels (George Townshend's famous Hechoing Horn) typical of the area, but by no means all of them do it.

In the face of this evidence it's rather odd to find that southern English Gypsies and Travellers all sound pretty much the same - I've heard singers from Lincolnshire to Cornwall who would be very difficult to tell apart, or to place geographically.  Does the fact that they (used to) travel widely mean that they unconsciously felt the need to develop a cohesive generic style in order to promote group identity?  An authoritative answer is never likely to be forthcoming, but it is an interesting anomaly - that a discrete group like the singers in a country village tend not to have too many similarities, while a far-flung network like the Travellers seem to subscribe to a quite narrow set of performance criteria - a group style.  Would it be going too far to suggest that this is a little like the development and universal acceptance of another cultural oddity - and one (at last!) germane to this discussion - the 'folk club' style?  Because the CD under discussion is very definitely a 'folk club' record.

But before you go making assumptions about my reactions to it, it's worth having a brief look at what this 'folk club' style we're talking about actually is.  For a start, it's probably well over 50 years old - older, in fact, than the tradition in which a good number of the 'traditional' singers you will have heard grew up in.  It developed in the 1950s and had become fully established in time for the 'boom' of the '60s when a dozen new clubs sprang up every week across the country.  Its central influences must have been Ewan MacColl, Bert Lloyd, Alex Campbell, Ian Campbell, et al - and their influences must have been Skiffle, US folksongs, Scottish and Irish singers, the EFDSS ... plus the few English traditional singers who had come to light at that time.

Whatever its genesis, it was pretty universally accepted by the time most of the readers of this magazine first got to hear 'folksongs' - and has continued to develop and change in a natural and organic way right up to the present day. 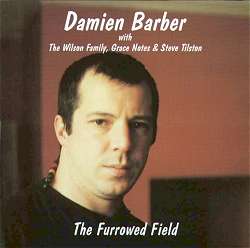 What has enhanced this rapid development and acceptance is, of course, the extent to which 'copying' is embraced within the folk club/festival scene.  Which brings me to Damien Barber's CD.

Many who know me will be aware that advancing years and too much sitting in front of loud drummers has left me a bit Mutt'n'Jeff - and I'd put the record on and was washing up the breakfast things, when track 3 prompted me to ask my wife "Am I imagining it, or is he singing with an Australian accent?"  "You're imagining it." she replied - but the feeling persisted.  "He sounds a bit like Martin Wyndham-Read" I ventured.  When we got to track 5, my son asked "Is this a Chris Wood song?"  "It sounds more like a Carthy one" I replied - although I'm not aware of ever having heard either of these songs before.  Having dried my hands, I had a look at the liner notes.  Sure enough, Damien learned Bold Reynolds from Martin Wyndham-Read, and Bill Norrie from a Martin Carthy album.  The pedigree is also plain for Hares on the Mountain (Chris Wood), The Golden Glove (Nic Jones) and Kilroy Was Here (Ewan MacColl).  There may be others, the sources of which I am unaware.

This should all be seen as an observation, not a criticism - Damien is by no means a slavish copyist - and, moreover, this is a part of the tradition in which he grew up (in which almost all of us grew up).  Why should this be?  Is it a function of so many of us having been bequeathed accentless speech patterns by our aspirationalist parents?  It may be a factor in some cases, but many folk club singers have perfectly respectable regional accents (Damien is custodian of a lovely Norfolk one).  I think it's more likely due to the natural and universal urge to try to 'belong' within a peer-group, resulting in copyist activities involving clothes, lifestyle, speech patterns, language ... which are apparent world-wide and throughout recorded time.  Maybe, if you grow up in a secluded country village where your family has lived for generations, you 'belong' already and have no need for stratagems to ensure acceptance.  Indeed, perhaps the impulse is to show your individuality by not singing The Faithful Sailor Boy just like the bloke you learned it from?

I warned earlier about making assumptions regarding my reaction to this CD - in fact, I rather like it.  Damien is a good singer, and one not afraid to show he means it when a song moves him.  The record is valuable in that few male singers record this sort of traditional material these days, and in that it may inspire a few others to try this sort of treatment or this kind of song.  The selection is varied and interesting and all the traditional songs are good ones.  I have my reservations about a couple of the five recent compositions, but I think that's more a matter of taste than of quality.

All the 12 songs are accompanied - not normally my cup of tea, and nothing to do with the tradition from which they sprang - but Damien manages to minimise the often straight-jacketing effect which accompaniment tend to bring to modern performances.  It may be due to his use of a concertina rather than a stringed instrument on most tracks - push-pull instruments tend to 'breathe' with you -

but he manages to sing quite freely over the pulse of the accompaniment.  I wish other singers could manage to do this more often.  Even the few guitar tracks don't intrude on the songs too much - here's a bit of The Gypsy Poacher (sound clip).

A number of the songs also feature vocal additions on the chorus or refrain (in this instance by the Wilson Family or Grace Notes).

Reference to recordings of those early folk clubs, Blaxhall Ship, Butley Oyster, etc, shows that chorus singing was entirely traditional - though seldom in the full harmony style found here.  Nonetheless, it's rarely intrusive (sound clip - On Board a Ninety-Eight)

Despite what I said earlier, it would not be at all fair to imply that Damien doesn't have his own style,

or needs to sing in the way his source did.  His approach to Eddie Butcher's Down the Moor is very different from the Derry master (sound clip) - probably more different than is any other song on the CD.  Does the fact that this is the only one for which a traditional source is quoted have anything to do with it, I wonder?

Returning to where I started - the odd thing is that by far the majority of folk club singers seem to copy each other, rather than the traditional singers from whom their songs originated.  It would be outrageous of me to question whether they have ever actually listened to the traditional sources, wouldn't it?  Since the singing of so many fine traditional singers has been widely and conveniently available on LP and CD for the past 30 years, it seems scarcely conceivable that one might intentionally learn, say, Creeping Jane from Martin Carthy rather than Joseph Taylor - or am I living in a different world?