The English and Scottish Popular Ballads

After such a long wait, this has proved a truly disappointing publication.  To recap; it was on the 6th November, 2002, that I announced in MT's News page that 'News has just reached us of a digital edition in CD-ROM format of F J Child's The English and Scottish Popular Ballads from the US publisher, Heritage Muse.'  Then nothing happened! 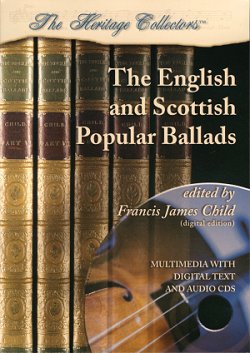 Almost two years later, after interminable false promises and hold-ups, I finally got the British Edition in my hands.  Within a couple of days of having installed it, my machine died in a very spectacular way - and by the time I'd reformatted the disc, reinstalled all my software, and caught up with the backlog of work, I'd rather forgotten about Child for a while.  When I remembered, and had reinstalled it, I found it wouldn't run - it kept trying to get Acrobat Reader to update itself - all the Digital Child files are in PDF format.

Having just got a new PC, and updated to Acrobat Reader v.7, I tried to install it again.  It wouldn't install because the Order ID 'has already been used'.  An e-mail to Heritage Muse got the ID re-set and I tried again.  All went well until the final screen - and then a pop-up box appeared containing the message 'Waiting for a external program to terminate ... Please wait'.  Nothing happened for several minutes.  The Task Manager showed an additional program called 'FileOpen', which was listed as 'Not responding'.  So I shut it down.  'Congratulations - installation complete', said a message.  But when I attempt to run it, the screen merely flashes and nothing else happens.  Acrobat still works perfectly with other PDFs, but will not run any of those in the Heritage Muse directory.  Just to be on the safe side, I asked a computer technician of my acquaintance to try installing it on his machine - he can't get it to run either.  I've checked out 'FileOpen' and find it to be a security and anti-copying plug-in for Acrobat.  Presumably it's faulty or corrupted and is preventing Digital Child from running.  Further e-mails to Heritage Muse have produced no response.  So - nought out of ten for the CD-ROM; what does the audio CD have to offer?

Well, there are 16 tracks - but not 16 ballads.  The tunes used for the ballads were of little interest to Child, as I think is well-known, so it comes as something of a shock to find that track 12, Tam Lin, is not that ballad at all, but an instrumental piece played on mandolin, guitar and bass.  It was even more of a shock to find that the tune Child prints (in the newly updated Loomis House edition that is, but it's not indicated whether this is a Child or Bronson tune), which is captioned 'supplied by Robert Burns' and never commented upon further in the text, seems to differ wildly from that played on the CD.  An even grater shock awaits the reader of the booklet notes, wherein it is divulged that this tune was written by Davey Arthur - yes, that one!  I have to say that the inclusion of this track in a publication of this sort simply beggars belief.

After that enormity, I suppose we shouldn't be surprised to find that the 'Silkie' on track 5 is the Joan Baez version, nor that the booklet doesn't tell us that this a composed '60s tune, either.  Further, that track 4 is just Joanie's 40-second 'introduction' to the song, in which she imparts the story of the song - perhaps assuming (correctly) that we will have lost interest in it well before she reaches its end some 4˝ minutes later.  So - not 16, but only 14 ballads.  These are:

Now, if you're anything like me you'll be asking yourself several questions at this point: Where are the traditional singers?  Do ballads work when accompanied?  Can a duo or a group communicate a ballad successfully?

Regarding the first one, the booklet states 'Intentionally, there are no folkloric field recordings in this collection' without any justification being given for this curious 'intention'.  Unsurprisingly, I suppose, the other two questions are never addressed at all.

Most readers will have guessed that I didn't find a great deal to enjoy on this CD.  Tom Spiers, a singer and fiddler I like, finds himself put in a rhythmic straightjacket by being paired with Larkin Bryant's dulcimer.  My favourite track is Heather Heywood's Annie of Roch Royal; as far as I'm aware I have only heard her once before, but was very impressed when I did (at The National last year).  She seems to have given some thought to what she's singing about, and keeps these thoughts in the front of her mind whilst singing the ballad concerned - a very rare thing in my experience.  She also uses both rhythmic and melodic variation, and so keeps your attention throughout a long piece - she's telling the story, and you are listening to it!  The booklet says that she 'is not a professional singer and has been modest about making public festival and concert appearances.'  Yes - and it shows!  If only there were more of the same frame of mind!

Strangely, the other two singers I like here are newcomers; Julia Friend is '20-something' and still a college student, and has learned the Brown Girl wholly from the revival, yet her simple, almost artless singing is a refreshing change from the other 'folky' performances.  Jen Larson is described as '30-something ... a young city-bred songstress trained in American jazz and 20th century pop idioms ... the urban sounds of bluegrass'.  Maybe, but she makes a fine job of Fair Margaret and Sweet William, rather in the Tim Eriksen manner.  I would have been happier to have had a whole lot more of these women, and a great deal less of the 'folk' faves.  It's a sad old world ...