CD of field recordings from Madison County, NC, plus DVD of the film The End of an Old Song.

In the early 1960s two long-play record albums influenced me and changed the direction of my life.  The first was Topic Record's LP of the Willett Family (12T84 The Roving Journeyman), a collection of songs sung unaccompanied by three Gypsies from the Home Counties.  It was one of the strangest things that I had ever heard and I wondered why any record company should wish to issue such an album.  Gradually, as I listened over and over to the singers I slowly came to realise that this was an important album.  The songs were here, preserved for ever, because they were part of a vanishing culture.  It must have taken a lot of guts for Topic to have issued that recording.  The other album was another collection of mostly unaccompanied singing - this time from singers in Madison County, NC, in the depths of the Appalachian Mountains.  This album was titled Old Love Songs and Ballads from the Big Laurel and was on the Folkways label (Folkways FW2309).  I had just been given a copy of Cecil Sharp's Appalachian song book and I was aware that the singers on this album were descended from the singers that Sharp had met there in 1916.  Again, it was a stunning realisation that this song tradition was still a living tradition.  I knew that one day I too would visit North Carolina, though it was to be some time before I was able to do so.

The singers on Old Love Songs and Ballads from the Big Laurel had been recorded by a New York musician, photographer and film-maker called John Cohen who, I soon discovered, had also recorded similar albums in other parts of the Mountains.  John was the first to record the Kentucky banjo-player and singer Roscoe Holcomb and, in Madison County, he was to discover yet another singing great - Dillard Chandler. 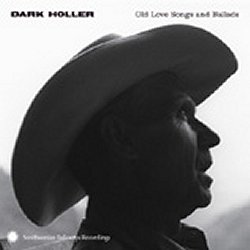 Dillard was one of the singers heard on Old Love Songs and Ballads from the Big Laurel, along with his neighbours Cass Wallin, Lee Wallin, Lisha Shelton and Berzilla Wallin.  Later, there would be another Folkways LP, this time devoted just to Dillard - The End of an Old Song (Folkways FW2418).  And, there was also a film, also titled The End of an Old Song, which John had made about Dillard.

1) together with a song from George Landers - Scotland Man, a version of the ballad Young Hunting that can also be heard on Rounder CD 0028 High Atmosphere.  There is also a previously unheard song from Dillard Chandler - Short Time Here, Long Time Gone - and three songs from Dellie Norton, sister to Berzilla Wallin.  It states in the notes to Dark Holler that Dellie can be heard on the album Old Love Songs and Ballads from the Big Laurel but this is incorrect.  She can, however, be heard singing on High Atmosphere, where she sings, among other songs, her version of Young Emily that now also appears on Dark Holler.  Dark Holler also comes with a DVD of John Cohen's film The End of an Old Song together with a 34 page booklet of notes and photographs.  In all, it's an amazing package for just $15!

In a sense both the CD and DVD are showcases for Dillard Chandler, who comes over as the central character in both mediums.  All of the other singers and musicians heard on the CD and seen on the DVD are neighbours and relatives.  So why did John Cohen choose Dillard to be so central to his work?  Well, for a start, he was a great singer - one of those people who sang in the old-fashioned manner that Cecil Sharp described when he first visited Madison County all those years ago.  Secondly, I would suggest that Dillard's character suited John Cohen's style of film-making.  Dillard lived alone, in an old-fashioned log-cabin.  There is a sense of emptiness, both inside the cabin and in Dillard himself.  Of the few pieces of furniture seen within the cabin, most are tattered and broken.  It is almost as though Dillard was a displaced person, neither fully at home in the mountains, nor in the town of Asheville where he often sought work.  In one part of the film we just catch a glance of Dillard standing on the edge of a dance floor, surrounded by dancing couples.  All about there is music and laughter and yet Dillard seems to be drifting away into some world of his own.  According to John Cohen, '(Dillard) was a man confronting the challenges of modern life, but even though his experiences placed him in continual engagement with present-day America, he knew an ancient world within his head.'

And this reminds me about one ballad singer that I first met in Madison County in 1979.  The singer was initially surprised that I could drive a car.  It seemed that he thought that Englishmen would ride about on horses and would live only in castles.  That's what they did in the ballads and folktales that he had heard all his life and, so far as he was concerned, that was how things must be today.

Elsewhere, John Cohen writes, 'One reason I made the film … was to respond to folklorist Richard Chase's assertion (at the University of Chicago Folk Festival in 1961) about traditional Appalachian singers who sang English ballads: he characterized Appalachian ballad singers as the upright descendents of Anglo-Saxon yeomen farmers transplanted to the Appalachian Mountains, with their culture intact, continuing their pure - white or Anglo - traditions.  Dillard Chandler offered an alternative to such stereotyped purity.' And this, of course, is a central, indeed vital, point about the Anglo-American song tradition.  Cecil Sharp saw the singers in terms of a transplanted Elizabethan peasantry.  But this was never the case.  Recently, for example, I came across an Estonian tune, Kaera-Jaan, that is almost note for note the same as the American Old-Timey tune Flop-Eared Mule.  It turns out that the tonic part of the tune is well-known throughout Eastern Europe, and it just goes to show that the ancestors of the present-day Mountaineers came from all over the place and not just from 'Olde England'.

John Cohen mentions some of the factors that he found in Dillard's singing, including, 'the assuredness of his expression with its odd musicality', 'the heroic-tragic qualities in the singing', and, interestingly, 'the strong undercurrent of sex in his subject-matter'.  It seems that, unlike some Appalachian singers, Dillard liked to sing Little Mattie Groves because of its sexual content - a factor that deterred some of the more puritan singers from including the ballad in their own repertoires.  At one point in the film Dillard talks openly about his own sexual needs.  John Cohen again, 'I anguished as to whether it was appropriate to include that statement in the film.  Was it too revealing?  I decided to include it because it brought home the idea that the ballad singers were complex people with individual qualities, and their songs contained reflections of the singer's lives; the singers weren't just carriers of distant, detached stories.  I screened the film for (Dillard's) community a few years later, and Dillard didn't show up.  I was apprehensive about how the audience - who all knew Dillard - would respond to his personal narrative.  As his voice was heard on screen talking about his love life, a man in the audience said loudly, “Tell it like it is, Dillard”; another chimed in, “That's right, Dillard.”  After that, the entire audience sang along with the ballad performances on the screen.  It was the only time anything like that could happen, or ever did.'

In places The End of an Old Song reminds me of another Appalachian film - Bluegrass Roots - which follows Bascom Lamar Lunsford as he seeks out Appalachian singers and musicians.

2  The banjo-player and fiddler Obray Ramsey appears in both films.  There are ballad-singers aplenty.  Both films feature extended dance sequences.  And, both films were shot in black and white.  But there is a difference.  Lunsford was conscious that his film was a medium for himself.  You can see him trying to get into each performer's act.  At times he almost grabs other performer's instruments, so that he could show them (and the film's audience) how he could play.  On the other hand, John Cohen's film of Dillard Chandler takes an opposite approach, one in which Dillard is shown at his most vulnerable.  At home he stares moodily into space.  He sits silently on neighbour's verandas and, in Asheville, he all too self-consciously flirts with a couple of local ladies.

The End of an Old Song is an important document, as is the accompanying CD of songs and hymns, many of which are, originally, from the Old-World.  The song notes are, for the most part, accurate and of value, although there is no way that In Zepo Town - a version of the song that is better known in Britain as In Bruton Town - can be a version of the ballad The Dowie Dens o Yarrow (Child 214).  Nor is the broadside ballad Johnny Doyle really related to the ballad Lord Saltoun and Auchanachie (Child 239).  But these are small quibbles.  If you love Appalachian music, then this is the CD and DVD for you.  You might find them challenging.  But then, just about anything that is worthwhile is also challenging.