Georgie; Fish In The Mill Pond; Childrens Songs:Julie Jenkins/Hushabye/Baa Nanny Black Sheep/Sheepy and the Goat; I Heard My Mother Weeping; Reuben's Train; Biscuits; Tucker's Barn; Give the Fiddler a Dram; And Am I Born to Die? Marthy, Won't You Have Some Good Old Cider? A-Roving On A Winter's Night; Arnold's Tune; Pretty Saro; Early, Early In The Spring; Little Maggie; Bill Banks; Rambling Hobo; One Morning in May; The Faithful Soldier; Omie Wise; Jimmy Sutton. 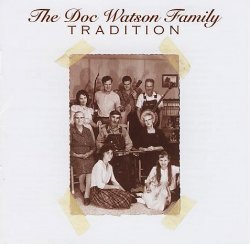 This is actually a CD re-release of Topic's 1977 LP, 12TS336, with no additional tracks.  Whilst Doc can be found on 10 of the 24 tracks, it's usually in the role of back-up guitarist and he only sings on 5 of these - and never solo.  Because, as the booklet notes point out, this is a record of the musical family of which Doc is only one part - albeit the most well known.  So we also hear from: Gaither Carlton - fiddle, banjo, vocal (his father-in-law); Dolly Greer and Tina Greer - vocals (cousins); Annie Watson - vocal (mother); Arnold Watson - banjo, vocal (brother); Merle Watson - guitar (son); and Rosa Lee Watson - vocal (his wife).  At 47 minutes duration it might be considered somewhat on the short side, but there's so much to enjoy here that no one ought to feel short-changed by the time the record finishes.

The booklet notes, mainly by Bert Lloyd but with notes on the recordings by Ralph Rinzler, are fairly brief by today's standards, but manage to give a convincing picture of a blind boy's growing up in a family like this, and his emergence as a professional musician as a young man.  There are a number of heartening anecdotes, plus an only slightly camouflaged concern that (even though he was only in his mid 40s at the time and had been a professional musician for years) he was quite as happy playing rock'n'roll and Bluegrass as he was with the timeless classics of the local repertoire.

The music and singing - it almost goes without saying - is just wonderful.  Gaither Carlton gets the lion's share, contributing to 12 of the tracks, but the other family members all aquit themselves admirably - no one seeming to have been included for the sake of 'completeness' rather than quality.

Readers who don't own the original LP should really think seriously about buying this CD - it's one of the necessities of a good collection.