Field Recordings made by Alan Lomax in Ireland 1951 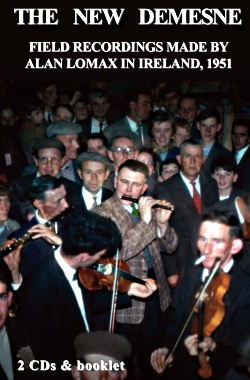 Pretty much what it says on the tin, this collection presents 145 minutes of music and song collected by Alan Lomax on the first of three visits to Ireland.  This music was collected in January and February 1951 in Cork, Galway and Donegal.  34 edited tracks were presented on an LP in the Columbia World Library of Folk and Primitive music series in 1955 and reissued by Rounder Records in 1998 on CD offering additional notes but nothing like a complete version of any of the songs which the longer format might have allowed.  The reissues were reviewed on this site at the time.

This new edition makes a clean start with copies of the original reel to reel recordings which are held at the Irish Traditional Music Archive (ITMA).  Although there are a few songs or tunes that Lomax asked to be played in truncated fashion, the whole of each performance is included on the CD.  Harry Bradshaw has remastered the recordings and done a wonderful job of presenting 70 year old recordings of singers and musicians that sound as if they were recorded yesterday.  Nicolas Carolan, the retired Director of ITMA, has produced a fascinating commentary of Lomax's travels through Ireland and extensive sleeve notes on the sources and background to the songs as well as brief summaries of the meaning of the songs in Irish.

Alan Lomax had started his life as a collector working with his father in America, and following the invention of the reel to reel tape recorder he had persuaded Columbia Records in 1949 to sponsor an ambitious project to collect and present the "folk and primitive music" of the world in a 30 odd LP series, each one set in a different country.  Having decided to start in France, Lomax met a young American singer of Irish heritage in Paris, Robin Roberts, who persuaded him that Ireland would offer better opportunities.  Lomax agreed and also agreed to take Roberts with him, a practice he continued apparently, as we have Shirley Collins' experiences travelling with Lomax in the recently reissued book America over the water.  After consulting the archives at the BBC and the Irish Folklore Commission, Lomax arranged to liaise with noted collector, singer and piper Seamus Ennis to follow up and re-record some of his contacts.

Ennis was a speaker of Irish and had mastered the dialects of Cork, Conemara and Donegal, seen these days as the main Irish speaking Gealtacht areas.  His ability to interact with local musicians and singers had been a great asset in Ennis's own collecting.  His diaries from his days working for the Folklore Commission from 1942 to 1946 have been published in Irish as Mise an Fear Cheoil (trans: I am the music man) and in English as Going to the Well for Water. They show that Ennis stayed in an area for about three weeks at a time, meeting various singers and players in a locality, and notating their music in a beautiful manuscript hand and copying down and double checking the words of songs.  Other Commission collectors had used disc recording devices such as that used to record Johnny Doran in 1948, but these recorders needed a van and electricity to transport and power them.  Ennis had a bicycle.

The CD collection kicks off as Lomax did with some selections of songs and tunes from Seamus Ennis recorded at his home.  The tunes include the New Demesne which gives the collection its name.  Robin Roberts' rendition of Galway City and Lomax's own "hillbilly" songs sound pretty incongruous but apparently these bits were designed for radio broadcast, contrasting the Irish and American versions of the same tunes or songs.

Lomax's first stop on the road was in Macroom in County Cork where he recorded Elizabeth Cronin, a well known and highly respected singer who was around 71 years old.  Cronin sings songs in English and Irish and her setting of Lord Gregory made a big impression on Lomax.  Also in Cork Lomax recorded Sean O'Suilleabhain and Diarmuid O'Riordan singing a two hand song, a sort of comic dialogue between the two, set to the tune of the jig The Connachtman's rambles.  O'Riordan also sings a short children's song made of a conversation with a cuckoo.

Moving on to Cuil Aodha (Coolea), Lomax recorded four young women in their twenties in the local Post Office which had an electricity supply.  Peigi Ni Scanlain has a sweet clear voice on her one song.  Maire Ni Shuilleabhain who sounds more refined, or convent trained as the notes suggest, had been extensively recorded by the BBC in 1949 and Lomax also gives her the lion's share of the recording session.  On the CD, Ni Shuilleabhain alternates between the other two singers, Gobnait Ni Chroinin and Maire Ni Cheochain, both of whom sound more true to the sean nos style of ornamented singing.  Seamus Ennis was clearly impressed by Ni Cheochain as he took up her air to Cois Abhann na Sead and adapted it to the pipes.

After three days in Cork Lomax moved on via Limerick to Galway intending to record Colm O'Caodhain one of Ennis's most productive sources in Conemara.  As Ennis had not moved on from Macroom, catching up on his drinking as Lomax noted, Lomax could not track O'Caodhain down.  Instead he recorded Bairtle Beag O'Conaola and Sean Jeac MacDonncha.  Both in their forties these two were excellent exponents of the sean nos style; open throated, full voiced and heavily decorated airs sung in Irish.  MacDonncha matches the great Joe Heaney in his delivery.  Understandably Lomax found the two men's style to be very foreign and almost oriental.  His attempts to find common ground by singing some American songs proved fruitless.  The questions and rather blank answers are all available in the Lomax Digital Archive on line at https://archive.culturalequity.org/node/776.  Sadly none of these songs made it onto the original LP.  Nevertheless, the eight songs from these two are highlights of CD 1.

Still waiting for Ennis, Lomax headed to Loughrea on 1 February 1951 to record Aggie Whyte, the East Galway fiddle player.  Aged 31, Whyte was the daughter of Tommy Whyte, founder of the Ballinakill Dance Players.  She had her first lessons from Jack Mulkere who besides teaching Irish to Lady Gregory, was a dedicated Irish fiddle teacher.  Her fiddle playing is steady, with a strong rhythm and wonderful tone.  Aggie has some very nice twists and variations in all her tunes, but particularly in an East Galway setting of The Irish Washerwoman.  Lomax would return to record Aggie with the rest of the Ballinakill Band later in the week.  For whatever reason, Aggie is given the surname White on this CD.

The second CD starts with three tracks from Colm O'Caodhain, Ennis having finally turned up.  The tracks on the CD include some conversation as gaeilge with Ennis.  The gist of the story is given in the sleeve notes.  At the same session Lomax recorded Meaigi Nic Donncha and five of her songs are included here.  Meaigi was about 40 years old and sang songs she had from her father, including nonsense songs set to well known dance tunes.

The next day Lomax returned to Galway city to record Aggie Whyte and the Ballinakill band, three fiddles, two flutes and two accordions.  Some of this session appears to have been designed to provide material for a radio show.  Lomax tries to draw similarities between the hillbilly string bands and the Irish ceilidh band and the transfer of Irish and Scots tunes to the USA.  Incidentally, Nicolas Carolan debunks this theory in the sleeve notes.  No wonder Lomax found Aggie to be "feisty", it must surely have seemed a strange thing to do on only a second meeting.  With no drums or piano accompaniment, the band tracks are simply lovely, proper ceili dance tunes with plenty of rhythm and drive.  Sadly Lomax had some of them cut short and we only get one and a half turns through The Lark in the Morning with its lovely twist to the second part.

After Galway, Lomax headed for Donegal to record Neillidh Boyle and Mickey Doherty.  The Boyle selections alternate with songs from Citi Ni Ghallchoir.  In her early 20s, Ni Ghallchoir lived in Gaoth Dhobhair (Gweedore) where there is still a strong singing tradition.  Boyle and Doherty have been the subject of extensive CD collections in recent years and both have been reviewed on this website.

On his way back to Dublin, Lomax recorded Sean 'Ac Donncha who was working as a teacher in Cavan.  Originally from Carna, 'Ac Donncha has since been well recorded and was highly regarded as a sean-nos singer.

Lomax recorded Seamus Ennis again before leaving Ireland on 10 February, after barely three weeks on the road.  On a return trip in April, Lomax recorded Elizabeth Cronin's son Michael and two of his songs are included on the CD.  Ennis provides a coda to the CD with tunes and songs.

Based in London, Lomax and Ennis then edited down the performers collected into the 34 tracks for the Columbia LP.  An significant aspect of that LP was that it was the first time that sean nos singing in Irish had been included on a commercial record.  Although he primarily followed Ennis's sources and recorded only enough to give him choice for the LP, Lomax nevertheless managed to record styles and repertoire that were current then but almost lost today.  The more complete selection on this CD set offers a wider perspective on the range of traditional music in the West of Ireland 70 years ago.

The booklet takes the listener back to those days and provides great context to the music and songs.  It also acts as a taster for some of the fine musicians and singers who have been featured.  Elizabeth Cronin can be heard more fully on the 2 CD set and book, recently republished The Songs of Elizabeth Cronin and, as already mentioned, the complete recorded work of Neillidh Boyle and Mickey Doherty are published by Cairdeas na phFidileiri; Boyle on a 3 CD set A Feeling in the Blood and Doherty on the 2 CD collection, Garvin Hill. The centenary of Aggie Whyte's birth was marked last year by the excellent eponymous 2 CD set put together by her grandson Michael Harrison, a record that must surely already be in the collection of every Irish fiddle enthusiast.

Overall this is a very interesting collection.  Even though much of the music has been available on CD or on-line for a while, the chronological presentation and excellent notes make this a worthy addition to the collection.  It's available from ITMA and Custy's.

A short review by your Editor of the tecnical and historical aspects of this project can be found HERE.