Perhaps the most famous of the travelling Donegal fiddle players, John Doherty, who died in 1980, was recorded on many occasions - indeed, collectors venturing into the area would have been considered mad not to want to make recordings of his sparkling playing. 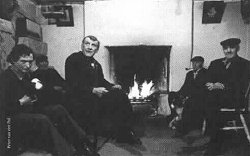 Amongst others, he was recorded by Alan Lomax in 1951, Peter Kennedy in 1953 and by the Irish Folklore Commission in 1957.  I believe that there is also a quantity of unreleased recordings held by RTE.

The current recordings were made over a period of six years, from 1968-1974 by Alun Evans, whilst John Doherty was being entertained at the house of Mickey Browne.  There are two things that immediately strike one about these recordings (as opposed to some of his others).  Firstly, the playing is relaxed - there is no let-up in the dynamic rhythmic bowing, or the forward momentum of the tunes, but the playing isn't 'driven'.  This results in some of the tunes, especially some of the reels, feeling as if they are being played at a slightly slower pace than he is often heard employing.  In some of his other recordings, there is the feeling that the player is 'on show' and is making a conscious effort to play for an audience.  These recordings lay back a little and give a wonderful example of his control of a tune.  I often feel when listening to some players, especially when playing reels, that they are reacting to the individual moments and features of a tune as and when they get to them.

With John Doherty's playing on this recording, I am more conscious of his grasp of the whole form of the tune; how each constituent part leads to, complements and contrasts the others, building up the concept of the tune as a complete entity.  (sound clip - Drops of Brandy)

I am also conscious of the slightly more luscious tone to be heard on these recordings.  By that I mean that he is playing a good quality instrument (an 18th century fiddle which Alun Evans acquired from Brian O'Donnell). 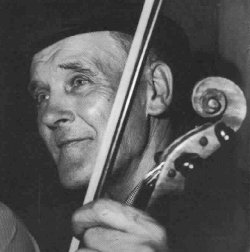 It has matured - been well played in - the treble acidity has been tamed and a pleasing uniformity of tone and response can be seen throughout its range.  (I have played the fiddle on which John Doherty performed when he was recorded by Peter Kennedy.  Although he professed to be well pleased with the instrument, it is a standard Stradivarious-type machine-made instrument, which, although adequate, doesn't have the same immediacy or evenness of tone that can be heard here).  In fact it is interesting to note the way that, on the fiddle used here, John Doherty's staccato bowing doesn't produce anywhere near so much extraneous noise as can be heard on other recordings.  This, I feel, doesn't lead to any lack of 'bite', but allows the full subtelty of his bowing style to be appreciated in all its glory.

The material that is to be found on this CD is varied.  There is, as might be expected, a preponderance of reels (17 in all) which comprise nearly 50% of the material.  These are complemented by varying types of jig, 5 marches and a spattering of highlands, hornpipes, a couple of airs and a strathspey.

There is the astonishing bagpipe imitation of The Enniskillen Dragoons, followed by the jig Nora Crionna, almost feathery in its nuances of bowing and tone manipulation, and which go to heighten the melodic and rhythmic variations which he employs.  (sound clip - jig running into reel)  Although I could echo the sentiments expressed by Jackie Small in his inlay card notes to Mickey Doherty's The Gravel Walks - " If there is a regrettable aspect ... it is that so comparatively little of the common, unconsidered music used for the local dances was collected.  The music may represent a sort of 'Sunday-best' preformance by the fiddler" - the material here presented is magical.  I should dearly like to know what other material was recorded by Alun Evans, (he says that he recorded "many hours" over a "six-year period", and although these are said to be "the best" there is bound to be a degree of subjectivity on that score!) 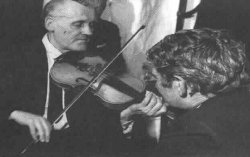 Here we get a couple of jigs used for the Lancers, and, given that John Doherty's repertoire was reputed to be vast,

this may be the tip of an iceberg of his more homely repertoire.  (sound clip - Lancers Jig running into Silver Slipper slip-jig)  It is to be hoped that there are enough recordings from this source to warrant another CD.  There are 53 minutes on this one - that means 25 minutes blank!

Anyway, this issue is beautifully produced, with a 32-page booklet, containing 2 pages of photographs, notes on the tunes, and a lengthy essay on John Doherty by Alun Evans which is a major contribution to the Donegal fiddle bibliography.  I was also impressed to see that there was a sticker on the CD case, allowing the title to be read in braille - something which puts other, larger companies to shame.

In short, this is an extraordinary recording of one of the greatest traditional fiddle players, and is an essential purchase.  We are in the debt of Alun Evans for making the recordings, Claddagh for appreciating their importance and according them such excellent presentation and, of course, John Doherty, simply for playing like that.