Donald MacLellan is one of the most esteemed living exponents of old-style Cape Breton fiddling.  In his own time, his father Big Ronald MacLellan was similarly marked out by his contemporaries - Dan R MacDonald, Bill Lamey and Donald Angus Beaton among them - as being the best fiddler that they had ever heard. 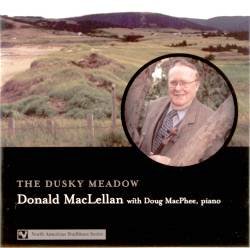 Add to this Donald MacLellan’s sister, Theresa MacLellan (see Am Pàipear, Oct 2002) and various other siblings, who are also revered in the island, and you have a family with musical talents and influence of almost royal proportions.

Despite the fact that MacLellan was 86 when recorded for this album, his bowing, lift, solid rhythm and complex ornamentation reveal a lifetime of playing, of ‘trying to perfect our music’ as he says.  It is no wonder that Kate Dunlay and David Greenberg chose him as the source for many of the detailed transcriptions in their book Traditional Violin Music of Cape Breton.

His repertoire, as sampled on the CD, ranges between tunes gleaned from old books such as The Atholl Collection, The Skye Collection, and McGlashan’s, to pieces learned orally from his father and other fiddlers.  One of the highlights is track 6, which begins with two of his own compositions - now as much a part of Cape Breton music as any - the strathspeys Compliments to Annabelle and Dusky Meadow.  These are followed on by the great pipe reels Sandy Cameron’s, The Marquis of Tullybardine and Sandy Duff.  Other tracks are crammed solid with masterpieces from the old Gaelic repertoire such as Muileann Dubh, Put Me in the Big Chest, and Fight About the Fireside alongside ones from Golden Age composers such as Marshall, Mackintosh and the Gows.

As with most Mark Wilson productions, the thick booklet included with the CD, which includes autobiographies of both the performers, is so complete and interesting in itself that it could easily be sold separately.  For instance, there are intriguing comments about the intermingling of oral and literate sources for tunes, dances that used to be led entirely by Gaelic mouth music, repertoire influences from pre-competition style pipers and the use of alternate tunings.

Like the tunes on it, this CD is every bit a real classic of Scottish music.