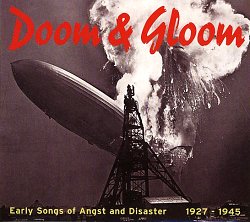 These are interesting times for anthologies of early recordings.  Time was, they tended to be put together to offer a general survey, or to illustrate regional characteristcs.  If there were themes, they tended to be fairly simple, like railway songs or instrumental features.  Rosetta Records in the 1980s put together selections that offered a revisionist, feminist view.  Stash Records highlighted dope songs.  In the same decade, it looked for a time as if the anthology would not survive Wolf’s, and later Document’s determination to reissue everything in complete/chronological collections in uniform black-and-white sleeves.  While some listeners were delighted to be able to hear, often for the first time, the complete works of artists they had previously only been able to sample, and to be able to compare different takes of the same song, others were less convinced by a policy that, by definition, insisted on including everything, regardless of its quality.  A well-compiled collection or anthology, this argument went, with each track carefully selected for its excellence and its aural clarity, and arranged in an order that would promote varied - and perhaps even educative - listening, was the way to attract new fans and satisfy long-standing ones.

In retrospect, it’s clear that this worry was misplaced.  Now that the complete, chronological project has more or less run its course there has been what you might describe as a new wave of compilations - see my review of Revenant’s American Primitive release, for one particularly distinctive example.  Trikont’s various selections have also been distinctive - often quirky and offbeat, but always thoughtful and interesting.  The anthology under review here is a good example, being a collection of songs in versions from recordings made between the late 1920s and the end of World War Two, on the subject of disasters, natural and man-made, large and small.  Here we hear of train wrecks, sinking ships, floods, fires, cyclones, wars, bombings, industrial accidents and more individual tragedies, like the damaging effects of drinking illegal alcohol and even the agony in the garden.

Many, if not most, tracks will be well-known to anyone who has been listening to early US recordings for any length of time, and some have been anthologised over and over again.  Bessie Smith’s Backwater Blues and Blind Willie Johnson’s Dark Was The Night must be two of the most reissued tracks of all time.  But then, it seems likely that this release isn’t aimed at such record buyers anyway - while some of us may not get as excited as we once did by the opportunity to listen to Charley Patton’s High Water Everywhere, the Carter Family’s Dying Soldier, Roy Acuff’s Wreck On The Highway and Charlie Poole’s Baltimore Fire - the standard stuff of a collection of blues and country music - the more general listener will find this a treasure trove of surprising and fascinating material, often in performances that are powerful, beautiful or brilliant, and sometimes all three.  Bear in mind, for a start, that the recordings just mentioned have been reissued often because they deserve to be - everybody should be able to enjoy Patton, Smith and Johnson at their potent best, the Carters and Acuff on top form and Poole being Poole.  There’s no doubt, either, that items like Big Joe Williams’ Providence Help The Poor People, the Dixon Brothers' School House Fire, Gid Tanner’s Skillet Lickers’ Wreck Of The Southern Old 97, Memphis Minnie’s Levee Breaks and Grayson & Whitter’s heartbreaking Coming To Us Dead represent their respective idioms at something like their very best.

Calamity and disaster are such essential subjects for traditional songs and contemporary songs in traditional contexts that the compiler has had plenty to choose from, so there’s no sense at any time that he’s having to stretch a point, or to include anything of lesser quality in order to fill the disc.  Comparatively minor figures like the Cofer Brothers and the Cauley Family (that fiddle interjection is a real killer) earn their place here very convincingly.  History as recounted in song lyrics might not always be reliable, but sometimes the performances have a lot to teach us about how people saw the event at the time - Karl & Harty’s song about their country’s use of the atom bomb (‘the answer to our fighting boys’ prayer’), being a classic example.

The sound quality is excellent and there’s a well-designed booklet, with notes by Christoph Wagner and Keith Chandler in both German and English.