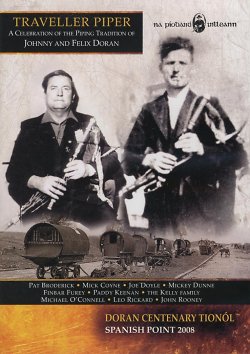 Traveller Piper features material filmed at the Doran Centenary Tionól (celebration) which took place at Spanish Point, Co Clare, in April 2008, celebrating the centenary of the birth of Johnny Doran, and includes contributions from Finbar Furey, Paddy Keenan, Mickey Dunne, Mick Coyne, John Rooney and Leo Rickard.  A series of interviews and performances detail the lives of these extraordinary musical brothers and their rich contribution to Irish traditional music.

The Doran brothers were brought up in Rathnew, Co Wicklow and were direct descendants of the great 19th century travelling Wexford piper John Cash.  Johnny died tragically in 1950 aged only 42 but fortunately the Irish Folklore Commission had made recordings of his music in 1947, a year before he was struck down by an accident.  These recordings were published by NPU in 1988.  Felix Doran spent his early years as a travelling musician, performing extensively all over Ireland before settling down in Manchester in the 1960s.  He died in 1972.  Recordings of Felix made in the 1960s were published by Topic Records (Felix Doran, The Last of the Travelling Pipers) four years after his death.

It may seem strange that I - neither a piper nor a particular aficionado of piping - should have chosen to review this splendid DVD; there are two reasons.  Firstly, I frequently heard Felix Doran play in the bar of the King's Head, Islington, when I helped run a folk club there in the late-sixties.  Also, I think that an enthusiastic review by someone such as myself might serve as a stronger recommendation to the ordinary reader than one by an expert - if I enjoy it, so may you!

I was lucky enough to hear the uilleann pipes rather earlier than many English people did: Francie McPeake back in 1962 at the Singer's Club; Seamus Ennis when we booked him at the King's Head Folk Club in 1968; and several other pipers (names forgotten or unknown) in The Laurel Tree and other Camden Town pubs when we lived there from 1967 to 1973.  I was always enthralled by the unique sound of this instrument, even when I didn't have the background to properly appreciate the music being played.  Today, I know enough to differentiate between Seamus Ennis, Willie Clancy, Leo Rowsome and Liam O'Flynn, and to recognise the sound of the Traveller style.

This DVD gives a fair account of what must have been a pretty wonderful weekend at Spanish Point in April 2008, and captures the enthusiasm and excitement of the participants.  It also scores highly over so many other similar publications in that it (usually) allows you to hear the whole of a piece of music, rather than fading out in the middle - in case you might be getting bored!  Thank God for organisations like NPU who treat their subject with seriousness and proper respect - and God damn those who want to call this approach elitist!

We get an hour and 15 minutes on this disc, and almost an hour of that is music.  The playing is of variable quality - from a perfect example of a young player who can do all the (numerous) notes, but not a great deal of the music, to the quiet, relaxed, un-flashy playing of an old hand like Mickey Dunne ... who I really enjoyed.  But the high points, musically speaking, are when Finbar Furey and Paddy Keenan perform.  All right, I know they both used to be flashy buggers, but time seems to have calmed and aged them well, and both are an absolute delight here.  The quite extraordinary finale to the final concert finds them playing a slow air together.  Maybe it doesn't do a great deal for the lovely tune, but the sheer exhilaration and fun of their playing together is something I shall cherish for the rest of my days.  I would cheerfully pay the €25 price of this excellent DVD for this track alone!

It's not completely without faults, of course: the worst being that none of the tunes played are named, either on the disc or on the sleeve; the camera dwells too frequently on the dour visage of presenter Peter Browne; and also a couple of the inclusions are, I feel, a little debatable - but nothing to prevent this being a very worthwhile purchase.

If this non-specialist review has convinced you, buy it from NPU at: http://store.pipers.ie/store/