David Doucet is the guitarist for Beausoleil, one of Louisiana's more innovative Cajun bands, and brother of Michael, the band's fiddler, leader and Cajun musicologist.  What he presents here is an almost entirely new concept; solo Cajun guitar.  "Won't work!" I hear people cry (myself included).  The thing is, it mostly does.

The only times this has been tried to any effect before, to my knowledge, have been on albums by Richard Fontenot (Folkways label), who plays a smooth-sounding electric style, and a little-known guitarist named Roger Mason (Chante du Monde Label). 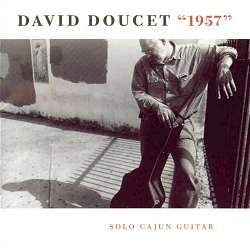 The latter's simple but musical and effective style made a big impression on Doucet, who has always played strong flatpicked solos in Beausoleil, whilst fingerpicking for his own enjoyment.  The result is a selection of tunes and songs, mostly from the tradition, with a refreshing new feel.

The album starts with Lake Arthur Stomp, originally a fiddle tune, latterly used as a test-piece for accordionists and fiddlers alike.  David plays this three-part melody with great drive, capturing the feel of the hammering Cajun accordion style, and at the same time underpinning the tune with a strong bass-beat on the bottom strings.  The Cowboy Waltz follows, its melancholy mood echoing the Dennis McGee original, telling of a search by an old "vacher" for a lost love.  The warmth and sway of the playing here could quite happily satisfy the dancers, and the tune itself clearly floats along on top.

Iry LeJeune's J'ai Fait Une Grosse Erreur waltzes along nicely, again sounding very full as far as the guitar playing goes, although I can't help thinking that it feels a little bit too jolly, as the raconteur has just realized what a big mistake it was to leave his lover!  One thing that possibly limits a solo guitar in this context is its inability to play the long, drawn-out notes that the fiddle and accordion use to great punctuative effect, although I can't honestly say that this greatly detracts from the music here.

Digging deeper for source tunes, Doucet has included two pieces from the 1934 Louisiana field recordings by John and Alan Lomax, and one from the repertoire of Delma Lachney (both reviewed in Musical Traditions).  Wayne Perry's Cajun Waltz is a great example of a simple, yet beautiful melody, from a musician whose legacy of unusual tunes might have disappeared had it not been for the foresight of the Lomaxes, and the enthusiasm of people like Doucet, who are keeping them alive today.  He reproduces various fiddle techniques, transferring the slides and ornamentation of the originals to his guitar with a feeling of ease, and breathes new life into the tunes, whilst maintaining the intensity of songs such as Lachney's Baiolle and the wonderful ballad J'ai Marie un Ouvrier.  Two songs, Tu Peux Pas Me Faire Ca and Une Piastre Ici, Une Piastre La-Bas, are taken from the string-band era of the 'thirties; the Texas swing influence appearing in the French music of the time, and David channels the humorous subjects of these into his playing.

This album came as a pleasant surprise to me as I tend to be a bit of an old traddy about Cajun music.  The singing is not quite my cup of tea but is by no means bad, and it fits with the gentle 'late night listening' feel of the album, something that most Cajun music, being dance-based, does not lend itself to easily.  Highly recommended, and proof that the tunes in this genre can be taken somewhere new instrumentally and survive intact.