The Stuff that Dreams are made of

Some years ago an American acquaintance gave me a list of the 'three things that you will never see in your life'.  I can still remember two of these 'things' - they were 'a contented farmer' and 'a dead donkey' - though, sadly, the third item on the list has now slipped my mind.  I wonder if there was ever a similar list of things that you would never expect to hear in your life? 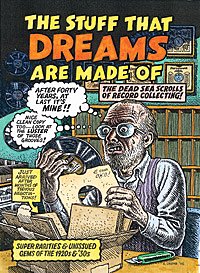 Well, in my case, such a list would have to include two 'missing' Paramount 78's of outstanding Mississippi blues-singers, the first by Willie Brown and the second by Son House.  Now, believe it or not, the Son House has, at last, turned up -slightly scratched and battered - but nevertheless brilliant!  And it has just been reissued on a double set of CDs The Stuff That Dreams are Made Of - The Dead Sea Scrolls of Record Collecting (Yazoo CD 2202).  The album is subtitled Super Rarities & Unissued Gems of the 1920's & '30s and whilst a number of items are heard here on CD for the first time, it must be said that some tracks have been reissued previously elsewhere.  It seems that Yazoo are of the opinion that if only one-known copy of a 78 exists, then this is the place for it - no matter if it has already been reissued elsewhere.  But, as I said, there are some new reissues here.  The Son House coupling, Mississippi County Farm Blues / Clarksdale Moan will have the blues-aficionados salivating; while the Georgia Pot Lickers' Up Jumped the Rabbit / Chicken Don't Roost Too High will no-doubt do the same for the Old-Timey fans.

And, of course, there is more to these albums than just these two killer 78s.  For a start there are fascinating solo fiddle tracks from J D Harris (The Grey Eagle) and Osey Helton (Green River), two fiddlers who are new to me.  There is a duet piano track by Smith & Irvine (Lonesome Road Blues), and the notes offer the suggestion that the unknown Mr Smith could possibly have been the father of the multi-talented Hobart Smith, who was recorded by Alan Lomax and many others.  At times it certainly shows a resemblance to Hobart's piano work, but I guess that the jury is still out on this one.  There is a stunning version of the song The Battleship of Maine performed by Wilmer Watts and the Lonely Eagles (as Fightin' in the War with Spain), and, likewise, a splendid version of the old-timey fiddle & banjo tune I'm Gonna Marry that Pretty Little Girl from the Sweet Brothers of Galax, Va.

Other pieces should be well-known to seasoned listeners.  These include Croquet Habits by Freeny's Barn Dance Orchestra from Mississippi, Old Timbrook Blues by 12-string master John Bird, Slidin' Delta by Tommy Johnson (and I remember the excitement when this 78 was first discovered some 35-40 years ago!), Police and High Sheriff Come Ridin' Down by Ollis Martin, I'm Going Back Home by Memphis Minnie & Joe McCoy, I'm Leaving Town by William Harris, Original Stack o Lee Blues by The Down Home Boys, Ain't That Trouble in Mind by the Grayson County Railsplitters, Old Rub Alcohol Blues from the magnificent Dock Boggs, Bound Steel Blues by Bill Shepherd with Hayes Shepherd & Ed Webb, Jim Strainer Blues from the Memphis Jug Band, two gems from Jaybird Coleman (Mistrearin' Mama and Boll Weevil), Luke Jordan's If I Call You Mama, My Mind is to Marry by Grayson & Whitter and King Solomon Hill's Whoopee Blues (the alternate take, sung without falsetto).

And this still leaves us with quite a few other beauties that come from various American traditions.  There are blues singers like Lottie Kimbrough, Jesse 'Babyface' Thomas, Yank Rachel & Sleepy John Estes, and Geeshie Wiley.  'Cowboy' singer Ken Maynard gives us a previously unissued Sweet Betsy from Pike, while the Crowder Brothers pitch in with an early sentimental country duet about their mother (We All Love Mother), which, again, was originally unissued.  There is an excellent track from Cajun performers Amedie Ardoin & Dennis McGee (Two Step De La Prairie Soileau), there are a couple of Gospel pieces (including a real oddity Bells of Love from a group that went under the name of the Middle Georgia Singing Convention No.  1, although perhaps the biggest surprise is the so-called John Hardy Blues sung and played by Roy Harvey & Jess Johnston.  I say surprise because, following an introductory verse about John Hardy the song then plunges straight into a version of the old ballad The Maid Freed from the Gallows (Child 95).  It's an interesting find and one that was missed by Meade, Spottswood & Meade in their valuable, and ground-breaking, work Country Music Sources - A Biblio-Discography of Commercially Recorded Traditional Music (Chapel Hill, 2002.  See page 3).  Another lovely find is Chubby Parker's wonderful Davey Crockett, sung behind a rolling banjo and mouthorgan.  Parker may not be everybody's idea of a 'rare' performer (his version of The Frog and the Mouse -or King Kong Kitchie, Kitchie Ki-Me-O - on the Folkways anthology is well-known), but it seems that the Davey Crockett 78 has only just turned up! So here it is in all its glory.  And (the list just goes on and on) there are a couple of splendid instrumental tracks, Alabama Blues by the Three Stripped Gears and Wild Cat Rag by Asa Martin & Roy Hobbs, that are crying out to be heard.

So, a superb collection of goodies that will send shivers down the spines of both blues and old-timey enthusiasts.  Any problems?  Well, to my way of thinking, yes.  The package comes with a booklet of notes by Richard Nevins that just fails to do justice to the material on the CDs.  Basically the booklet deals with that odd band of eccentrics known as 'record collectors'.  Now, don't get me wrong.  Without these characters - and I really do mean 'characters', check out the DVD of record collector extraordinaire Joe Bussard to get some idea of what I mean (Desperate Man Blues, available from the good people at Red Lick) - there would be no issues such as The Stuff That Dreams are Made Of.  But, I have always been struck by the sheer oddness of many of these people.  The infrequent magazine 78 Quarterly, written by and for such people, is another example of this incestuous world.  Nor should we forget the occasional forays into record collecting that can be found in the work of Robert Crumb (another collector, incidentally) who provides the cover illustration to this set.

Nevin's booklet has little to do with the records and the artists who performed on them, but rather deals with 'collectors' and, in a cod-psychological sort of way, what it is that drives them to collect.  (Robert Crumb's cover art, by the way, says more about collectors than any of Nevin's words can.  The picture shows Crumb, seated at a table in front of his record collection, opening a recently arrived package and extracting a 'new' 78.  Sweat pouring from his brow, eyes bulging in expectation, a thought bubble rising with the words, 'After forty years, at last it's MINE!!!  Nice clean copy too … Look at the LUSTER of those grooves!'  Hmm!  Eat your heart out Dr Freud.  But, really, if you want to know why a collector collects, have a look at some of the standard books on the subject, such as Collecting - an Unruly Passion by Werner Muensterberger (Princeton, 1994) or, better still, On Collecting - an Investigation into Collecting in the European Tradition by Susan M Pearce (Routledge, 1995).  Incidentally, though, Nevins does make one point that I find fascinating - namely that many record 78rpm collectors don't actually play their records.  Its all do with owning rarities, and not with the music that is contained within the grooves, apparently.

But, don't let me put you off buying this package.  Forget the booklet (though not the R Crumb cover!), sit back, and just let this double collection of musical gems flow through your veins.  At the moment Red Lick are offering the 2 CDs at half-price, so give them a ring (01766512151) or check out their web-site at: www.redlick.com   The offer won't be there for ever!

Now, back to the missing Willie Brown Paramount.  Could this too be about to resurface at long last?  Oh Willie, where art thou?