The Return of The Stuff that Dreams are Made Of 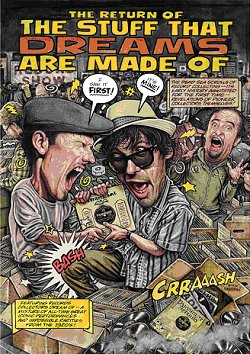 Can it really be six years since Yazoo Records issued The Stuff that Dreams are made of, a double CD set of obscure 78rpm records?  I said at the time that Robert Crumb's cover art just about summed up the album's contents - namely, some mouth-wateringly rare reissues.  Two tracks were especially exciting to me, being first-time reissues of a very rare Son House Paramount.  And, for a bonus, we also had two recently discovered sides by the Georgia Pot Lickers.  Sadly, this newly issued Return is nothing like as exciting, as most of the tracks are readily available on other reissue CDs - including many of Yazoo's own albums.  True, we do have Blind Blake's Sun to Sun Blues, reissued here for the first time.  But, since its discovery in 2007, we have been able to hear the track on Marshall Wyatt's Old Hat Records website for free (a really nice touch this, good on you, Marshall).

So what is going on here?  According to the booklet notes: 'In the first volume of Stuff That Dreams Are Made Of, we featured exclusively recordings whose incredibly rarity and mystique defined them as collector's icons.  In this volume we offer as well another interpretation of the project title, presenting performances that rank near the top for their consummate, often transcendent, artistry - they too are the stuff that collectors dream of, the great iconic recordings that no collection should be without.' In other words, this is a two volume set of great recordings which, I suspect, many CD collectors will already have in their collections.

Mind you, having said that, I must add that the sound quality of the recordings heard here is quite superb and the booklet far more interesting than the one issued with the first Stuff set - though the lack of notes relating to the actual tracks is a bit of a pain, and I am not impressed with the comment that listeners can Google the songs/performers themselves! But, like I said, there are some really great tracks to be heard here.  This is what Richard Nevins has to say about one of my favourite sides that is included: 'Often times at collectors' get togethers the question is posed, "What is the single greatest record of all time?" Most temperate people tend to reply that there are 'so many' great records and so much is dependent upon the tastes and inclinations of individuals.  Not me! I always state with no hesitation or qualification whatsoever that the greatest record of all times is Sail Away Ladies by Uncle Dave Macon and his Fruit Jar Drinkers.  No other record has ever combined in one performance such high degrees of joyous celebration, uninhibited exuberance, emotive expressiveness (especially in the tune's transcendent high part), pure power and infectious rhythm.' As I have previously written in Musical Traditions that, 'some of Uncle Dave Macon's recordings, especially those made with The Fruit Jar Drinkers, are possibly the best examples of Old-Timey music ever made,'

1 I am hardly likely to disagree with Richard.  Mind you, Walter Smith's Otto Wood the Bandit - not included in this set - is also up there with the best, and is the one piece that I would rate as almost equal to Sail Away Ladies.

Returning to the 'do-it-yourself Google' attitude, I doubt if listeners will find out exactly who Elder Golden P.  Harris was by simply inputting the name.  But, thanks to the excellent book that accompanies the 6 CD set Goodbye Babylon on the Dust-to-Digital label we can say that he was born in 1897 and that he died in 1964.  He lived in Indian Valley in Floyd County, Virginia, and played fiddle for local dances before joining the Primitive Baptist Church in 1921.  I wonder if he ever played with the Floyd County Ramblers?  Nor is there much on line about the Cartwright Brothers, who recorded in Texas in the late 1920s & '30s.  To find them we have to hunt out a long out-of-print issue of Tony Russell's much missed Old Time Music magazine.  All that I can add is that the tune used for the Cartwright Brother's song Texas Ranger was also used for a number of other songs, including the version of The Rowan County Crew as sung by Robert L Day on the Yazoo seven CD set Kentucky Mountain Music.  It is, I am sure, one of those tunes that started life in the northern woods before moving south, though I suppose that it could possibly have originally started out somewhere in Ireland, before making its way across the Atlantic.

As to the rest of the performers, well, they range from such blues greats as Bukka White (The Panama Limited), Tommy Johnson (Lonesome Home Blues),Charley Patton (Some These Days I'll be Gone), Robert Wilkins (That's No Way to get Along) and Lottie Kimbrough (Rolling Log Blues) to old-timey singers and string-bands like Hayes Shepherd (Hard for to Love), The Carter Brothers and Son (Old Jaw Bone), Charlie Poole (Milwaukee Blues), The Lewis Brothers (Bull at the Wagon) and Fiddling Sam Long (Seneca Square Dance). For some reason or other there are two Irish recordings, by Packie Dolan and His Boys and E Mullaney & P Stack, and a couple of Eastern European tracks from Karola Stocha & S Bachleda and the Orkiestra Majkuta.  And, just to round things off, there are a couple of religious pieces, Blind Willie Johnson's Jesus Make Up My Dying Bed and a recording of I'm A Long Time Traveling Away from Home by Allison's Sacred Harp Singers.  Blind Willie, as ever, is just magnificent, whereas the Sacred Harp Singers sound as though they really have been travelling for a considerable time, and need a rest.

The booklet notes mention 'future issues', though whether or not these will be like Volume 1, rather than Volume 2 reviewed here, is yet to be seen.  If Yazoo are planning to reissue material that is already available on their own label, then I cannot see too many people buying these albums.  But, we live in hope, and I am still hoping one day to hear that missing Willie Brown Paramount.  Who knows, if it ever does surface, then that really would be The Stuff that Dreams are made of.