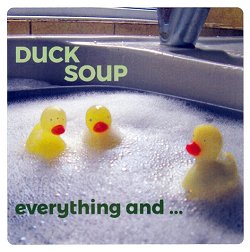 Anyway, here we are, seven years later, with Duck Soup's third CD ... and it's as delightful as you might expect.  The playing throughout, from all three participants, is superb - as is the recording quality.  And I have to say that Adam Bushell continues to delight upon all the plethora of instruments he uses here - particularly some really accurate musical saw playing on Li'l King of Everything.

We get songs and tunes from all over the place here, including a scattering (as usual) from Alfred Montmarquette, a number from close to home, Sussex, and ranging as far away as Los Lobos! (sound clip above).  All fit happily together under the 'things that have tickled our fancy' label.  And what better reason for making a CD can you think of?  That said, it's a little difficult to pick out individual tracks from what is a coherent whole - but a couple of things did stand out for me.

We start with Hornpipe, which is the fourth movement of Suite for Accordion by Howard Skempton ... and more like a polka, in my opinion.  While not being known for contemporary classical music, Duck Soup just couldn't keep their hands off it!  Then, Mrs Jamieson's Favourite is a lovely slow slow march, learned from Joe Hutton, which moves - with a rather startling key change (I feel) - into The Drowned Lover in a key which is (I think) slightly too high for Dan to sing comfortably ... but he makes up for it with The Golden Glove.  I don't know what Vaughan Williams wrote down when he collected it from Mrs Humphreys of Ingrave in 1904, nor to what extent Dan has made it his own, but I reckon this is the best version and best performance of this song I've heard since the wonderful Frank Hinchliffe sang his version of the song to Mike Yates in 1976.

When you've made humour the basis of your appeal, it must be difficult to keep it up all the way though your third CD ... and I feel that this one should be viewed simply as a selection of unusual material, played very well, rather than 'another of those funny Duck Soup records'.  Perhaps the best bit of musical humour is kept for the final chord of the last track.  Since we've now been told how George Martin did it foe the Beatles, it's a delight to find it used here on the 70 second fade-out ... followed by the announcement "Dear Listener.  Thank you for listening to the whole of this track, including the fade-out.  Duck Soup appreciate your attention to detail.  You may press Stop ... now!"

Finally - for the second time this week (truly) I find myself asking why a CD's tracklist should be displayed with tracks 1 to 6 as SIDE ONE and tracks 7 to 13 as SIDE TWO?