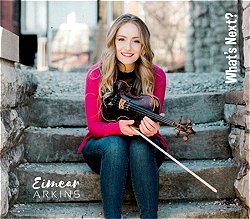 Eimear's email, asking if I'd care to review her debut CD, concluded "PS - I particularly enjoyed your review of Shane Mulchrone's Solid Ground.  What a mighty CD!"  Now that's the way to get a reviewer on your side!

She need not have bothered however, since I really like her CD.  Eimear Arkins is a multi-instrumentalist, singer and dancer from Ruan in County Clare, and holds eleven solo All-Ireland Fleadh Cheoil titles.  Her online biog indicates that she's packed a great deal into a very few years - if her photos accurately reflect her age!  So it's wonderful to be able to say that, for one so young, she exhibits no 'flash' whatsoever in either her playing or singing.  It's also a great relief to be able to report that a CD described as 'solo' is really that - and doesn't actually feature half a dozen famous guest musicians and singers, as so often seems to be the case these days.  She occasionally plays very tasteful back-up (sometimes as an overdub) on guitar or harp - and rarely uses those annoying (to me!) 'ripple' chords so beloved of harpists.

Track 1 is a set of reels, played fairly slowly, on a fiddle that sounds (and looks in the photos) fairly old.  As with Shane Mulchrone's first track, this makes a lovely start to the record.  We then get three songs - in fact, despite the cover photo, eight of the twelve tracks are songs; three in Irish, five in English.  To begin with, her singing didn't sound very impressive - but when I got used to her style, I found it utterly engaging.  She manages to capture your attention without any obvious ploys - very much as Lucy Farrell does.  And, from me, that's high praise indeed.  And I don't think she sticks to a regular rhythm in any of these songs - which is a total delight.  Here's a little of Úna Dheas Ní Niadh.

Track 5 is three fiddle jigs, the first of which is her own composition, and gives the title to this lovely CD.  Two more songs and hornpipe/reels set follow - the hornpipe, Father Bernie's comes from Rhode Island.  It's a cracker ... but I can't do sound-clips for every good track!  But I will for the wonderfully titled I've A House of My Own With a Chimney Built On Top Of It, a great slip-jig from Junior Crehan.  This is quite a long clip, to show the interesting change into the second tune.

I just love this record - I've only played it right through twice, but it has me in thrall.  I can't think of another 'modern' CD of Irish music to have done that since the fabulous McNamara Family's Leitrim's Hidden Treasure back in 1999!