Eileen O'Brien is a fiddle player of immense talent.  On this CD she is joined by Deirdre McSherry on piano for an hour of beautifully executed tunes.  Eileen is the daughter of Paddy O'Brien from Nenagh, Co Tipperary, who was highly regarded as a box player and composer of tunes. 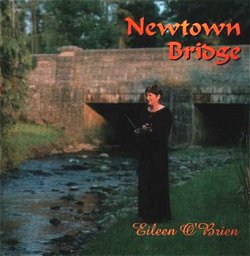 After his death in 1991, an annual music and arts festival was started in his memory.  This CD was launched at Aonach Paddy O'Brien in August 1999 but has been hard to find.

Eileen's musical pedigree is second to none, music came to her not just from her father, Dinny O'Brien was her grandfather, and Sean Ryan the fiddler was her uncle.  Through her mother, who is a former Feis Ceol singing champion, she is related to Sean Seery, the Dublin piper.  Eileen champions that heritage in every tune she plays.

A few years ago she recorded a CD with accordion player Willie Fogarty which showcased her Daddy's compositions.  On this CD her father's music is again given prominence.  Tune titles such as the pair of jigs The One that was Lost and The Caddy's Fancy hint at Paddy's recreational interests.  Paddy O'Brien's compositions have an unmistakable feeling about them.  While based in fairly standard modes, they always have an unexpected twist to the pattern and a lonesome touch.

Other great composers of recent times are featured here as well.  There are some of Paddy Fahy's compositions which sit neatly under Eileen's nimble fingers.  It's a nice touch that Eileen checked with Paddy before she recorded his tunes.  Paddy O'Brien was a member of the Aughrim Slopes Ceili band with Paddy Fahy, and over the years the two Paddys played their compositions to each other to seek approval or comment.  Another East Galway composer Paddy Kelly is credited with writing St Ruth's Bush which Eileen combines with an Ed Reavy composition and The Whistling Postman for a selection of reels that is hard to beat.  Eileen's own skills as a composer are evident in the slow air Tribute to Jimmy McHugh, Jennifer's Waltz, written for her daughter, and the reel The Bounty Hunter which fits well alongside the other dance tunes on the CD.

Eileen O'Brien plays in a very neat, seemingly effortless style, yet she imparts a great drive and rhythm to her music.  The music is played at a pleasantly brisk pace but it's never fast.  She has the ability to make light of complex keys and her ornamentation is simply wonderful.  Triplets and rolls are introduced with great taste and while there is always something going on, the music never sounds fussy or overplayed.  Eileen's command of the instrument shows through on everything she plays and the end result is faultless.  There is some double tracking on the Carolan piece Fanny Power and Eileen also includes two songs on the CD.

The contribution of Deirdre McSherry makes this a very special record.  Deirdre also lives in Nenagh and has been playing with Eileen on a regular basis for the last few years.  A very talented flute player, although she only plays on two tracks on the CD, Deirdre is probably the best piano player we've ever heard.  She follows the tune so closely and adds great lift to the music.  What sets her apart is the creativity in the accompaniment and the way she uses the whole range of the piano to subtly vary the feeling of a tune on the repeat.  The result is more like a duet between fiddle and piano than a solo instrument accompanied on piano.  Deirdre McSherry plays a Boehm system flute which allows her to match Eileen note for note even in the unusual and difficult keys.  The Old Road to Garry a four part reel in C, which ends the CD, shows how closely the flute and fiddle play together.

The production of the CD is first class.  The balance between the fiddle and piano allows both to be heard clearly without either dominating.  Sadly, the sleeve notes are fairly brief and give little additional information about how her father composed the tunes included here.  All the composers are identified through the track listing.

This CD gives plenty of reasons why Eileen O'Brien is held in such high regard by Irish musicians across the country.  Try Custy's website or the Claddagh website if your local distributor has problems getting a copy of this CD.