This double CD album consists of a mixture of songs and piano music recorded in two sessions (1992 and 2004) by the settled traveller singer, Elizabeth Stewart of Fetterangus, in North-East Scotland.  This region, lauded by Francis Child and many others, has been famed for centuries for its richness of traditional music and song. 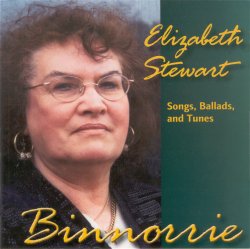 The recently published eight volume Greig-Duncan Folk Song Collection was largely amassed hereabouts in the decade before the Great War of 1914-18, and it is gratifying to see that virtually all of Elizabeth's songs in this album (apart from her own compositions), appeared in that Collection, showing how just how much the modern Traveller tradition has carefully preserved.

Elizabeth's grandparents settled in a working croft adjacent to traveller camping grounds, where 'They were like a magnet, drawing fellow travellers to the area', with her family sharing in their lively music and song.  The world's attention was first drawn to them when Hamish Henderson sought out her aunt Lucy Stewart in 1955, whom Kenneth Goldstein recorded extensively for 1961 Folkways recordings.  Lucy was an important influence on Elizabeth, as was her mother, who ran the family dance band, and this convergence of traditional song and modern dance playing is one of the factors that has made Elizabeth unique, especially when she progressed to leading her own band.

Like so many traditional singers, especially traveller, her tastes have been wide-ranging, encompassing blues, rock-and-roll, Country & Western, classical and dance music; this album concentrates principally on her unaccompanied singing of the 'auld sangs' in 'the Stewart way o it', with some piano medleys added.  Although these medleys are lively and entertaining, there are no performances of her Scottish Country dance settings of traditional songs, such as her unforgettably rumbustious singing and playing of The Jolly Beggar as a Gay Gordons, or the Boston Two-Step version of Macpherson's Rant.  This is a great shame, for in this manner she has successfully brought traditional repertoire into modern performances, with great joy and little loss of 'purity'.

Even in the 'pure' sense, Elizabeth presses forward the tradition by composing songs with both new and old words, set to her own tunes, themselves clearly embedded in those of the past.  Her style - or styles, rather, are well demonstrated on these CDs - lively, heartwarming singing of the likes of The Jolly Beggar and Hish-ee-ba, and with the added jauntiness of [Here Comes a] Russian Jew (Tom McKean's copious Notes kindly credit me with an assistance I am rather vague about, except for my wife suggesting to him that this last song's curious title was a corruption of the Gaelic for 'How are you today?'), together with her hallmark performances of the 'big' ballads.  Anyone wanting to learn how to perform these classical songs should, for example, listen carefully to her moving performance of I Aince Had a Lass to see how beautifully she handles this North-East version - the bitterest of these bitter 'False Bride' songs - and take in the delicacy and control of her phrasing, the skilled use of minimal ornamentation, and the heartrending clarity of story and tune.

Illness, cheerfully borne, has dogged her of late, and there was a time when she dropped out of public performances for a number of years following the deaths of so many of her family; it is good to see that she has rallied and begun appearing again with a new confidence.  Previously a shy singer with little realisation of just how uniquely good she is, Elizabeth has now moved on occasion to employing a more robust declamatory style of singing, not unlike that of her great-uncle Davy Stewart.  This style can sometimes blur the words - and none are given in the booklet.

In the first CD rather many of the 2004 songs have a slow pace and rather similar-sounding tunes, and the attractive 'catch' in her voice, so well heard in the 1992 tracks, has become roughened in places.  This could have been alleviated by alternating more of her brighter pieces such as I'm a Good Looking Widow, Little Ball o Yarn, Hey Donal, Ho Donal or Come A' Ye Fisher Lassies [one of the finest of 'fake traditional' songs] which enliven the second CD.  As well as her 2004 version of The Gypsy Laddies this second CD also has lovely 1992 versions of Two Pretty Boys, I Aince had a Lass, and the song her Aunt Lucy gave to the Revival, The Plooman Laddies, that unusual celebration of those proud and desirable horsemen as seen, for once, through the eyes of one of their many enamoured young women.

Another of Elizabeth's hallmarks is her originality, for she very often presents versions with unusual words or tunes.  This is partly because she can pick and choose freely from the remarkably wide repertoire she inherited but also because she writes and composes fine songs within the tradition, to be heard here in the form of Lord Gordon's Bonnie Boys and The Foreign Sailor.  Added to this is her eclectic liking for music-hall and other wide-ranging songs such as Peer Wee Jockie Clark, The Russian Jew, I'm a Good Looking Widow, Hey Donal, Ho Donal and The Gallant Rangers.

The accompanying booklet is well presented, with many interesting photographs and a good historical account of Elizabeth and her background by Alison McMorland, the producer of the album.  There are typically thorough, copious song notes by Tom McKean, although as David Bertie, editor of John Skinner: Collected Works (2005), states, there has never been any evidence that any version of The Yowie [little ewe] wi the Crookit Horn, a lament for a rustled pet sheep, actually referred to an illicit whisky still.  Yet the booklet as a whole does have one serious lack, without which no presentation of traditional song, aimed at encouraging folk to carry on that tradition, should ever be issued: there are no words to the songs.  It does state that these will appear in a book, Doon the Dukker: Traditions from a Travelling Family by Elizabeth and Alison McMorland, and Alison tells me that this is in the final stages of preparation.  Nevertheless, until it appears, many who purchase this album may be unable to make out all words, (sadly, fewer still may eventually send for the book), and their educational purpose may be lost.  The Elphinstone Institute should ensure that future issues in this Traveller Traditions of North-East Scotland series, aimed at highlighting balladry and music 'in danger of being overlooked and forgotten', do not repeat this mistake.

Incidentally, Elizabeth's 1992 cassette Atween You and Me (Hightop Imagery HTI 001) states that she 'makes no copyright claim in respect of the traditional songs contained in this tape'; in Binnorrie this changes to 'All songs and tune arrangements remain the copyright of Elizabeth Stewart'.  Fair enough for her own compositions, but thank goodness nobody ever takes any notice of such claims with regard to traditional song recordings, otherwise the tradition itself would have long since shuddered to a grinding halt.

All in all, an album well worth having, both to experience an original singer of great skill and beauty (both moving and highly entertaining) and to hear and learn a wide range of songs lovingly preserved and extended by this family from a once universal North-East music and song tradition.  Let's hope that Elizabeth will go on to record more of her fascinating repertoire, including not only her lovely versions of The College Boy [Young Craigston], The Battle of Harlaw and The Laird o Drum, but also interlacing them with her foot-stamping 'dance ballads'.  Kittredge suggested that it was the 'singing, dancing throng' which long ago initiated balladry; Elizabeth's versions might well convince you.