Having reviewed, and liked, Cordelia's Dad's last traditional CD, Spine, I was pleased to find this one on the doormat a while ago.  I was also interested to see whether an hour of exposure to Tim Eriksen, 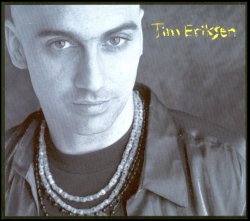 solo, would be as rewarding as a similar time spent in the company of his band.  Inevitably, I suppose, the answer has to be 'Yes and no.'

He starts, as he does many of his live gigs, with Farewell to Old Bedford - a song from the singing of Lee Monroe Presnell, of Beech Mountain, NC.  This is the high and lonesome sound of Appalachian unaccompanied singing at its most extreme,

you might say, and Tim certainly gives it all he's got.  It is, quite definitely, a stunning performance (sound clip).  If you own a copy of the excellent CD of Anne and Frank Warner's collection, Her Bright Smile Haunts Me Still (Appleseed APR CD 1035), you can make a direct comparison of the two singers.  The immediate thought which springs to my mind is that Lee is some 40 years older than Tim - and that it shows.  He takes the song a little faster and uses a more declamatory style; you detect the passion of the singer as the song progresses.  With Tim's performance (definitely the right word!), you are presented with it, on a plate, from the first line.  However, I don't mind this approach too much - imagining that Lee might have sung it this way himself as a younger, more energetic, man.

We move to Boston - a version of The Silkmerchant's Daughter - which comes from an MS of songs written down by an American named Timothy Connor, whist imprisoned in Plymouth (England) during the Revolution.

It's a somewhat fuller story that is often the case with this ballad, and comes with a fine self-composed tune from Tim; and with guitar accompaniment.  What a pleasure it is to hear a performance where the voice leads the guitar, rather than vice versa, as is so often the case (sound clip).

For me, the rest of the CD then slips away into a series of less notable performances which, with a couple of exceptions, do not really live up to the promise of the first two tracks.  One might suppose that these less flamboyant items are poorly served by being presented on a record rather than in reality, but I felt much the same when I saw Tim live during his last UK tour.  A whole CD of Farewell to Old Bedfords would be unbearable, I'll agree, but he needs to find a way of communicating the feelings he undoubtedly has for these other songs - a way of including the listener within his picture of the song.  There's too much self-absorption demonstrated on several of the tracks, I think.  Village Churchyard - a song from Rocoe Holcomb - is a case in point.  There seems, to me, no way a listener can enter the private universe Tim conjures in this song; indeed, the over-elaborate (though highly skilled) singing moves the piece irredeemably into the 'art as object' genre.  The song becomes a private thing - a thing which has little real function for anyone but the singer.

Tim is, as I said in the previous review, a fine fretless banjo player, as he demonstrates again on this CD with Last Chance.  However, while almost five minutes of a fairly simple tune may be a delight to play, it's more than you need to listen to as a recording.

I mentioned 'a couple of exceptions' earlier.  These are The Brown Girl - Frank Proffitt's version of Lord Thomas and Fair Eleanor - which is a great pleasure from start to finish.  Well, almost to the finish ... I can't see any need to play the tune again on the guitar after the conclusion of the ballad.  The other is, I feel, the most enjoyable track on the whole disc.

Mobile Serenade Polka / Shep Jones' Hornpipe are superbly played on the guitar - but it's not the wonderful technique which impresses, so much as the sheer exuberance of the playing.  For almost the only time on the record, you are sure that Tim is truly enjoying himself - and so, you do too!  Here's a little of the first tune.

I've heard Tim Eriksen, both live and on recordings, over quite a number of years now, and I'm pleased to report that - excursions into other musics notwithstanding - he's lost none of his love of, or skill with, the old songs.  This is a very worthwhile CD, and I'm sure many listeners will like even more of the tracks than I currently do; they are all, without exception, very well worth hearing.  For myself, I continue to look forward to his future recordings of traditional songs and tunes.  Like a good wine, I think he has the potential to mature into something really very good indeed.