Farewell to Old Bedford; Guide Me O Thou Great Jehovah; O Death; Friendship; Sandy Boys; Omie Wise; The Golden Harp; Careless Love; Castle by the Sea; I Wish the Wars Were All Over; Bonny Bay of Biscay; Edward; Jewett (instrumental); Jewett; Every Sound Below; Garden Hymn; Soldier Traveling from the North; Return Again. 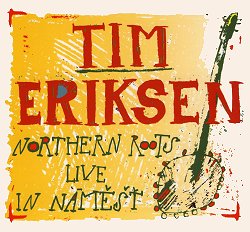 This is a live recording of a performance given as part of the 2008 Folk Holidays Festival in Námĕšť nad Oslavou, Czech Republic.  The sound is excellent, although a substantial room echo is a bit startling at first - but you soon get used to it.

As is so often the case these days, the CD's booklet (half in Czech, half in English) tells us absolutely nothing about the songs or their sources, but uses the space to quote Wikipedia, Time Magazine and the L A Times regarding Sacred Harp and Shape Note music.  It also, briefly, lets Tim discuss his 'Northern Roots' concept.  "Northern Roots is the largely unknown, almost secret music of New England.  When people talk about "American Roots Music" they almost always mean old songs from the South, but there are many wonderful songs from the North as well.  I use the term 'Northern Roots' to make this distinction clear."

Nothing contentious about that - yet it seems odd that Tim Eriksen almost always starts his live gigs with Farewell to Old Bedford - a song from the singing of Lee Monroe Presnell, of Beech Mountain, NC.  How this fits into a 'Northern' concept rather eludes me!  Nonetheless, track 1 is Farewell to Old Bedford again.  This is the high and lonesome sound of 'Appalachian' unaccompanied singing at its most extreme, you might say, and Tim certainly gives it all he's got.  It is, quite definitely, a stunning performance.  If you own a copy of the excellent CD of Anne and Frank Warner's collection, Her Bright Smile Haunts Me Still (Appleseed APR CD 1035), you can make a direct comparison of the two singers.  The immediate thought which springs to my mind is that Lee is some 40 years older than Tim - and that it shows.  He takes the song a little faster and uses a more declamatory style; you detect the passion of the singer as the song progresses.  With Tim's performance (definitely the right word!), you are presented with it, on a plate, from the first line.  However, I don't mind this approach too much - imagining that Lee might just have sung it this way himself as a younger, more energetic, man.

Track 2 is a five and a half minute rendition of Guide Me O Thou Great Jehovah - a bit of a mistake, I think,

since both these first tracks share the same approach, and so sound rather similar.  The programming of the rest of the CD is far better thought out, and makes an engaging listen.  O Death has a fine fiddle accompaniment - though it's basically the same tune as Ralph Stanley uses ... again, not a particularly 'Northern' item.  Next is the lovely Friendship, from Massachusetts, again with fiddle - Ilke this very much (sound clip).  Sandy Boys a fine fiddle solo with vocal addditions follows, then there's a nice version of Omie Wise, and the shape note Golden Harp, both with banjo accompaniment.

Careless Love is accompanied on the guitar, and is followed by The Castle by the Sea "from near where I live" - which turns out to be a nice version of The Outlandish Knight.  Tim's High'n'Lonesome vocal acrobatics notwithstanding, I really do enjoy his more laid-back singing, as displayed to good effect here (sound clip).  He continues in this vein for the next two tracks, I Wish the Wars Were All Over and The Bonny Bay of Biscay-O.  He also moves from guitar to bajo sexto for the latter and for the next track, Edward - very effective.

Next we get an instrumental version of Jewett , very well played on the Jews Harp.  As the following track makes clear, Jewett is the name of the tune used for Amazing Grace in parts of New England.  The CD finished with three old hymns: Every Sound Below; Garden Hymn; and Return Again.  The first is powerfully mournful, the other two "sound a lot like dance music ... fiddle tunes ... banjo tunes" as Tim says in his introduction.  But the penultimate track is Soldier Traveling from the North, which turns out to be a version of The Light Dragoon, very well sung unaccompanied.

This a most enjoyable CD - plenty of light and shade - by a quite extraordinary singer ... he's a very good musician too, and never lets the accompaniment get in the way of the songs.  It's available from www.play.com at only Ł7.95.  Highly recommended.