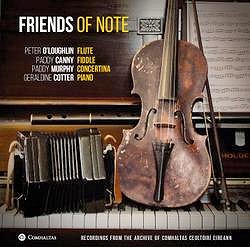 40 years ago, Seamus MacMathuna, then archivist and field recorder for Comhaltas Ceoltoiri Eireann started to record three of County Clare's musical giants with the very young Geraldine Cotter on piano.  Three different venues were used; Comhaltas headquarters in Dublin and the homes of the O'Halloran and Cotter families over three or four years.  Finally the recordings have been published.  At the launch in Ennis Geraldine admitted that she'd expected an LP to be released when the recordings were completed, but things never seemed to fall into place.

The three tune players should need no introduction, having all featured on solo recordings from the nineties onwards.  Peter O'Loughlin only died last year approaching his ninetieth year and he recorded extensively with Maeve Donnelly and Ronan Browne.  The oldest of the three, Paddy Murphy, was born in 1913 and is recognised as a key influence on the many concertina players in Clare today.  His solo playing of Cooley's Hornpipe was copied by Noel Hill on the seminal duet record with Tony Linanne and is now considered the usual setting, even though it diverges in the second part from Paddy O'Brien's written version.

Paddy Canny and Peter O'Loughlin were on the first LP of Irish music and twenty years later the lovely lift and easy playing that were features of that recording are once again evident on this CD in the Canny and O'Loughlin duets.

Geraldine Cotter is now acknowledged as one of the finest piano accompanists around.  Her talent had been noted by the three older men when, about the age of 15, she'd be collected from Ennis and taken to Minogues pub in Tulla and encouraged to vamp on the piano instead of playing the tunes as she had until then.  Occasionally a chord sounds a bit odd, but for somebody barely 20 years old at the time of the recordings, her sympathetic accompaniment always enhances the music.

Paddy Canny's solos are stand out tracks, his rhythm and ornamentation are simply wonderful to listen to and his use of a more natural, 'just tempered' intonation bringing in flattened thirds and sixths gives his music an other-worldly feel.  On top of that, his settings of tunes such as The Lilting Banshee show what character and depth can be got from the simplest of tunes.

Listening to the CD, the music sounds easy and uncluttered, the three men seemingly playing for sheer pleasure.  Yet, repeated listening always throws up another little twist or variant that you hadn't noticed before.  As Seamus MacMathuna says in his introduction, "for them the notes had their value, the phrases had their shapes and the tunes told their own story".  This is music straight from the heart with no airs or contrivance.  There isn't a single track that isn't of the highest standard.

Nickie and Ann McAuliffe have provided extensive background notes on the tunes, there are short reminiscences from Seamus MacMathuna and Geraldine Cotter, an introduction from Ronan Browne who was privileged to know all four musicians, as well as short notes from descendants of the three featured musicians.

All too short at 40 minutes long, this is a must have CD.  It's available for only 10 euros from Cois na h'Abhna https://www.coisnahabhna.ie/shop/product/cd/401/