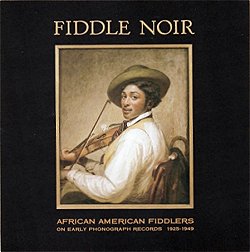 A number of Old Hat's uniformly first-rate CD releases are reviewed on this website: among them, discussed by the late Fred McCormick in 2001, are two anthologies of African American fiddle players, Violin, Sing the Blues for Me and Folks, He Sure Do Pull Some Bow! Fiddle Noir must be intended in part, at least, as a follow-up: its appearance in the modestly-reviving vinyl medium presumably reflects the hope of attracting purchasers within the Venn diagram of audiophiles, nostalgics, and hardcore blues collectors.

The reasons why commercial companies didn't make many recordings of black fiddle music - with the Mississippi Sheiks, as ever, the glaring exception - have been much discussed, and I don't intend to recycle those discussions here.  However, I do think that I should take issue with Fred's argument, in one of his reviews, that the fiddle became uncommon in blues because it was good for making dance music, but 'not very good for grinding out expressions of human degradation', and therefore didn't fit because the record industry 'exemplif[ied] the blues as listening music, rather than dance music, [which] concentrated attention on the blues as expression of social alienation.'

I'm afraid that these arguments seem remarkably ignorant of the content of blues records, and of blues lyrics generally.  As Henry Townsend once remarked, the blues function (sometimes, I'd add) as "a relief of pressure", and while it's undeniable that racism (which I assume is what Fred meant) is one of the sources of psychological pressure, it's far from the only one.  It seems unlikely that many people got dressed up in eager anticipation of an evening of social alienation.  Blues, live and on records, has always been music for both dancing and listening; blues lyrics seem always to have been largely - if far from exclusively - about relationships between men and women; and on this LP, the perfect match between Ollie Griffin's playing and Peg Leg Howell's doleful vocal on Rolling Mill Blues is sufficient to demonstrate that black fiddlers were decidely not confined to pumping out cheerful dance tunes.

On the other hand, Fiddle Noir does begin with a wonderful example of a cheerful dance tune, in the shape of Bill Cheatem.  This was issued in Vocalion's old-time series, marketed to white purchasers, and it's been suggested that the musicians on this record may be white, and unrelated to the bands, led by Tommy Bradley and James Cole, which made a score or so of recordings for Gennett.  Listening to Bill Cheatem, I did wonder, but the musicians who played in the Bradley-Cole outfits were based in Indianapolis, where Vocalion 5226 was recorded, and listening to its flipside, I Got a Gal (which can be heard on Folks, He Sure Do Pull Some Bow!) dispels my doubts.

As well as being exuberant fun, Bill Cheatem is also heard in magnificent sound quality.  This is true of all the tracks on Fiddle Noir; I had my reasons for mentioning audiophiles first when discussing the target audiences above.  Long-term blues collectors will be have heard all the tracks here before, but never with such clarity, depth and presence - except, perhaps in the case of the Memphis Jug Band, which means that the remastering of My Business Ain't Right matches the standards set by the late John R T Davis.  To those who know JRTD's work, this will be a recommendation in itself.  It's hard to believe that Steel String Blues is an acoustic, rather than an electrical recording.  (The uninspired artist credit 'Instrumental Trio' appears on the original 78, incidentally; it conceals fiddler E L Coleman, banjoist Charles Washington, and - plucking and fretting the steel strings in question - slide guitarist Sylvester Weaver.)

Speaking of concealment, it's worth mentioning that 'Walter Jacobs & Carter Brothers', issued in OKeh's hillbilly series, were Walter Vinson and Lonnie Chatmon (the Mississippi Sheiks), plus Lonnie's brother, Bo Carter.  In 1928, two years earlier, OKeh had recorded the white Carter Brothers & Son, also a ferociously hot band, and also from Mississippi.  Only a cynic would wonder whether the company was deliberately sowing confusion among potential customers.

It would be pointless to enumerate the sonic merits of every title, but it's worth emphasising the cut-through of Bill Settles' string bass on Midnight Special; the vibrant depth and richness of Eva Parker's stately singing, and of her anonymous fiddler's playing; and the clarity of the interlacing fiddle and banjo in Taylor's Kentucky Boys, played respectively by Jim Booker (African American) and Marion Underwood (white, like guitarist Willie Young, whose near-inaudibility is Gennett's fault).  'Taylor' was Dennis Taylor, Gennett's talent scout in Kentucky, and the instigator of country music's first racially integrated recording session.  Jim Booker - or perhaps more accurately, his playing - was greatly respected by white musicians in his part of Kentucky, and a number of tunes that he played, but didn't record, can be heard on Traditional Fiddle Music of Kentucky Vol.  2 (Rounder CD 0377).

The enclosed booklet's suggestion that 'Booker's nine issued sides on Gennett captured only the tip of a rich and varied repertoire' is verifiably accurate, therefore.  That's as good a segue as I can manage to the eight-page insert, which is well designed, nicely illustrated, and contains accurate discographical data and short but insightful essays on each track.  Some of the biographical details are new to me, and reflect the recent on-line accessibility of historic newspapers and vital records.  I knew that Hattie Parker was a secular disguise for Eva Parker, of gospel group the Pace Jubilee Singers; but I hadn't been aware that the song's composer, 'Charles Henry' was Charles Henry Pace, composer, publisher, and director of the eponymous Jubilee Singers, also crossing over to the sinful side of the street.

A couple of points to pick up on: as I've noted elsewhere, physical resemblance suggests that 'Lotis Stevenson', pictured holding an alto sax in Will Batts' Novelty Band, is Luddie Stidham, whose son, blues singer/guitarist Arbee Stidham, said that his father played that instrument.  (Presumably Don Kent, who obtained the photo from Batts' widow, Mary, misunderstood her identification of him).  I'm also very sceptical about the suggestion that Bamalong Blues commemorates the Second Alabama Infantry Regiment, a short-lived Confederate unit.  The song's four stanzas are 'connected associatively by themes of escape', to quote myself in Blues & Rhythm 263 (October 2011), and my view is that 'I ain't gonna be in the second 'Bama long' refers to the state of Alabama.  'The second 'Bama' is Jim Baxter's native Georgia, and the implication is that both places are equally bad for African Americans.

I'm conscious that the previous paragraph may be over-specialised for a review of this kind, but it's a response to Old Hat's attention to detail and awareness of historical context.  I can only make the response because the LP exists, and constitutes an immensely enjoyable survey of African American fiddle music as recorded during a decade and a half, 1925 to 1939, of the last century.  Ten years later, the Mobile Strugglers proved that the music was still surviving, but by then the band's name may have accidentally described the extent of that survival.  It doesn't describe the quality of their playing.

The haphazard nature of encounters between African American fiddlers and the record industry means that there must be gaps in the, well, record as a result, but such performances as did find their way onto shellac were often of outstanding quality.  Fiddle Noir documents the surviving traces of a rich heritage which encompassed a remarkable range of styles and approaches to the instrument.