The Best of Flaco Jiménez

This CD contains selections from a number of previously issued recordings by Leonardo 'Flaco' Jiménez, singing and playing the accordion in various line-ups, with guest appearances by Ry Cooder and Peter Rowan.  Running time, 50.29 minutes.  It includes the following tracks:

Anyone who's unfamiliar with the playing of Flaco Jiménez, or who's only heard him guesting with other artists, will find this CD an excellent introduction to the work of a virtuoso musician.  Dedicated fans probably have most of these tracks in their collections already, but even they might consider buying the sampler as a birthday gift for an unconverted friend or relative. 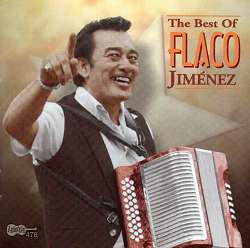 The accompanying booklet provides ample background information about Flaco and his music, and gives parallel Spanish and English texts for all his songs.  What more do you need to know?  Not much, probably - but here are a few facts that may be relevant, and a handful of subjective impressions which you can disagree with after you've heard the record.

The style of music featured on this CD developed in southern Texas and northern Mexico, over the last several decades.  Its distinctive flavour comes from the blending of subtle Latin-American melodies with the solid rhythms brought over by German, Czech and Polish immigrants.  (Imagine a hefty plateful of sausage and dumplings, smothered in hot-and-sweet chilli sauce.)   The lead line is played on accordion, supported by a bajo sexto (a twelve-string guitar, tuned way down), while a string bass - and sometimes a drum-kit - lays down the beat.  Its original function was to soothe the ears, and stimulate the feet, of customers in local cantinas and dance-halls, but now it has a much wider audience.  Flaco himself has made notable contributions to recordings by celebrities like the Rolling Stones, Linda Ronstadt, Emmylou Harris, and in particular, by Ry Cooder.  He's also played a leading role in highly successful cross-over bands like The Texas Tornados and Los Super Seven.  But he can still deliver the goods in the traditional format as well as ever.  So here we have a regional style of music which has gained international exposure, while still remaining rooted in its native culture.  Its success might provide useful lessons for musicians elsewhere.

Flaco's chosen instrument is the three-row diatonic button accordion (or melodeon, if you prefer).  It's usually more noted for volume than for delicacy,

but in his hands it produces an inexhaustible stream of enticing melodic phrases.  Furthermore, his decorations are always appropriate for the theme, and the mood, of the piece they accompany.  In Juarez (sound clip), for example, he takes frequent liberties with the tune, without ever betraying its spirit.  And when accompanying his own (or other artists') singing, he shows sensitivity to the lyrics, as well as to the melody.  Listen to his interplay with Hugo Gonzales on the final verse of Gritenme Piedras Del Campo (Rocks of the Field, Shout at Me).  Hugo sings "En fin, soy en este mundo / como la pluma en al aire / sin rumbo voy por la vida / y de eso tú eres culpable" ("And so, in this world / I'm like a feather in the air /

Wandering aimlessly through life / And you are to blame for this").  Flaco reinforces the troubled image with a wild, whirling flourish, before teeing up the melody so the singer can drive off again.  (sound clip)

Listen to this CD and imagine yourself in a cheerful crowd, gathered in a hall, or a town square, for a birthday party, a wedding reception, or a fiesta.  Everyone is enjoying the music in their own way.  The beat is positive enough for dancing, but not so aggressive that it intrudes on the conversation.  The tunes are always appealing, but never too syrupy.  And the lyrics entice you to listen, without thrusting themselves on your attention.  (Anyhow, they're mostly variations on the familiar theme of loving and losing, so if you can't follow the words, you can still hum along with the malady.) For many years, local bands on both sides of the Texas-Mexico border have earned an honest crust with this kind of music.  But Flaco is a great performer with a capacity (or perhaps a compulsion) to transmute workaday material into something magical.  There are plenty of examples of his alchemy to enjoy here.