Drop on Down in Florida 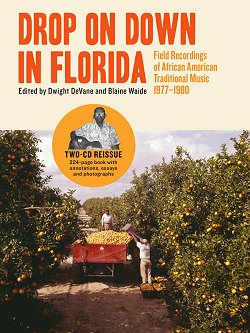 In 1980 I took an evening class at London University.  The course was titled 'History of the American South, 1865 to the present' and the tutor was a visiting professor from Florida.  One thing that I remember was that whenever something of importance happened, the tutor would add, almost as an afterthought, "Nothing happened in Florida".  I mention this because the same could be said when it comes to Florida folk music.  Over the years there has been very little fieldwork carried out in this semi-tropical state.  In 1935 Alan Lomax and Zora Neal Hurston spent some time around Eatonville making recordings for the Library of Congress, and, in 1950, Alton Morris published his book Folksongs of Florida.  One singer recorded by Lomax and Hurston was Gabriel Brown, who later moved to New York to make a living as a blues singer.  Other blues singers associated with Florida include Tampa Red, who was actually born in Georgia but who learnt to play slide guitar in Florida before moving to Chicago in the 1920s.  And for many years it was assumed that the singer and guitarist Blind Blake was from Jacksonville, Florida, although it now seems possible that he was actually from Newport News, Virginia.  However, on one of his recordings Blake used a Gullah/Geechee dialect, which might suggest a connection to the Georgia Sea Islands, rather than to Virginia or Florida!

Luckily, in 1976, the American National Endowment for the Arts appointed Peggy A Bulger as the Florida State 'Folk Arts Coordinator'.  In 1976 Bulger, in association with the Center for Southern Folklore, based in Memphis, acquired a grant from the NEA to conduct the 'North Florida Folklife Project', part of which required a young student, Brenda McCallum, to spend three months seeking out local musicians.  McCallum was helped by another fieldworker, Dwight DeVane, and by her husband Steve McCallum.  Further grants were obtained in 1980 and, in 1981, the Florida Folklife Project issued two LPs of field recordings made by Bulger and DeVane.  These were Drop Down in Florida: Recent Recordings of Afro-American Traditional Music and the material heard on these albums has now been reissued on two Dust-to-Digital CDs.  The new albums also contain extensive additional recordings that had to be omitted from the original LPs because of time limitations.

It is a little hard to say if this package is a book with CDs, or else a set of CDs with a book, because most of the book actually comprises the notes to the material heard on the CDs.  CD1 is devoted to secular music - mainly blues, while CD2 contains sacred recordings.  All in all it is a well-produced and fascinating package, though I do have a couple of minor quibbles.  Firstly the discography at the rear of the book has not been updated and simply comprises a list of now out-of-print LPs, and, secondly, I am disappointed that the song references fail to give page numbers to the books that are shown.  Having said that, I must add that the actual material heard here - as well as the notes - is of the highest quality and is well worth hearing.

For some reason or other I had expected that the singers heard on CD1 would have shown what some people call an 'East Coast' style of singing.  But this is not really the case here and I can detect influences that come from as far away as Mississippi and Texas as well as from East Coast performers such as Blind Boy Fuller or Curley Weaver.  We know that over the years thousands of black people left the South for northern cities, such as Detroit and Chicago, but the following information from Dwight DeVane came as something of a surprise to me and could explain why some of these singers sound the way that they do:

While many African Americans from the northern and western Florida counties (which had been settled earliest) migrated out of the state in the first half of the 20th century, Florida, in contrast to the rest of the South, was the only southern state between 1910 and 1950 that recorded an increase in the black population due to in-migration.  Migrants from Georgia made up the largest group of in-coming African Americans, followed by Alabama, and then by South Carolina, North Carolina and Mississippi.

In fact, it was this very reason that Zora Neal Hurston chose Florida for much of her own fieldwork:

Florida is a place that draws negroes from every southern state …  So I knew that it was possible … to get a cross section of the Negro South in one state …  If Florida lore is richer it is because the lore and lushness of other states and countries have been heaped upon Florida by her great attraction for workers.

In fact, one of the most interesting singers heard here, Moses 'Doorman' Williams was originally from the area around Itta Bena in Mississippi.  Here blues authority David Evans gives us an extended portrait of Williams, together with details about his use of the 'one-stringed guitar' (really a zither) that he used to accompany his singing.

1  It comes as no surprise to hear a number of Mississippi blues, such as Rolling and Tumbling and Catfish Blues, in the selection that Williams sings.  I am especially taken by his Which Way Did My Baby Go?, with its rhythmic banging beneath the rather rusty sounding zither.  Overall it is quite amazing.  It should be added that these are not necessarily slavish copies of earlier recordings.  Emmett Murray's version of I'm Gonna Dig Myself a Hole was first recorded in 1951 by Arthur 'Big Boy' Crudup and referred to the Korean War, while Emmett's version has updated lines that refer to the Russian invasion of Afghanistan.  Emmett was another 'in-migrator', this time from Georgia, and would have been in his late 20s when he arrived in Florida.  Like a number of other black singers, Emmett apparently liked to also perform Jimmy Rodgers' songs, such as Waiting for a Train and T for Texas.

I find two tracks to be especially interesting.  Both are titled Polk County Blues, the first performed by Ella Mae (Williams) Wilson & Richard Williams, the second by Willie Gillard, who was originally from South Carolina.  Polk County Blues is a localized blues song that seems to have once been well known in the area.  Known for the stability of its identifying verse (You don't know Polk County like I do/For the reason I know it, well, I roamed it through and through or else Nobody knows Polk County like I do/Say, the reason I know it, I done walked it through and through) it seems that singers would then add whatever verses they liked, so much so that the two versions given here are almost separate songs, apart from the common opening verse, that is.  Throughout the history of the blues, singers have always felt free to add whatever lines seemed necessary to their songs and, like the Appalachian singers, employed any number of floating verses as well.  Ella Mae Wilson, also gives us a pretty standard version of the song Careless Love, while her father, Richard Wilson, gives us a more personalized version of the song, which he calls Tain't But the One Thing That Grieves My Mind.  This latter version is sung in a far freer style and shows just how songs can differ, even within a single family, or a single generation.  I really like Richard Williams' style.  At times has guitar playing reminds me of the music of Mississippi bluesman Robert Wilkins.  Williams had a gentle style of singing - listen to him singing Old Forty for example - and I am sure that his neighbours just loved to hear him sing.

Richard and Ella Mae Williams, together with Richard's wife Lillie B Williams, can also be heard singing on CD2 which, as I said before, comprises sacred recordings.  Most of this CD is taken up with recordings made of church groups, although we do also hear guitar-playing singer Johnny Brown working his way through a number of well-known gospel pieces, such as Precious Lord, Take My Hand, Will the Circle Be Unbroken and He Got the Whole World in His Hands.  Brown, who was blind from birth, was originally from Alabama.  He spent his life travelling across the South singing on street corners and, according to the notes, he was equally adept at singing secular blues and folksongs.  Sadly, there are no examples of such pieces included here.

The group-singing recordings were made at two churches, Testerina Primitive Baptist Church and Miccosukee Church of God of Prophecy, and at two singing conventions, the Florida-Alabama Progressive Seven-Shape-Note Singing Convention and the Southeast Alabama and Florida Union Sacred Harp Singing Convention.  The churches and their congregations certainly impressed the collectors:

At the Miccosukee Church of God of Prophecy and Testerina Primitive Baptist Church, we listened raptly to soul-stirring preaching done in the old-style chanted tradition, and witnessed the 'Spirit of the Lord' enter churches and cause members to 'fall out' in ecstatic prayer.

Hmm … not quite your regular C of E then.  Actually, these are stunningly powerful tracks, ones which can even move a non-believer such as myself.  And the same can be said for the Convention singing.  I am not an expert on American religious music.  Years ago I read George Pullen Jackson's White Spirituals in the Southern Uplands and I have to say that I thought that shape-note singing was only used in white communities.  Clearly this is not the case.  Doris J Dyen adds the following pertinent note to these recordings.

As I considered how to describe the songs being added to Drop on Down in Florida, I thought again about cross-influence between traditions, both synchronic (cross-influences occurring at one moment in time) and diachronic (those occurring over time).  In the 1930s George Pullen Jackson had called attention to a synchronic connection between songs printed in The Sacred Harp and other four-shape-note tunebooks before the Civil War (he used the term 'white spirituals') and pre-Civil war songs from African American oral tradition as documented in Slave Songs of the United States.  In my own research, I too had focused mainly on cross-influences between the white and African American traditions.  But hearing these shape-note recordings again, several decades removed from fieldwork, prompted me to think about possible synchronic and diachronic cross-influences within African American tradition.  I am now struck by the high correlation between some of the 20th century African American shape-note singer's favorite (sic) Sacred Harp pieces and orally transmitted songs known to have been in circulation among African Americans in the same region during the 19th century.

Over the years we have come to expect something special from Dust-to-Digital.  With Drop on Down in Florida: Field Recordings of African American Traditional Music 1977-1980 they have again set the standard that others have to follow.  It is a great set, one that I will be dipping into for a long while to come.