This CD is in the Demon/Edsel 'Blues Vault' series, which announces itself as previously unreleased.  That the recordings on it were made by Adelphi Records in 1972 suggests that they, or some of them, are those released on LP (presumably in America only) by Adelphi in 1976.  Whether that is the case or not, this seems to be the first British release of an album by Frank Floyd.  My own previous experience of him was restricted to three tracks included, rather apologetically, in the second volume of Chess Records 'Genesis' boxed set.  Those 1951 recordings struck me then as little more than the curios they were presented as.

Floyd was one of those artists who fell foul of American musical apartheid, which entailed an insistence on knowing the race of any performer.  Record companies could easily find themselves accused of sowing dangerous (i.e. commercially damaging) confusion, by not making clear enough the race of their artists. 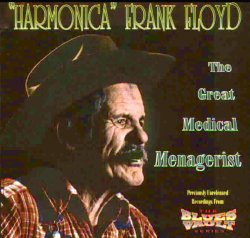 The Allen Brothers went so far as to sue Columbia for releasing one of their records in the company's 'race' series.  As it happens, Floyd was part Cherokee; but, unlike Charlie Patton or Leadbelly, for instance, 'the rest' of him was white - and that, let's face it, is what really matters.  That genetic indiscretion accounts for Floyd's status as a mild embarrassment in the Chess catalogue.  It also justifies any current interest in him, now that the productive interaction between black & white musicians is finally acknowledged, and not automatically dismissed as either selling out or theft.

Floyd's other problem in the '50s was his archaic style.  Some critics, apparently, recognised that his music was 'a good blend of black & white styles', but lamented that the styles in question were those of the '20s rather than the '50s.  It's hardly surprising, then, that he did rather better as a 'blues rediscovery' in the early '70s, performing alongside black bluesmen of the same vintage.  He toured as the only white member of The Memphis Blues Caravan.  He had the advantage, then, of course, of having persistently failed in his efforts to become a recording star.  He couldn't be accused of profiting by the influence of his black neighbours: not only had he been born (like Elvis Presley & others) into similar circumstances; he'd stayed there.

Floyd's biography is not only typical of bluesmen, but also, in some ways, an extreme example.  His unmarried parents having separated in his infancy, he was cared for by semi-itinerant sharecropping grandparents, until his grandmother died, and his grandfather, who was a fiddler, took him on the road.  One night in 1922, his grandfather died suddenly, leaving Frank adrift & rootless at the age of fourteen.

Apart from the occasional stint at farming or other settled work, Floyd spent most of the rest of his life as a travelling entertainer.  Much of his youth was spent with carnivals and medicine shows, as labourer, clown & musician.  His circus skills are said to have included fire-eating, hypnotism and make-up artistry.  He performed as a bogus Hawaiian, and specialised in nonsense talk and farmyard noises.  Having played harmonica since childhood, he took up guitar under the influence of Jimmie Rodgers' first records (an influence which is not conspicuously evident in this album except in the inclusion of Blue Yodels no.'s 6 & 7).  Floyd's distinguishing gimmick was playing guitar & harmonica simultaneously, without a rack - he held the harp in his mouth like a cigar, and sang out of the other side of his mouth.

This background as an all-round entertainer shows in these recordings.  My own immediate reaction to this album was that here was an undoubtedly impressive stage performer who was worth recording for historical purposes, but who hardly warranted a commercial release.  It has grown on me somewhat, with repeated listening, but I'd still hesitate to recommend it to anyone not expressly interested in the peculiar branch of cultural history it represents.  It's heavy on dated humour, cynical hilarity and cartoon voices, and correspondingly light, it seems to me, on genuine musical interest.  However, the June issue of Folk Roots included an enthusiastic review of this CD.  Even the track 'Shampoo' was described as 'hilariously obscene', so I was apparently mistaken in supposing that only rugby players were likely to find it amusing.  Lucille Bogan's alternative take of 'Shave 'Em Dry' is 'hilariously obscene', if you like; Frank Floyd's 'Shampoo' is viciously misogynous doggerel.  (Unfortunately, it's also quite catchy, when you've heard it a dozen times).

A more puzzling oddity is the song 'Movement Like an Elgin'.  If I've been wrong, all these years, in assuming that 'elgin' was a dialect rendering of 'elegant', I hope someone will let me know.  Otherwise, I'm bound to wonder what on earth Frank Floyd imagined 'an Elgin' (which he pronounced 'Eljun') to be.

(Before anyone else writes in - we've had quite a number of letters for David, illuminating the matter of Elgin movements and their associated imagery ...  Thanks to all! - Ed.)