And This is Free

The Life and Times of Chicago's legendary Maxwell Street 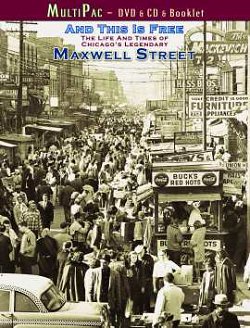 Imagine, if you will, Brick Lane in London's East End.  Imagine being carried along with the Sunday morning crowd past stalls of second hand clothing, of rusting auto parts, of piles of spineless books and boxes of used false teeth (I kid you not).  Now add a man playing a tuneless melodeon, a rooster sitting crazily on top of his head, or a blind man knocking out a version of John Henry, his fingers running along the strings of a broken down National guitar.  Look over to the left and you will see a band of suited, crew-cut white evangelists, turn right and a group of black musicians and dancers will be singing and dancing as though possessed by the Devil himself.  This was Chicago's notorious Maxwell Street market, a haven for tricksters, conmen, peddlers of Hoodoo magic and, God knows, what else.  But, to many, it was the place to go to see and hear some of the great blues musicians of the early 1960s.  Record collector George Paulas was only 13 years old when he and a friend first took a bus to visit Maxwell for the first time.

As we turned a corner we heard music - loud, wailing, electric guitar music.  We didn't even speak.  We looked at one another and let the magnet force draw us to the point of origin.  The band consisted of 3 black guys.  The leader on harp and vocals, a guy dressed in khaki pants and shirt work clothes and an ancient old black guy on drums smoking a cigar.  There was a good sized mixed crowd.  The band leader announced he was Big John Wrencher; handling vocals and harp, Little Buddy on guitar; and Playboy Vinson on drums.  Special requests taken, 'We gonna play a little blues for ya this morning.  Aw-right Now … Here's one by Howlin' Wolf' … Wrencher began his dance and played to the crowd.  Wringing, twisting and howling the song…'I'm goin' upstairs gonna bring down all my clothes … yeah' … harp, guitar and vocal all came from one giant fender amp that was plugged in through a window in the dirt back yard of a 3 story red brick apartment building.  We watched in amazement as pints of whiskey were passed among the band between songs.  People danced in the dirt and shouted with glee.  Women danced suggestively and the men answered back with every limb.  If Martians landed a block away we wouldn't have noticed.

In 1964 film-maker Mike Shea visited Maxwell Street on a number of Sundays.  He ended up with over 20 hours of film, which he finally edited down to a 50 minute gem of cinema-verité, And This is Free.  Over the years the film achieved cult status and, now that it is available on DVD, it is easy to see why.  To start with, it is a multi- layered film, with a format that is reminiscent of the MacColl & Parker radio ballads.  There is no narration.  Instead we get the traders talking as the camera roves to and fro.  We follow the flow, stopping here and there to watch and listen, just as we do in 'real' life, because this film is also a slice of reality.  And, all the time, we get the music weaving in and out, adding colour to the film's raw texture.  You don't have to be a blues fan to enjoy this film.  You just have to be human.

Shanachie's And This is Free is not just a copy of Mike Shea's film.  It is a well thought out package that tells the story of Maxwell in its entirety.  As well as the Shea film we get a 30 minute film Maxwell Street: A Living Memory, a reminiscence of Jewish memories; Maxwell Street Portrait, a photo-show of historical pictures; early archive footage of Casey Jones, the Chicken Man, and musicians Daddy Stovepipe and Arvella Gray.  And, as a bonus, an interview with Gordon Quinn, who worked as Mike Shea's sound recordist for And This is Free.

Then there is the CD comprising seventeen unrivalled tracks that in some way can be linked to Maxwell.  There are a handful of early recordings from the '20s and '30s (John Henry Barbee's Against My Will, Blind Percy & His Blind Band's Fourteenth St Blues, Robert Nighthawk's Prowling Night Hawk, Daddy Stovepipe & Mississippi Sarah singing The Spasm and Papa Charlie Jackson's Maxwell Street Blues.) Then there are the groundbreaking tracks from the late '40s/early '50s when people like Muddy Waters, Little Walter and Howlin' Wolf were changing American music for ever.  When we consider that many of these recordings were made by little known companies, whose sound quality was not known for its fidelity, then this CD will come as something of a surprise.  I have listened to these recordings for decades and I can honestly say that the sound here is quite the best that I have ever heard.  All praise then to Richard Nevins who was responsible for the remastering.  Most, if not all, of these latter recordings have been reissued many times before, but somehow, hearing them together like this, it is as though I am hearing them for the first time.

Some of these tracks can be linked directly to the early delta musicians.  Dark Road is Floyd Jones' c.1952 remake of the Tommy Johnson classic Big Road Blues and comes complete with Johnson's eerie falsetto.  Baby face Leroy's Trio (with Muddy Waters and Little Walter) give us a two-part Rollin' and Tumblin' that “take Garfield Akers, (Charlie) Patton and (Son) House and electrify their souls”.  In fact, all the tracks heard here are stunning; from J.B.Hutto's opening Pet Cream Man to the Jimmy Rogers & Little Walter Little Store Blues track.

Finally, the package also comes with a 36 page booklet chock full of information and pictures.  Please, do not miss up the chance to see and hear all that is contained within this multipack - get it from www.shanachie.com   Although I may have emphasised the blues content, I can only repeat that there is far more to this set than the music.  It is a piece of history, a set of unrivalled documents that present an era that is now gone and past.  Above all, though, sit back and enjoy!