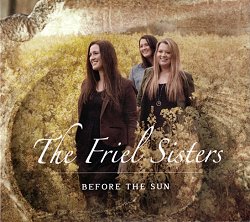 The Friel sisters, Clare, Sheila and Anna, were born and raised in Glasgow with family links to County Donegal.  This is their second CD of songs and Irish dance music on flute, fiddle and uilleann pipes.  They are accompanied by Hajime Takahashi on guitars and Cathal O'Currain on bouzouki.  The music and songs are all carefully arranged to provide opportunities for each of the girls to showcase their undoubted talents, through solos, duets in various combinations, including a flute duet, and the full trio.

Given the combination of instruments, a comparison with the Bothy Band sound is almost inevitable and the first track, with its opening guitar chords and bouzouki rhythms, sets up that comparison.  Ensemble playing from the trio bursts in at, to this reviewer at least, a ferocious speed which sadly removes much of the subtlety of the first tune Young Tom Ennis reducing it to its bare bones.  A Donegal tune follows featuring the fiddle, then pipes start the third tune, and fiddle and flute return as the last tune hits its stride.  By the end of the track, the full force of the group leaves the tunes beaten and battered behind a wall of sound which may not be helped by the generous use of reverb in the mix.

While excitement is undeniably generated through speed in Irish music, the soul and essence of the music is infinitely richer when the tunes are given room to breathe.  Playing at speed imposes a discipline on the players that does not allow much deviation from an agreed setting, otherwise the notes just become a blur.  The way the music has been mixed, it sounds as if the players are at the back end of a hall and the mics are at the other, and the amount of echo generated obliterates any sense of clarity and coherence in the playing.

The songs are much better paced and provide a very pleasing selection of Ulster and family sourced songs, running from the fairly common A Stor a Stor a Ghra and Free and Easy sung į capella by the three women in unison, to an unusual sung version of Easter Snow, an air heavily associated with Seamus Ennis and a favourite among pipers, sung appropriately enough by piper Sheila.  As with the tunes, though, whether through over production or poor sound recording, the resulting sound quality detracts from the overall effect.

This CD is made by professional musicians and aimed at a commercial audience; unfortunately whatever skills and creativity are on display are badly let down by the overall sound quality.  There are informative and conversational notes on each tune and song as well as endorsements from such luminaries as Tommy Peoples and Maighread and Triona Ni Dhomnaill.  No information is available at the moment on distribution, but if a modern take on traditional music is your taste, expect to find it on Custy's and the Claddagh websites soon.