Gypsy Music from the city of Bucharest

Many of you will have become familiar with Balkan Gypsy music through the excellent films of Emir Kusturica - Time of the Gypsies, Underground, Black Cat White Cat. 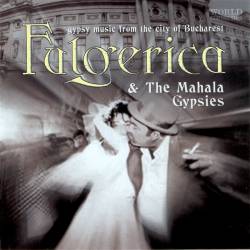 Less-widely seen, sadder, more emotionally involving and - from this magazine's perspective - more musically interesting, was Tony Gatlif's Gadjo Dilo (1997), in which Constantin Fulgerica and his band appeared.  Gatlif has made at least one other film about Gypsies and their music, Lachto Drom (1993), but it appears to be very difficult to find in the UK.  Perhaps the closest comparison with the subjects of this present CD might be made with Taraf de Haidouks who appeared at this year's Cambridge Festival, and elsewhere - to considerable acclaim.

As the record's subtitles makes plain, Constantin Fulgerica plays Gypsy music from Bucharest, Romania's capital city.  The booklet notes, by Garth Cartwright, tell us very little more than that - consisting, for the most part, of Fulgerica's supposed reverie about his city; shattered by two world wars and the ravages of Ceausescu's 'modernisation'.  We learn nothing at all about the music or its function in the society - although it is indicated that this is not just the repertoire they play in restaurants.  Most of the 15 tracks are traditional, together with a couple of Fulgerica's own compositions and one from Mircea Bogdan, Mahala's fiddler.

Constantin Fulgerica plays piano-accordion, and the Mahala Gypsies (the word means neighbourhood or barrio) comprise the aforementioned Mircea Bogdan (fiddle and vocals), George Miu (cymbalom) and Florin Dobrica (double bass).  In addition, the producer, Dragi Sestic, conscripted the services of singers Cristina Turcu and Dan Armeanca, plus a number of other musicians adding clarinet, guitar, sax, drums and various percussion.  The track personnel listings range from three to nine, with five being the most common number.

All the playing is, as may be imagined with a record of this sort, superb.  Although Fulgerica plays on every track, it's often difficult to judge just how good a payer he is (the notes imply 'the best in the world') since the ensemble work is so tight and the arrangements so intricate that it's hard to truly decide exactly who's doing what.  However, where the track data make his contributions obvious (and he's not sounding like the clarinet), it's pretty clear that 'best in the world' isn't just hype.

Personally, I find the CD just a little too much for prolonged listening - quite a lot of it is too frenetic, too dramatic, too emotional to be able to take in large lumps.  However, it's well programmed, and there's a good deal of light and shade in the mixture.  If you enjoy this sort of thing, I'm pretty sure you'll love this CD.

I can't immediately think of anything similar I've heard which is better.  To give you an idea - here's a short clip from track 1 - Briu de la Craiova played just on accordion, cymbalom and bass.