It's musically economical that the two main functions of the march are to send soldiers off to war, and to accompany bodies to the cemetery.  It's also a commonplace of psychology that sex and death are intertwined.  Since German-speaking Europe produced both Sigmund Freud's theory of the death wish, and Wagner's Liebestod, it seems appropriate that it should also be the source of this compilation by self-confessed Trauermarsch-Fetischisten Fritz Ostermayer. 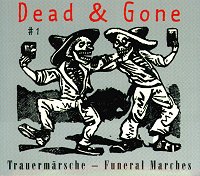 My German is next to non-existent, and the notes are not translated, so I can't give much account of the ideas behind the selection, but among them seem to be a celebration of the eroticism of mortality, which perhaps owes more to Fellini than Freud, and the notion that we affirm life by confronting death.

That, of course, is why the New Orleans marching bands, play Didn't He Ramble? on the way back from the cemetery as the second liners strut their stuff.  Inevitably, New Orleans is generously represented here, with tracks from the Tuxedo, Eureka, Olympia and Tremé Bands.  The CD closes with an attempt at the kind of closure supplied by Didn't He Ramble? as Tom Waits intones Anywhere I Lay My Head, followed by a Dixieland-ish ride-out; Waits' horrible, parodic, pseudo-soul vocalising is, at least, a lesson in the importance of not camping it up.  Even more so is West Lawn Dirge/Just A Closer Walk With Thee by "Buck Funk & Reverend Anthony W Reves" (Lol Coxhill and Steve Beresford), on which unsuccessful pastiche is rendered all the more so by an overlaid "78 hiss" that's not even in the right frequency range.  Other tracks where attempts at ironic distancing don't work are Robert Wyatt's version of Charlie Haden's Song For Che, which may be the world's first example of elevator funeral music; the Willem Breuer Collective grinding Grieg's Death of Åse through Hans Eisler's dreary, social realist mill; and Mike Westbrook's version of Free As A Bird from Cortege, which tries and fails to blend New Orleans with free jazz.

Such a blend can succeed; it does so brilliantly on Albert Ayler's

Our Prayer (composed by, and featuring his trumpeter brother Donald).  This sound clip shows clearly how Ayler blends hymn-like melody with extreme harmonic dissonance - and an imitation of a mourner's shrieks - to produce what is well described in the notes as "avant-garde folk music."  It is unsurprising that the melodies of funeral marches are often similar to - or actually are - hymns, nor that the accompanying harmonies are often triadic block chords; but the interval of a sigh is a minor second, and chromaticism often plays an important role.  Consider, for instance,

the clarinettist of the Tuxedo Brass Band, getting a shawm-like wail out of his instrument as he runs through some Middle Eastern-sounding microtones on Nearer My God To Thee (sound clip).  Also highly chromatic are the chords played by a brass band from Ghana, who are joined by village drummers.  The drums are mostly under-recorded, but this is still a very strange take on an Anglican hymn; it's as if it were being played by a brass band on an English village green - but a green landscaped by Hieronymus Bosch.

More riotously solemn, or solemnly riotous, dissonances are supplied by a Serbian brass band, and by a Good Friday procession from Palermo, Sicily.  However, for anyone whose cultural norm is the comparative restraint of Christian funeral music of the sort played by the two saxes and euphonium of Jopie Vrieze's Klein Bazuin from Suriname,

the most strange, astonishing and dislocating track will be the Trauer-Sturmmarsch of a Saigon funeral orchestra - five minutes of powerhouse South-east Asian funk, thunderously defying the man with the scythe (sound clip).  In total contrast, the Central Band of the R.A.F.'s playing of Chopin's famous Marche Funèbre stands as a textbook example of what European culture means by mournful music: rich, bass-heavy and vibrato-laden chords,

played in that dragging tempo that somehow almost swings, as anyone who has slow marched to music - I was an air cadet as a teenager - will know (sound clip).  These two tracks are perhaps at the extremes of music's responses in march tempo to death and burial.

The culture that most successfully accepts that the only way not to die is never to have lived, and affirms the value of life by a relaxed awareness that

"when the Lord gets ready, you got to move," may be that of Mexico, represented on this disc by the Banda de Tontontepec playing Tres Marias (sound clip).  The CD booklet is illustrated with the wonderful calaveras of José Guadalupe Posada, in which skeletons take part in the joys, the routines, and the tribulations - including funerals! - of everyday life.  Their dancing is not a danse macabre, just the kind that we all do, usually forgetting that we are bones cloaked in flesh.  "'T'ain't no sin to take off your skin, and dance around in your bones," but the hard part is that you can't put your skin back on again.

This is a patchy CD, but at its best - when it's not trying to be ironic or camp - it provides some outstanding examples of how the world's cultures, and their musicians, have come to terms with, and intermittently triumphed over, the certainty that one day the music will stop.

All the Trikont catalogue, and many other worthwhile recordings, are available from Klang Distribution, Clonan House, Midgehole Road, Hebden Bridge, HX7 7AA, UK.