There's no question that Gordon Hall was a phenomenon - anyone who ever spent any time with him will attest to his larger-than-life personality, his strongly held views on any number of issues, his astonishing learning on a wide range of subjects, his charisma, his generosity, his powerful presence ...

All this, and more, explains why so many people loved him and why so many friends worked together to produce this memorial CD.  What it doesn't explain is why so few people seem to actually have liked his singing, or to have bought his only previous published recording (Veteran VT115 In Horsham Town: Songs from a Sussex singing family).

There is the obvious difficulty of producing a record of someone whose live performance was so overwhelming - or, at least, one which is amenable to repeated playing in the quiet of your own home.  However, I think the Veteran tape does as well as most in this respect - and it must be said that the final three live tracks on the present CD are an absolute delight.  But this doesn't account for the comparatively few gigs he was offered in folk clubs, nor the relatively small audiences who sometimes attended them.  My own feeling is that Gordon presented listeners with a problem which they were unable to resolve, and which made them uncomfortable in the presence of his repertoire and his style, while at the same time feeling positive towards the man himself.

The 'problem' was that his singing style was utterly unselfconscious - making no compromises with what he might easily have discerned of the audience's tastes and requirements.  Yet, at the same time, he was clearly completely aware of the extent to which he was constructing many of his songs to suit his own requirements and tastes.  He was: a traditional singer and a revivalist; an academic and a primitive; both within and outwith his audiences' culture, experience and expectations; simultaneously self-conscious and unselfconscious.  In short, he was so aggressively his own man, with all the contradictions which that implied, that we were rather at a loss as to how to respond.

The 'modern' response to this would be to blame the audiences who found him difficult.  And while there's much to favour this response, I don't think it's altogether appropriate here, since Gordon was so much a modern man and so aware of the world and its ways.  It should also be remembered that he did, sometimes, actively seek an audience within the revival.  I think he knew that he was difficult (and why) - and revelled in it to an extent - while at the same time half-believing that what he did was perfectly kosher and ought not to be a problem for anyone. 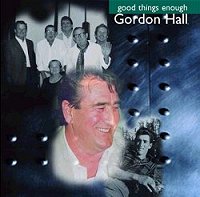 Nonetheless - he's now dead, and we are the ones left to come to terms with his singing.  How does an MT reviewer respond to this CD?  The easy bit first - the package is first rate.  Jon Dudley has produced a handsome booklet, there are good photos and generally good, though not excellent, notes - including idiosyncratic punctuation and appalling proofreading!  Given the problems of recording someone with Gordon's dynamic range (and unsupervised recordings for the most part) the sound quality is quite good enough - perhaps better than might have been expected.  Jim Ward and everyone else involved in the production are to be congratulated.

Given the circumstances, we are lucky to have a good selection of songs, long and short, in a number of styles, on a variety of subjects.  The track list runs: Cecilia; The Plains of Waterloo; Where there's a Will there's a Way; The Week Before Easter; ; The Babes in the Wood; Lord Randal; A Dream of Napoleon; The Constant Lovers; Oh, Dear What can the Matter Be?; The Farmer's Boy.  Few, I think, have been available before.

The songs, then.  Starting at what might easily be termed the 'shallow end', Why Cats don't Wash their Faces before Eating is a charming little piece of nonsense along the lines of Aesop's fables.  Where there's a Will there's a Way provides the title of this CD and has probably been much-heard, as it was one of Gordon's favourites - a parlour song, gently preaching the good old fashioned values which Victorians loved to espouse ... and largely failed to live up to. Babes in the Wood is a fairly standard Sussex version.  Lovers of Ron Spicer's delightful Forsaken Mermaid are likely to find Gordon's treatment of the same song (as The Constant Lovers) quite distressing - until they realise it's a parody, that is!  The last two tracks are also parodies, a local Oh, Dear What can the Matter Be? and one of Gordon's own, of the ubiquitous Farmer's Boy, followed by a Farmer's Toast in which even John Howson gets a mention.

Then there are the big songs - some very big ... The Plains of Waterloo is twelve and a half minutes!  Mabs' song Cecilia (a version of the Female Highwayman) is very well sung, as is The Week Before Easter - although I question the wisdom of cramming in every verse known to man to produce a ten and a quarter minute epic ... when you're aware of the full story by verse four.  A Dream of Napoleon and Lord Randal are really excellent; the latter bears a truly fine version of the tune.  Perhaps this is the sort of ballad which Gordon sang best; where the story is well-known, and slight, so that his relishing of the melody and the performance don't impede your enjoyment of the song as a whole.  Far less successful, for this listener, is his treatment of The Plains of Waterloo. This is a long and complex story - Gordon's researches have produced a composite which starts two days earlier, refers back to battles of three years before and seems to mention almost all of the important participants.  It needs to be told, not performed!  His habit of breaking every amenable word into two, three or even more syllables does nothing at all for the comprehensibility of the narrative, and by the time you've sat through the 14 or more syllables he sometimes manages to cram into "the plains of Waterloo" - the ultimate phrase of each verse - you've pretty well forgotten what happened in the previous one.

So what about the singing style?  From what little we know of his mother, Mabs Hall's singing, we can't see a great deal of her stylistic influence beyond a general north Sussex approach.  Both singers had a bit to do with Travellers in their time and there are certainly elements of Gipsy pub-singing to be heard in Gordon's performance.  I also think I can hear a good deal of Brick Harber (see Just Another Saturday Night MTCD309-10) in Gordon's style - unsurprising, in that they were quite near neighbours, and I can't believe that he hadn't at some time heard, and been greatly impressed by, the older man.

The most obvious - some would say unacceptable - trait is that emphatic kick at the end of every line ... turning the final word into word-ah!  This is, of course, a well-known device much used by both London and Traveller singers (Gordon lived the first 8 years of his life in south London) - but never, in my experience, so insistently or unremittingly as he does.  Did anyone ever pluck up the courage to ask him why he did it?  It would, I think, have been a legitimate, if difficult-to-ask, question.  Personally, I have to accept it as part of 'what he did' ... and it is possible to just tune it out of your consciousness after a couple of minutes.  It is also, perhaps, illuminating that he uses it far less frequently and emphatically in the final three tracks - which were recorded before live audiences.

Regarding the more general manner of delivery, I think Mike Yates has it right when he says in his part of the booklet notes 'Here was a singer who did not merely sing his songs.  Instead, we may say that Gordon actually lived his songs!'  And while this may not be what we are used to in this day and age, I don't think any of us will be the poorer for getting used to it!  Certainly, the more I hear of the real traditional singers whose performances are so much more widely available these days, the less unusual do I find Gordon Hall in this respect.

So - a CD which should be bought by everyone with an interest in English traditional singing, even if you find it difficult listening to begin with.  I am certain that most purchasers will find more and more to enjoy as the years pass ... the reverse of the case with so many records!  An added bonus will be the countless extra verses you can add to your own versions of these songs, should the fancy take you.  And, of course, there's the added pleasure of knowing that the profits from sales all go to various cancer charities.  It's a fine memorial to an outstanding singer, and also a bit of a challenge - what more do you want?  Buy it.