Women of a Certain Age
Songs from the American Tradition 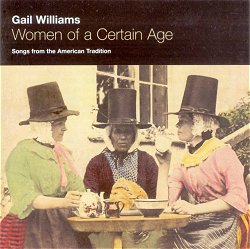 I was somewhat worried about trying to review this CD - American traditional songs by a Britsh revival singer, who is also a friend ...  But it turns out to be very easy - I like it!

Gail, originally from Wrexham, has lived in North London for most of her adult life, and has been singing and playing American music for a similar period - so she knows what she's doing.  She has that valuable knack of singing without any appreciable American accent, yet her songs still sound like American songs!  And you can see from the tracklist above that she's chosen some pretty good material to sing.

It's also nice to find that around half of the songs are unaccompanied - and you won't be surprised to hear that these are the ones I like best.  Gail is a good 5-string banjo player, and accompanies herself on track 10, Dan Tate's Old True Love - not much more than a collection of floating verses, but a thoroughly delightful one.  For the remainder, she's accompanied, on banjo or guitar by partner, Jim Younger.

I've said before that the Americans (or the best of them) have found out how to sing accompanied without it getting in the way of the song.  This is also true here - in most cases - but it's a pity (I think) that the record starts with a great song - Jackie Monroe - where the singing is mercilessly tied to the accompaniment.  And I don't think this is Jim's fault.  Elsewhere, things are much more relaxed - although Texas Gladden's wonderful One Morning in May (here titled The Bad Girl) is also very rhythmically straight-jacketed ... and that's an unaccompanied song!

Two things puzzle me: the first is the inclusion of Our Captain Cried All Hands, learned from Shirley Collins - and to a tune written by Shirley, apparently.  Roud has 25 versions in his Index, and almost all are English.  Since I don't have any of her records, I don't know if Shirley's is an American version but, as sung here, it sounds and feels quite different to the rest of the record.  The other puzzle is the CD's title; I don't know if 'Women of a Certain Age' has a special resonance for Gail which is different from the generally accepted one, but I can't quite see its applicability to this selection of songs.

The CD's cover picture is extraordinary - taken from the American Photography Museum, it is titled Welsh Peasants c.1870 !  Rossendale Records are contactable at: rossrecs@talk21.com  and the CDs are doubtless available from Gail herself at: gail3484@aol.com