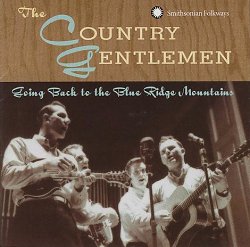 The notes in the booklet and on the inlay card credit the Country Gentlemen with being the progenitors of ‘modern bluegrass’, as a result of their various advances within the idiom. These are outlined here, and it’s interesting to note that two of the most significant were a more jazz-orientated approach to instrumental soloing (improvising – as the bebop players did – on a song’s chord changes, rather than on its melody) and a deliberate reaching back to an older repertoire (they were one of the first bluegrass groups to research older material to perform, in the archives of the Library Of Congress). What’s interesting is that with these two innovations, you have an appetite for taking the music forward, balanced with a practical understanding of what might be gained from delving deeper into its roots. This vigorous mixing of old and new is a factor that has always been vital to the development of this music - Bill Monroe was doing it right from the start - which is why I’ve always had a problem with those who insist of purity in bluegrass; it somehow seems to be missing the point.

Having said that, I do have some problems with this collection, recorded live in concert, and featuring what is decribed as the Gentlemen’s ‘classic’ lineup: Charlie Waller (guitar); John Duffey (mandolin); Eddie Adcock (banjo) and Tom Gray (bass); they all sang. My reservations are not to do with any more ‘modern’ characteristics, but because of a rather frenetic approach almost all the way through - you can hear it first on the song Going To The Races, and even more so on the instrumental Billy On The Low Ground, when you sometimes think that the whole performance is going to run away from them. It never does, which is no doubt a tribute to their individual technical capabilities - which were undoubtedly very considerable - and the tightness of their ensemble playing, but in the end I find it uncomfortable rather than impressive. Even on their sacred quartet arrangement of Hank Williams’ I Saw the Light, they seem determined to get through the song as fast as possible. There’s a more measured approach to Brown Mountain Light, one of the more modern songs included, and to the Blue Sky Boys’ Don’t this Road Look Rough and Rocky, making these probably my favourite tracks.

Jon Hartley Fox’s booklet notes speculate on the possibilty that these recordings date from 1964 (long before the album’s original release in 1973), citing as evidence some of the group’s chat, including the quip that they are ‘better known as the Beatles of the stone age’, but given the stony silence with which this is greeted by the audience, I’m not so sure: either many of them hadn’t yet heard of the Beatles, or they were already fed up with Beatle jokes. It’s also unclear whether many of the audience get the joke in Tom Dooley #2, a satire of Northern folk revival groups, with plonking instrumental breaks, plummy accents and so on. But generally they do respond enthusiastically to the music, and well they might – there’s no denying the Gentlemen’s abilities and their professionalism, even if this particular reviewer didn’t find as much to warm to here as he might have hoped. 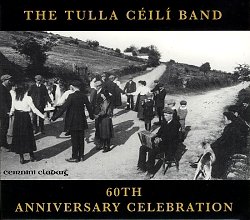 There’s not many bands can issue a 60th anniversary album, and while their longevity recalls that of the now-proverbial Trigger’s broom (1) the Tulla Céilí Band have maintained a fairly consistent approach throughout the six decades. This is dance music straight down the line: jigs and reels, plus a couple of hornpipes, presented for dancing to, pure and simple. Sixty years ago, a céilí band would scarcely have thought of doing anything else. In the meantime, things have changed – the success of concert bands, starting probably with the Chieftains, has had a major influence on the way Irish music ensembles would place a lot of store by formal arrangements, neatly planned harmonies, strongly syncopated rhythms and older types of tune.

None of that here, but if that makes this set sound dull, it’s not; predictable, maybe, but only in the sense that you can trust it to come up with the goods. There’s a couple of instrumental showcases, as flute-players Martin Glynn and Jennifer Lenihan feature in the lovely Blackberry Blossom reel set, and fiddlers Mark Donlan and Martin Hayes do the same with some jigs. Both of these tracks are unquestionably a pleasure, but the emphasis of the disc is the band sound, currently provided by two fiddles, three flutes, two accordions, piano and drums (pipes, concertinas, banjos etc have all featured in previous band lineups). The energy and drive they impart to the tunes is everything a dancer could wish for, the emphasis always on the tune, on bringing out its capacity to lift your feet, with no unneccessary frills. The piano accompaniment contributes most of the harmony, and expertly points up the rhythmic qualities of the tunes.

Historically, it has been 60 years of achievements – taking first prize for a céilí band at one of the earliest Comhaltas fleadhs, releasing a string of influential 78s in the 1950s, recording the first ever LP by an Irish céilí band (Dublin Records DU-LP-1000 New York, 1957), appearing regularly on radio and TV. There was a 40th anniversary album and one for the 50th. In the notes we learn that an inventory of band members drawn up in 1996 came to more than 50 names, and that list included immortal names like Willy Clancy, Bobby Casey and Joe Cooley among many others. P.Joe Hayes was with them from the beginning, and was to be the inspirational leader of the band until his death in 2001. His son - no less than Martin Hayes, one of the most celebrated fiddle players in Ireland today - carries on the family’s involvement with the band. All of this is neatly summarised in Barry Taylor’s booklet notes, alongside a handy set of photographs of the changing faces of the band over the six decades.

(1)  In the British sitcom Only Fools and Horses, street cleaner Trigger was given a special award by his employers for having used the same broom in his job for 20 years. At the award ceremony, he fondly recounts how it has had 17 new heads and 24 new handles (ref: Wikipedia).