Texas Gladden (1895-1967) has been one of the most important sources of songs and ballads and listening to her performances on this album, it immediately becomes clear that she must also be regarded as in the first class as an interpreter of traditional ballads in the Appalachian style. 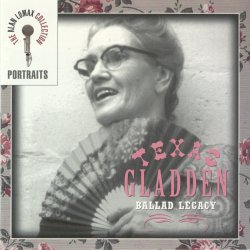 It is also self-evident that her versions of songs and ballads are of the highest quality.  She is in the very first rank of ballad singers in the English language.

We know a lot of these songs at second and third hand through performances in folk clubs and elsewhere over the years.  Joan Baez was just one of many who used Texas Gladden as a source for songs.  There have been relatively few opportunities in Britain to hear her singing on commercial release, though she was included on another recent release of vintage recordings on Rounder CD1511 Anglo-American Ballads, vol 1.

Despite her name, she lived all her life in Virginia and must have been around 20 years old at the time Sharp and Karpeles were collecting their rich treasury of song in the Appalachians.  Some of the stories of these contacts with mountain people give a picture of narrow-minded hillbilly life, little interested in contact with the outside world, but certainly this is not the way that Texas Gladden comes across.  Certainly she and her family were important source singers and quite early on they were in contact with folklorists and song collectors.

However, she seems to have been aware of the importance of songs and as well as sharing them with the collectors, she wanted to hear what they had to offer.  The wonderful Devil' s Nine Questions (sound clip) was learned in 1922 from Miss Alfreda Peel (a horseback, rather than a bicycle, collector!) who had it from a Mrs Rill Martin.  So by the time that Alan Lomax came along, his first visit was in 1941, she was confident as well as articulate.  It is interesting to compare the Lomax interviews here with those in the same series made with British source singers.  She also has much of interest to say about the performance of the songs:

Lomax: You were telling me something the other day about how you thought these songs should be sung.  The best way.

Gladden: Because the songs were uneducated, you know.  I think to get the best results from the old songs that were misspelled and had the words all twisted up in every shape and form.  I think the way they sang them was really the best way that they should be sung.  I don't think a person who sings operetta should toy with them.

Elsewhere she can explain her ornamentation and grace notes and give an analysis of her parents' singing styles, how she was very adept at picking up ballad words at one hearing and so on.  She says that she always remembers the singers that she learned the songs from and the way they sung them.  This is probably why she seems to have different styles in the way she approaches different songs.  She was an artist who was aware of the importance of her singing and her style.  You might expect that she would have taken every opportunity do demonstrate her considerable talent.  Well.  No, she didn't.

Lomax:  You have never made any professional use of your singing, have you, Texas?

Gladden: Been too busy raising babies.  When you bring up nine, you have your hands full.  All I could sing was lullabies.

No regret in her voice.  It's just that this was woman's lot and she was getting on with it.

The attitude also comes over in more than one song and it makes uncomfortable listening (as the Stewarts of Blair's Blue Blazing Blind Drunk also does).  In The Scolding Wife (sound clip) she describes a man thoroughly beating his wife; no humour, no condemnation, just matter of fact reporting.

That there could have been many opportunities for her family music to be appreciated can be gauged from the career of her two-years-younger brother, Hobart Smith.

(The family atlas must have been open at a different page the day he was named.)  His banjo, guitar, fiddle and voice were earning him a good part-time income playing at Minstrel Shows and the like.  He plays with Texas on several tracks to good effect, as on Rose Connolly (sound clip).

The cover picture of her holding a fan has been cropped from a picture of her with Lomax and this appears inside the booklet where it is credited to Shirley Collins in 1959.  In her talk about her work with Lomax, America Over the Water Shirley dwells on the uncomfortable feelings that she got from the prevailing redneck attitudes that she encountered in the Southern States at that time.  We seem to get conflicting attitudes of what this family's stance was.  On Hobart's Topic album (12T187) he plays songs and tunes he learned from black performers and the sleeve notes talk about his enthusiasm for what he learned from Blind Lemon Jefferson.  Texas seems to have been proud to have met Leadbelly on a visit to New York with Lomax.  Though her public performances were very limited, she gained a wider public through singing at the White Top Festival in Southern Virginia in the 1930s.  However, Charles Seeger was very perturbed about the attitudes that festival perpetrated.  "White Top was reactionary to the core.  Under the smoke-screen of pseudo-scholarship, it is really sinister." Elsewhere we get this insight:

Gladden: It's always fascinated me.  I've built up the most beautiful thoughts of Gypsies from that song.  In the song it was a romantic thing.  The Gypsy Davy was like a knight of old; in my mind he was sort of an exalted kind.  I never was so disappointed in my whole life, when last summer, I met up with a bunch of them.

Not many of us over here would compare the travellers that we have met through the music with "knights of old", however the subject brings one of her most passionate performances (sound clip).  Though she lived into the years of real growth in the American folk revival, Texas never became involved in it all.  One wonders what she would have made of the great Scottish women traveller singers if they had had a chance to meet them and share songs.  Would she have been "disappointed" or would she have marvelled at the many songs that they had in common, albeit in wonderfully different versions.  When she talks about what the songs do to her when she is singing them, she echoes sentiments that I have heard from the likes of Betsy Whyte, Jane Turriff and Lizzie Higgins:

The performances on this record are all of a very high standard, even the snippets are full of power, such as less then half of a minute of I Am a Man of Honor (sound clip), but the same cannot be said of the quality of the sound presentation.  There is evidence of what sounds like tape-deterioration at various points with crackling creeping in at times.  Well, the originals are all over forty years old so we should expect this.  Well, up to point, yes, but let's consider that the originals are contemporary with vintage Copper Family recordings recently released by Topic where the recordings have been enhanced to a remarkable degree.  There is little evidence that such efforts have been made here, which is a great pity because the singing is every bit as worthy.  In the two later recordings, Dark Scenes of Winter and Cold Mountains we hear a noticeable improvement in sound quality although the older Texas does not have the same vocal powers.

Comparing this with the other 'Portraits' in this series that have been reviewed on this site, Harry Cox, Jeannie Robertson, Margaret Barry, one wonders how many people will be attracted to this release.  There is still a body of people who will have heard the three great British singers and would be able to relate to the releases.  How many people living in Europe today will have heard Texas Gladden sing live?  Tom Paley?  How many others?  It would be a great pity if this release were ignored because Texas Gladden is an important figure and a fine stylist.

Thinking of those other three 'Portrait' albums they all got considerable stick, on this site and elsewhere, for their sloppy, mistake-ridden booklets.  I know very little about Texas Gladden's life so I am unable to check the facts as I was with the British singers.  What I am aware of is that John Cohen has produced a very interesting, analytical, informative, concise and well-written piece that is as stimulating as the others were dull.  He even manages to answer my question of why we should be listening to Texas Gladden and her ilk:

Cohen: How can a modern person approach this distant tradition?  Although ballad singing still reverberates in country music and in bluegrass, can these old love songs speak to the heart of someone today?  Listen to these songs as stories, as a narration of old-time adventures or as the dramatisation of life's critical passages, and find yourself carried along to unexpected places.  Listen to the fine ways the songs are sung, to the deliberate turns, embellishments, and nuances of Appalachian singing style.  These old stories, heard in their home settings and carried in the voice of a great traditional singer, can be an experience more intimate and immediate than the exotic trips that tourists take today.

I have thoroughly enjoyed and been rewarded by the opportunity to listen many times to the singing of Texas Gladden and would thoroughly recommend this album to anyone with a serious interest in traditional song.