The impact of the accordion, since its invention in the 1830s, upon traditional musics worldwide needs no great bluster from me here.  Suffice it to say the instrument's assets - portability, volume and being relatively easy to learn - ensured such immediate popularity that within a few decades it had become assimilated into (and on occasion had dramatically transformed) most musical traditions - even in some of the remotest areas around the globe. 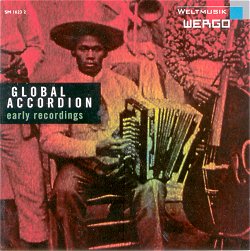 And 26 fascinating examples of this unlikely phenomenon, taken from commercial recordings made between 1927-48 have been compiled on this splendid CD by Christoph Wagner.

But before we get to some of the squeezebox's more exotic backwaters I should point out that the best represented region on this collection is the instrument's birthplace, namely Central Europe.  With four tracks from Austria and one each from Switzerland and Bavaria, I guess that this is right and proper, but I have always felt that here the distinction between Folk and Popular (and even Light Classical) music has always been somewhat blurred, and despite a nice hammer dulcimer here, a cheeky tuba there and even a Cajun type yell on the unusually boisterous Swiss track, I fear that the overriding mental image is one of buxom barmaids, flowing tankards and little leather trousers.  Fun at the time but not to be dwelt upon the next morning.

Scandinavia took to the instrument immediately and there was a real concern at one time that its popularity would signal the end to the region's older fiddle styles.  Fortunately we now know that this fear proved unfounded and we can now listen to the exciting accordion and fiddle polka of Finnish Americans Aili and Lyyli Vainikainen and a suitably syrupy waltz from the deservedly popular Lager and Olsen without regret or guilt.  But even these fine efforts are overshadowed by the two stunning tracks from the Auvergne -

bourrées from Adrian Bras (1928) and Ernest Jaillet twenty years later.  With their thunderous rhythm and mighty playing this is wonderfully exciting and very rare music.

We are probably on more familiar ground with the Irish and English tracks (though strangely nothing Scots, given Keith Chandler's involvement in the project).  The New York Irish brothers Flanagan (Joe and Mike) are always a delight and here excel on a virtuoso hornpipe pairing while Yorkshire's George Tremain - remarkably, England's only commercially recorded melodeon player -

puts in a very fine and disciplined performance (as befits his Longsword Dance background) on his contribution from 1935 (sound clip).  The CD claims it to be Huntsman's Chorus but I'm fairly sure it's Kendal Ghyll.

Crossing the Atlantic we are treated to a track from the prolific legacy of French Canadian Alfred Monmarquette.  Purely personal, but I have to say that I have never found the music of Monmarquette or his many contemporaries that uplifting - often lacklustre playing swamped by irritating novelty accompaniment.  That said, his contribution here, Clog de William Durette, is an excellent performance.  Half a century ago many a Western Swing or Country band and even a few Bluegrass groups sported an accordion (and often jolly rotten they were too), but nowadays the instrument is forever linked by most Americans exclusively with Tex-Mex and Cajun music and you can't really go wrong if you pick Narciso Martinez and Amadie Breaux to represent these traditions.  Martinez' finger-busting virtuosity must have deterred as many as it inspired, while Les Breaux Freres' Fais Do Do Negre is quite simply a classic Cajun performance.

But intriguingly, despite his long association with the musics of both Texas and Louisiana, Leadbelly's famous Corn Bread Rough (sound clip) shares nothing with these other traditions.  It is quite simply desperately exciting square dance music which to these ears shares more with Lowestoft than Lafayette.

That musical melting pot, the Caribbean, is represented by two lovely little dance bands where the accordion combines as lead instrument with a trumpet, less to the fore on the Puerto Rican plena than the Dominican merengue although on both these 1929 tracks it's the vocals that really grip the attention.  But for real showmanship try the 1942 track by Brazilian Luiz Gonzaga - very fine.  Probably the most intriguing sides here though are those from Africa where a colossal number and range of instruments found their way via missionaries, traders and seamen and where their popularity is widespread still.  George Williams Aingo, a West African singer recorded in London in 1927 is backed by a concertina player who uses his instrument primarily to hold a simple melody behind group vocals and percussion, while the player from South Africa is altogether more adventurous, quirky and exciting.

But just listen to the superb Madagascan piece (sound clip - Rambalamanana) from the famous 1930 Paris session where the concertina is simply overwhelmed by some of the most joyously uplifting singing imaginable.

Eastern European traditions are represented by Russian Gregori Matusewitch on Yidisher Melodien - which I feel, although a virtuoso performance, owes more to a classical than klezmer background - while there is a stunningly soulful track of rembetika by one Papatzis.  The instrument is not often associated with this great music, but is works superbly well.  Would it be ungracious of me to suggest that the accordion favours Greek music more than the bouzouki does Irish?  Probably.  Meanwhile as fine a piece of playing can be heard on an oberek by Pole Stanislaw Bagdzinski.  So here we are then, back where it all started (well almost) and my favourite track on the CD.  Viva La Giga by American Italian Caesare Pezzolo, recorded in Los Angeles in 1929 is just simply joyous country dance music.  You can just see Bacup dancing to this!

There you have it.  Wonderful and varied music, fine sound, stunning illustrations and interesting notes.  Can't fault it.  Wergo is a division of Schott Music & Media GmbH, Germany.  E-mail: info@wergo.de   Web: www.wergo.de

(PS - Thinking of American accordions reminded me that in July 1976 I was sitting in a diner one Saturday morning opposite the Greyhound Bus station in Richmond, Virginia, waiting for our bus.  On the other side of the road sat a colored guy aged about 60 holding a large button accordion.  Although I waited about an hour, he played not one note!  It was very early and there were few people about.  A long shot - but I just wondered if any of our American readers might know who he was.)