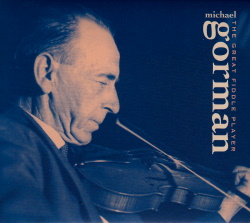 Michael Gorman (1895-1970) was born in Glasgow to Irish parents who had emigrated to find work.  He returned with his father and five siblings to Doocastle on the Mayo/Sligo border on the death of his mother in 1905.  Around 1910 he started the life of an itinerant farm worker, cutting turf in Ireland in spring before travelling to work on potato or cereal harvests in Scotland, Yorkshire, and sometimes further south.  While it's suggested there was some music in his family, Michael Gorman was given his first lessons on the fiddle back in Ireland by local teacher Jamesy Gannon.  Music was an important part of rural life and dozens of fiddle and flute players lived in Michael's area, including well known family names such as Coleman, Henry and Gardiner.  Few earned a living from music but some, as we know from their 78rpm recordings, emigrated to America where prospects were seen as better for musicians.

Gorman married Ann Kildea in 1916, and shortly afterwards moved to Yorkshire, then to London in 1918.  He came home in 1930 following an accident to his left arm but was back in London by 1939, later supervising prisoners of war in Dorset.  Towards the end of the war, Gorman was in London again, this time living with Mary Brennan in a house that quickly became a meeting place for immigrant musicians, including Martin Wynne and John Vesey, who was a pupil of Michael's.  These and others kept the music going at the home sessions for around 10 years.  In the early '50s Gorman started to take paid gigs at weddings and other social events and was 'discovered' by Peter Kennedy.

About this time Gorman used the recording booth in HMV in Oxford Street, London and a studio in Leigh on Sea to make one-off acetate recordings, several of which feature in this collection.  These show a fiddle player at the peak of his abilities, playing in a strong Sligo style, with simple but effective rolls and triplets, occasional double stopping and subtle variation.  Recordings made in 1951 by the BBC of Gorman's duets with flute player Mick Flynn, some of which were included on the Topic CD collection of his playing, The Sligo Champion (Topic TSCD525D), show a similar drive in the music.  Overall, the tracks from the 1950s in this collection are as good an example of old style Sligo music as you could wish to find.  Tracks recorded later when Gorman was well into his 70's have a slightly rougher sound.

The tunes on this collection are almost exclusively reels and jigs; there's one song and a set dance.  Apart from his own compositions, the tunes are all standard Sligo repertoire.  Many come from Jamesy Gannon, and the settings are generally close to those recorded by Michael Coleman who was also one of Gannon's pupils.  One exception is the tune called Bonnie Ann on CD 1.  This tune has a much more modal shape to it, and sounds to our ears like it may be a version of a tune by the Galway fiddler Paddy Kelly, that Gorman might have picked up from Martin Byrnes whom he met in the late 1940s.  Tin whistle player Kieran Collins from Gort Co Galway is also noted as a source for new tunes.  The Humours of Lisadell is mentioned in Reg Hall's sleeve notes as a composition of Michael Coleman.  I wonder if this is a slip of the pen from Reg Hall, as Coleman never recorded the tune.  It was recorded, and possibly written, by Paddy Killoran.  Gorman plays bowed triplets instead of rolls on this tune following Killoran's way of playing it.  Killoran was also the source of the medley The Sligo Maid & Molloy's that dates from 1956 on this collection and a recording 10 years later on The Sligo Champion.

Mary Brennan died in the early 1950s and Michael then formed a close association with Margaret Barry, the traveller singer from Cork.  The pair made a couple of LPs, Barry very much to the fore as she obviously was more extrovert than Michael.  Most of the recordings across this collection feature Maggie Barry on the five string banjo.  Her concept of rhythm and chords is not to everybody's taste but she is usually low enough in the mix not to be obtrusive and after a while the ear can just tune her out.

The story has been told many times of the trip to Poland made in 1955 by Michael Gorman with Willie Clancy and Martin Byrnes.  The story goes that the trio made a recording there and Byrnes brought a copy back but it broke in his luggage.  Reg Hall managed to acquire a tape copy from Poland some years ago and three tracks appear at the end of the second CD.  The reproduction quality is extremely poor and these tracks will be of interest only to the completist.

Overall, though, this is a welcome addition to the musical canon of a man sometimes referred to as the "grand old man" of Irish music in London.  He was well recorded as a result of his relative fame, but this collection offers more examples of his skill and power in the 1950s than has been available previously.  Supported by an informative booklet and detailed breakdown of recording dates and location, this is another treasure trove of Irish music in London.  We must thank Lamond Gillespie who has done a great job in putting the whole package together.  The 2 CD set is available from Lamond's website at http://www.lamondgillespie.co.uk/michael-gorman-double-cd/