Grand Union are a well-established English dance band from Gloucestershire, and this 7-track CD-R is not a full-length commercial product but a promo/demo/call it what you will. 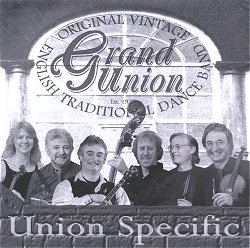 Hence, it will only cost you a fiver.  That notwithstanding, it contains a lot of excellent music, very well played in what can now be described as the modern traditional English style.

The front-line comprises two fiddles, melodeon and mouthorgan, with tenor banjo and double bass back-up.  Sometimes Martin Brinsford (mouthorgan) drops back onto percussion, or Tim Normanton (banjo) moves forward to play tune - thus it's a pretty flexible ensemble.  The playing throughout is first rate from all members, and one might (unusually) want to single out the thoughtful and restrained bass of Kevin Bown.  The two fiddles work very well together where they're brought to the front of the mix, as do the melodeon and banjo on Little Red Wagon / Art Wooten's Quadrille.

You also get a broad selection of tunes which, although there are a few well-known items, include a number of good'uns which will be unfamiliar to many listeners.  Among these are three new compositions from fiddler Taz Tarry, including his excellent Out to Lunch, paired with the Portabello Hornpipe.  Most dance types are covered, except the waltz, and all seem to me to be played at just about the right speed for southern English dancing, and with plenty of lift.  I do have two very minor quibbles though: the final track is described as 'reels', when I'm certain that anyone dancing to them will be doing the polka; and Lemmy Brazil's No 2 is played as a schottische when, in reality, it's a stepdance tune.  Don't mistake me here - it works fine as a schottische - but it seems rather a shame to use it as such when there aren't all that many southern English stepdance tunes to choose from, and there are plenty of other fine schottisches.

The multi-session CD also contains some additional information, accessible through your computer.  Place it in the CD drive and it will auto-run to access a suite of HTML pages with further info about the band, the music and contact/booking information.  It seems that this is just the Grand Union website copied here, so it also reproduces the CD Insert tune notes and allows excerpts of each to be played as MP3 files by the Windows Media Player.  Since the CD already has the full tracks as audio files, this seems somewhat superfluous in this situation.  ABC versions of the tunes might have been more useful, perhaps?

The whole thing has been well recorded, edited and presented - and it's a nice not to have to moan about default 2-second inter-track gaps for a change!  Thoroughly recommended, the CD is available from Taz Tarry, 6 Fairview Close, Watledge, Nailsworth, Glos GL6 0AX for just a fiver.