Heroes are getting a bit thin on the ground these day.  And perhaps that's no bad thing.  After all, do we still want self-promoting Generals saving bits of the Empire; dying Admirals beating our European neighbours in naval encounters; or, come to that, vainglorious cavalry officers meeting their nemesis at the hands of the Sioux?  And yet, most of us do have the odd hero or two tucked away in the back of our minds.  In my case these include people like Roscoe Holcomb, Dock Boggs, Wade Ward, Dillard Chandler and, of course, Hobart Smith.

Hobart was from Saltville in the bottom left-hand corner of Virginia, close to the borders with North Carolina and Tennessee.  He was born May 10, 1897, and first worked in farming and waggoning.  Later he was a house-painter.  For one twelve year period he worked as a butcher. 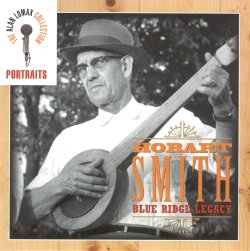 But, for most of his life, he was a musician, playing for local dances, providing music for outdoor baptisms and indoor church services, and, like Wade Ward and Uncle Charlie Higgins, playing at land auctions.  Around 1915 he worked in minstrel shows.  By then he was playing the fiddle and had been playing the banjo for at least eleven years.

A black man, Jim Spenser, was the first fiddler that Hobart heard.  "There was an old colored (sic) man who was raised up in slave times.  His name was Jim Spencer.  He played Jinny, Put the Kettle On and all those old tunes like that.  And he would come up to our house and play." (Quoted by Tony Russell in Blacks, White and Blues - 1970).  According to Cece Conway, there were at least three black banjo players living close to his home when Hobart was a child (Mountain Echoes of the African Banjo, 1995), although she adds that, 'I have found no specific evidence of their influence upon Smith's banjo playing, (although) his account demonstrates his own appreciation of African-American musicianship, style, and repertory and his own eagerness to borrow from blacks'.  In 1918 Smith teamed up with Clarence Ashley, who was to make a number of important commercial recordings in the 1920s, and who had also been influenced by black musicians.  Even a musician such as Frank Proffitt, who built his own banjos and dulcimers and lived 'way back' in the mountains, picked up songs from a black musician, Dave Thompson - one of the musicians who influenced Clarence Ashley.

In 1946, Hobart told Alan Lomax that he had "... made music all of my life, up to when I was married.  Practically made a living making music."

Hobart and his sister, the ballad singer Texas Gladden, first came to the notice of the outside world while attending the White Top Music Festivals, which ran from 1931 to 1939.  White Top was the brainchild of the composer John Powell and Annabel Morris Buchanan and seems to have been conceived to counter the commercializing effects that record companies and radio stations were making on mountain music.  Powell, a racist nutter, was addicted to the notion of 'Anglo-Saxon' culture, and was 'intent...on maintaining the purity of the Anglo-Saxon race'.  (See David E Whisnant's excellent All That is Native and Fine, 1983, for more on Powell and his crackpot ideas).  Powell decided that only white performers could appear at White Top and that all songs and tunes had to be vetted before they could be performed.  Listening to Hobart Smith's guitar style on K.C.Blues and Railroad Bill - so reminiscent of Etta Baker - I find it hard to imagine how Hobart managed not to sound like a black performer at White Top.  One fact, not mentioned by John Cohen in his booklet notes, is that Annabel Morris Buchanan did not totally agree with John Powell when it came to his beliefs.  In 1933 she told him, "(For) two cents I'd throw up the whole thing ...  I believe we are doing more harm than good." (Quoted in Whisnant).

In 1933 Eleanor Roosevelt, wife of President Roosevelt, attended the Festival, where she met Hobart and Texas, later inviting them to the White House to perform for her husband.  John Cohen's otherwise excellent notes, seem to be slightly out when he implies that Texas and Hobart first appeared at White Top in 1936.  Folklorists such as Charles Seeger and John Lomax also visited White Top.

In August,1942, Alan Lomax, the son of John, paid a visit to Saltville to record members of the Smith family on behalf of the Library of Congress.  Twelve of the forty recordings that Lomax made of Hobart Smith that August are included on this CD, which is part of the 'Portraits' series of recordings currently being issued by Rounder.  (A companion CD, devoted to the singing of Texas Gladden - Rounder 1800 - is to be issued shortly)  Blue Ridge Legacy also includes a further half-dozen Lomax recordings from his 1959-60 field trips, some 1946 recordings made in New York City by Moe Asch, and a selection of later recordings made of Hobart by a number of folkmusic enthusiasts in their homes and at concerts.  (As has been seen elsewhere 'The Alan Lomax Collection' does not neccessarily mean that all the material was collected by Lomax.  In this instance there are thirty-one tracks, ten of which were recorded by others.  On some CDs in this series, none of the material is collected by Alan Lomax!)  There are ballads, fiddle tunes, banjo tunes, cuts of stringband music, a quartet of Smith Family members singing Wayfaring Stranger, four mountain tunes played on the piano, even one tune played by Hobart on the electric guitar.  It is a wonderful album, chock full of outstanding music performed by one of the greatest of all the Appalachian musicians.

Let's start with the songs and ballads.  There are two Child ballads, Hangman Swing Your Rope and The Little Schoolboy, a version of The Two Brothers.  This latter is from the 1942 session and is different from the version recorded in 1959, which can be heard on Southern Journey - Ballads and Breakdowns (Rounder CD 1702), although it needs to be said that the recording of Graveyard Blues is the same as that which appears on Rounder CD 1702.  Why?  Is there any need to repeat recordings in this manner?  Other songs include Drunken Hiccups, The Cuckoo Bird, Claude Allen, Railroad Bill, Poor Ellen Smith and Hawkins County Jail.  This latter is set to the tune that the ballad singer Dellie Norton of Sodom Laurel in Madison County, NC, used to carry her version of the Irish song William Reilly and Colleen Bawn, which Dellie called Young Reilly.  At times the interplay between Hobart's fiddle and voice - on Drunken Hiccups - or banjo and voice - on The Cuckoo Bird - is just staggering.

And the same may be said of the instrumental tracks.  Listen, on Arkansas Traveller, to how he uses no less than seven repeated pull-offs at the end of the first phrase of the tune.  Listen to Last Chance and note all the extra melody notes that most other performers would omit.  Or, try listening to the tune Chinquipin Pie with its modal complexity.  And then notice how Hobart transposed his banjo styles onto the piano, with tunes such as Sourwood Mountain and Going Down the Road Feeling Bad, where he quickly switches keys from G to F.  On this latter tune it is easy to hear at which point Hobart would drop his thumb when playing the same tune on the banjo.  John Cohen states that it is unclear how some of these pieces functioned in tradition, 'for they are neither songs nor dance tunes in the usual sense'.

Hobart Smith's Pateroller, played beautifully on the fretless banjo, is interesting in that he picks each note cleanly.  Most mountain banjo players that I have met who play fretless banjos make constant use of the slides that are inherently available on such an instrument.  But that was not Hobart's way.  Interestingly, his Pateroller differs somewhat from the 'standard' form of the tune, although it is very similar to the tune Salt Creek that I recorded from Dent Wimmer of Floyd, VA.  And, the lovely What Did the Buzzard Say to the Crow?, which John Cohen identifies as a version of Did You Ever See the Devil, Uncle Joe?, that was recorded by Fiddling Powers and Family, is very similar to the tune that Pug Allen called Christmas Holiday.

John Cohen ends his notes with a number of philosophical questions and speculations, which, at times, tell us as much about John and the American revival as they do about Hobart Smith and his music.  We are told that Hobart's family saw him as 'a famous musician ...  traveling to distant festivals in the cities of the North ...  Yet most of his music-making was local, played for his family or his community.'  'Did Smith's influence,' John asks, 'extend to the folk revival musicians alone, or did it hold a message for the traditional musicians of Virginia as well?'  Sadly, the American revival came too late for Hobart, who died in 1965.  In November, 1964, Texas Gladden wrote to Alan Lomax, 'I've waited patiently to see if you could do anything with those recordings from the Library of Congress ...  Hobart is desperately ill ...  and I too am burdened with heart trouble, etc.  I am in dire need of financial help myself'.  Writing about Appalachian singers in 1917, Cecil Sharp noted that 'Dirt and good music are the usual bed-fellows'.  Perhaps we should also say that 'Poverty and good music are, sadly, also bed-fellows'.

John Cohen concludes his notes with the statement, 'There are many tangled reasons (why) the publication of this material has been delayed for more that a half century.  It has nothing to do with the quality of the music or the significance of the musicians.  But it is with a sense of reconciliation and deep satisfaction that we now can finally make this music available'.  I am sure that John will have thought hard about the words that he chose to use in his notes.  But what exactly does he mean by 'reconciliation'?  Who is being reconciled?  This album is certainly too late for Hobart Smith, so is John talking about a reconciliation within the American revival community, or what?

Hobart Smith - Blue Ridge Legacy is as find an album of old-timey music as we could ever expect.  If you like this type of music, then this really is for you.  If you don't - give it a listen, and be prepared to be amazed.  Who knows, if it sells well enough, perhaps it will persuade Folk-Legacy Records to reissue Hobart's 1963 album, Hobart Smith of Saltville, Virginia (Folk-Legacy FSA-17).