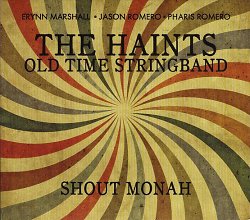 “The Haints have taken their inspiration from a wealth of archive recordings and first hand within living folk traditions,” it says on the package, and they have evidently taken most of their repertoire from the same sources.  Repertoire is one thing - anybody can learn a tune from an old record - the more important question is what you do with it.  The Haints, a Canadian trio who consist of Erynn Marshall on fiddle, Jason Romero on banjo and Pharis Romero on guitar, tackle their material with respect and vitality.  For some, respect can mean treating the music as some fragile old relic that might break if you look sideways at it, and for others vitality can mean tramping all over it.  Fortunately, the Haints seem to understand that the two qualities are not incompatible, and the result is a highly enjoyable album of rich and vigorous versions of (mostly) traditional tunes and songs. Fiddle player Erynn Marshall has evidently drunk deeply at the traditional well, and it’s a pleasure to hear the way she shrugs off the constraints of formal phrasing on a tune like Knoxville Rag, or syncopates so subtly on Eadle Alley, learnt directly from the great West Virginia fiddler Melvin Wine, who died aged 94 in 2003.  I love the way they wind this tune round and round its basic shape over no less than five minutes, turning almost hypnotic in its repetitions.  The following track, Old Christmas Morning is played solo by Marshall as an object lesson in traditional fiddling technique, but with plenty of genuine engagement.

But she’s not the only fine instrumentalist here - banjo player Jason Romero has evidently learnt well from the tradition (although perhaps more secondhand, and via records, but that’s hardly a problem in this day and age).  His solo playing on Devil’s Dream, his accompaniment to Charming Betsy and his close duetting on the Chattanooga set show him a very fine player indeed, and his lead vocals on Lowe Bonnie and Riley The Furniture Man are pretty good too.  Guitarist Pharis Romero (Jason’s wife) doesn’t take any solos, but as well as being a highly sympathetic and responsive accompanist, she can pick most effectively, as for example, on the aforementioned Eadle Alley.  She can sing, too, handling Land Norris’s odd version of Charming Betsy skilfully and to great effect.  Most of the material here derives from white musicians, but Pharis also sings lead on a version of Henry Thomas’s Bob McKinney, a treatment that for this reviewer is the least successful on the album.  It would be going too far to suggest that they sound suddenly like any old folk group, but a lot of the qualities that I admire so much in other tracks seem to be missing on this one.

The album ends with Life’s Fortune, a waltz composed by Erynn Marshall, and it’s a pretty good tune, too, enhanced by a second fiddle, played by Daniel Lapp, a very pleasant way to end the proceedings.  The disc is packaged attractively, with a well-designed booklet giving the background to the songs and tunes, as well as the tunings of the instruments used.  Altogether, the Haints are well worth investigating - well-tended roots to give them substance and real quality, but with enough freshness and character to make them distinctive and give an authentic appeal.