[Readers will be aware that volume 2 of the Edden Hammons Collection was previously reviewed in Musical Traditions by none other than the famous detective, Mr Sherlock Holmes.  It was our intention that Mr Holmes should also review volume 1.  However, we regret to say that he is currently holidaying in the vicinity of the Reichenbach Falls and is failing to reply to our correspondence.  Accordingly, we have sought elsewhere to find a person suitably able to carry out this task.]

Volume 1 of the Edden Hammons collection was originally issued in LP format in 1984 and this reissue CD contains exactly the same fifteen tunes, with nothing extra added. 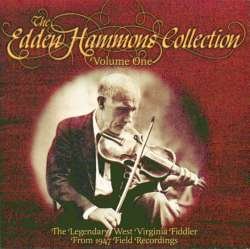 Most people reading this review will, I think, already know the name of Edden Hammons.  An uncle of Burl, Sherman and Maggie Hammons, whose songs and tunes can be heard on the double CD The Hammons Family: The Traditions of a West Virginia Family and Their Friends (Rounder CD 1504/05) and, as mentioned above, the subject of a double CD (West Virginia University Press SA-2), which includes almost all of his other known recordings.  He was an extremely accomplished performer, certainly on a par with Ed Haley of Eastern Kentucky who is often deemed to be one of the best fiddler-players ever recorded, and, again like Haley, was the carrier of some wonderfully fine and rare tunes.  And, yet again like Haley, he was never recorded commercially.  Haley, it will be recalled was recorded by members of his own family, while Edden was recorded in the same year (1947) by folklorist Louis Watson Chappell, the author of the landmark work John Henry, A Folklore Study (1933) and the collection Folksongs of Roanoke and the Albermarle (1939).

Some of the tunes included here are standards, known throughout America.  Arkansas Traveler, Fine Times at Our House, Mississippi Sawyer and Forked Deer, for example.  To my ears Big Fancy also seems to belong to this group, sounding as it does like a version of the well-known tune Rye Straw.  Edden made two recordings of this tune, the second time using the title The Old Drake which seemed to puzzle Chappell.  I could suggest that Edden, well aware of the vulgar and bawdy nature of some of the verses that are attached to Rye Straw, could have been embarrassed at recording this tune and, in the process, did not wish to draw attention to the words of Rye Straw.  But, this hypothesis seems to have already been shot down by Edden himself, who named one of his other tunes Old Black Cat Shit in the Shavings for Chappell.

Two tunes, Love Nancy and On My Way to See Nancy, are folksong airs; the first used for the song William and Nancy (Courting Too Slow), the second for several distinct songs and ballads.  Edden had a number of airs in his repertoire, including tunes for Mary Across the Wild Moor and the ballad of The Housecarpenter.  These are included on volume 2.  The practice of playing song airs seems to have largely died out in present day Appalachia, although at one time it must have been commonplace.  Ed Haley, for example, made recordings of Man of Constant Sorrow and Silver Dagger (Rounder CDs 1131/32 and 1133/34), while John Morgan Salyer, also from Eastern Kentucky, played airs for the songs Gilda Roy and William Riley (Appalachian Center cassette AC003).

Another slow tune, Queen of the Earth and Child of the Skies, is a version of the Irish air The Blackbird.  Apparently it was once well-known in southwestern Pennsylvania as a funeral march, where it was played on fife and fiddle.

Some tunes are especially associated with the Hammons family.  Sandy Boys, Shaking Off/Down the Acorns, Falls of Richmond, Old Greasy Coat and Washington's March.  Edden played the latter in the same tuning that is often used for Bonaparte's Retreat and, interestingly, Ed Haley incorporated Washington's March into his version of Bonaparte's Retreat (see Rounder CD 1133/34).  As for Falls of Richmond - I doubt if we shall ever know if the title refers to the falls, or rapids, in the James River at Richmond, VA; to the British invasion of Richmond in January, 1781, or to the Union attack on Richmond in April, 1865.  If one of the latter, then it was once, no doubt, titled The Fall of Richmond and, as such, it could easily have originally been played as a march.

Unlike volume 2 - where there are no tune notes - volume 1 does contain Alan Jabbour's excellent original 1984 notes to the tunes.  I would, however, make one small comment.  When I first visited the area around Sodom Laurel in western North Carolina in 1980, several people told me how much they disliked being called hillbillies - this from people like Cas Wallin who would frequently quote Socrates, Shakespeare and Dickens to me! - and so I was surprised to see Alan Jabbour referring to a hillbilly record in his notes to the tune Waynesboro.  Yes, I know that the word was used in the 1920s, but surely the term 'old-timey' would have been far more appropriate.  Incidentally, the recording in question - Waynesburgh, recorded in 1927 by Fiddlin' Doc Roberts - has been reissued recently on Document DOCD-8042.  Doc (b.1897) was a teenager when he learnt the tune from Owen Walker, a black fiddle-player from Richmond in Madison County, KY.  Some of Edden's ancesters came originally from Knox and Whitley Counties in eastern Kentucky, not too far from Madison County, and I do wonder whether or not some of Edden's tunes may have originated in this part of the mountains.  Darley Faulks (b.1895), yet another eastern Kentucky fiddle-player, commented that his version of Waynesboro, which he called Andrew Jackson (possibly after General Andrew Jackson (1767 - 1845) - seventh President of the USA), had been played by both his grandfather and uncle, and that the tune was well-known long before Doc Roberts made his recording.  (See Rounder CD 0377).

The final tune included here, Digging Potatoes, is, in the words of Alan Jabbour, a genuine curiosity .  It is one of those tunes that manages to sound familiar and yet distant at the same time.  Could it once have been an Irish jig - or even a 9/8 slip jig as Jabbour suggests?  Who knows.

The Edden Hammons Collection - Volume 1 is essentail listening for any old-timey enthusiast.  It caused a stir when it first came out in 1984.  Now, with greatly improved sound quality, it has to be one of the reissue albums of the year.

Both volumes are now available from MT - see our Records page for details.