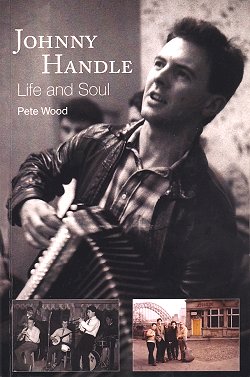 Pete Wood's latest book is another love story about his adopted home, the North East of England (following The Elliots of Birtley in 2008).  Johnny Handle's life has indeed been varied and very interesting to those of us on the folk scene.

Chapter 1 tells of his early days - his father was a schoolteacher who had been educated at 'the best school in the city (Newcastle) Royal Grammar School', and the family later moved to working class Walkerville, where Johnny became 'a middle class lad living in a working class area'.  Pete tells of Johnny's experience gaining a place at Heaton Grammar School, and of his own similar story attending (posh) Manchester Grammar School.  Johnny left school at 17, abandoning A level studies, and started work as a 'datal hand' at Dudley Colliery.  This job allowed him day release at college where he qualified to become a 'mine surveyor'.  NB - Fred Jordan, noted in Derek Schofield's Guardian obit as 'always top of the class, he nevertheless left school at 14 and became a farm labourer' - there is a similarity, isn't there?  Note that Johnny was never able to play comfortably from the dots, even though was sent to three different piano teachers before he was 10.

During his days at school he became interested in youth hostelling and jazz and it seems that he could play almost any musical instrument by ear as soon as he tried.  He followed the Louisiana Jazz Band at the Blaydon Conservative Club (!) and in 1952 took over the piano from local jazz hero Clem Avery, who had gone to do national service.  By 1955 Johnny was playing (very battered) cornet, trumpet, a sort of bass, and banjo - essential to any trad jazz band - and then the sax, and then euphonium.  His brother Brian Pandrich, eight years younger than Johnny, joined his brother's skiffle group on guitar.  Johnny's name is Alan John Pandrich: 'His mates started to call him Panhandle, and when he played with the school jazz band they just called him Handle'

Johnny, like so many of us, graduated from jazz to skiffle and then on to folk.  By 1958 Johnny and fellow Geordie Louis Killen (from Gateshead) had started a folk night at the local jazz club.  Louis had been living 'doon sooth' and had taken on Ewan MacColl's mantra 'sing songs from where you come from' (although MacColl hardly followed this rule himself).  Johnny and Louis sang many songs from the north east, learning quite a few from Bert Lloyd's 1952 book Come all ye Bold Miners.

At around the same time Johnny met up with Colin Ross, Northumbrian piper and fiddler, lifelong friend and musical partner.  Johnny, Louis and Colin were involved in some Topic records and in 1961 made the EP The Collier's Rant - some of Johnny's early compositions and mining songs were recorded on another EP Stottin' Doon the Waal.  Colin Ross was a lecturer at Newcastle Poly (now Northumbria University) and he persuaded Johnny to enrol, which led eventually to him doing a teacher training course 1965-67.

The chapter The Early Folk Club 1958 to 1965 follows Johnny et al from the Barras Bridge Hotel known as 'The Sink', via The Liberal Club, to the now famed Bridge at the side of the High Level Bridge in Newcastle.  At this time Colin married the much loved - and now very much missed - Ray Fisher.  Johnny's second wife, Alice, got a job as caretaker of the Black Gate, gatehouse of the castle and over the road from the Bridge.  This place housed a flat for the couple (good for sessions after evenings at The Bridge), the library of the Antiquarians' Society, where Johnny picked up much local material, and a permanent display of Northumbrian pipes from where Johnny was able to borrow a practice set and, with the help of Forster Charlton, learn to play.  Forster and Colin also made and mended pipes, so Johnny had a go at that too.

In a section called 'two important newcomers' Pete introduces Tommy Gilfellon, a 15-year old enthusiast from Stanley.  He was resident at Harry Boardman's Lancastrian Wayfarers' Club, and soon became a resident at the Bridge.  Having been in a rock band (as opposed to Johnny's jazz club days) he could really play guitar.  He and Johnny started gigging together.  Just before Tom went back to Manchester University (so a bit older than the 15 first mentioned) another young enthusiast started coming to the Bridge.  This youth was Alistair Anderson.  He was particularly interested in dance tunes, and Colin Ross' fiddle playing soon showed him, slowly but surely, how to play them - on mandolin at first, but fortune was with him when he saw his first concertina, which had been played by his mate's grandfather.  Pete's take on his swift mastering of the instrument is 'he quickly established himself as the foremost concertina player in the country' - well, not quite Pete, not in the early sixties.  Thereafter a new, and very important, band was formed whose name would become The High Level Ranters - Johnny, Colin, Tommy and Alistair, with local EFDSS caller Graham Binless.

All the time Johnny was playing Northumbrian tunes for dances, and performing solo or with Louis or Tommy in folk clubs, he was also bold enough to play (and succeed) in Working Men's Clubs, and play the piano in any circumstance, including taking it apart and rebuilding it on stage, during a performance.  He really does appear to have been able to perform anything on any instrument (more or less), write and sing silly songs, and make some television appearances.  Philip Donellan, much respected TV documentary maker, made Sunderland Oak, a 'film about the deteriorating shipbuilding industry in Sunderland', and asked Johnny to write the music and songs for it.  Johnny also went on to work with Centre 42, the TUC creation, which was described as:

A cultural hub, which, by its approach and work, will destroy the mystique and snobbery associated with the arts … where the artist is brought in closer contact with his audience, enabling the public to see that artistic activity is part of their daily lives: Centre 42 Annual Report, 1961-62.

Just the job for Johnny Handle!

The following chapter The Folk Revival at it Height names the important movers and shakers, the important festivals, e.g. Sidmouth and the Keele Festival where one could see everyone, traditional and revivalist.  Johnny and Colin went as separate musicians: doing concerts and workshops; playing sessions with anyone who would, including, to Johnny's delight, Bob Cann; and making the most of being surrounded by like-minded people.

By the next Keele (1966) Johnny and Colin took Tommy and Forster Charlton with them - and soon thereafter became the High Level Ranters.  In this year Topic released the LP Tommy Armstrong of Tyneside which 'helped to establish the North East as a vibrant place in the developing folk revival'.  The Ranters, Johnny, Colin and Tommy, played the tunes on the album, though Johnny's fine piano playing was criticised - goodness, weren't we all up ourselves back then!  As Pete points out when Armstrong was at his most popular early in the twentieth century 'every pub and public place had a piano'.

In, I think, 1965, Johnny, seeing the downward turn in the mining industry, went on a teacher training course.  In fact by 1967 all members of the Ranters were teachers - when I looked at this I realised how very many in the folk world are, or have been, school/college/university teachers.  They're obviously the people with nothing (paid) to do during the festival season.

At this point Christine Hendry finds a place in the tale.  She is Scottish and had started going to St Andrews Club when she was still at school (1963-4) where she heard the Scottish greats, such as Jeannie Robertson and Norman Kennedy.  At 16-ish she became a resident.  Very luckily for her she went on a club visit to Marsden where she met Ray and Colin and went to the Bridge for the first time.  She was very taken with the music - not common at St Andrews - and she abandoned her psychology degree at Edinburgh, and started a teacher training course (!) in Newcastle in 1967.  Lucky Bridge audience to have two great female Scottish singers as residents - Chris Hendry and the wonderful Ray Fisher.  Despite moving far away to Oxford and Bristol, a very long time later - 1994 - Chris married Johnny.

As the revival moved on the Ranters continued to play, record, and their popularity to grow.  Johnny, Colin, Tommy and Alistair took on all the well established British folk clubs, as well as several tours in America and Australia, and made many records.  However, by 1979 Alistair's solo career was really taking off and he and Tommy left the band.  In the 1980s Pete Wood himself joined the Ranters and became 'a lifelong mate' of Johnny, and later on he became a member of the trio which was the Johnny Handle Band (a dance band with Johnny, Pete and Chuck Fleming).

Chapter 6 - at this point, with Johnny's straightforward instrumental career clearly already described, we come to Johnny the Researcher.  What Pete calls the 'process of the academisation of folk music, starting with the Newcastle Folk Music Degree' at Newcastle University and Folkworks based at the Sage in Gatehead.  Johnny, having retired from teaching in 2000 became part of several north eastern research projects, including:

1) The Northumbrian Anthology, run by Brian and Helen Mawson, and financed by a Heritage lottery grant;

2) FARNE - a project supported by Gateshead Council, Newcastle University, and the Sage, Gateshead which according to an article by Pete 'has placed on the web an extraordinary range of Northumbrian music and song by digitising original collections and manuscripts from '... 1694 to ... 20th century';

3) Folkworks - now being fronted by Alistair - for whom Johnny taught primary school children how 'traditional material was linked with new compositions by the pupils' and these were turned into full scale school productions;

4) The Composers' Club evenings which were held once a month at The Bridge Hotel, 'concentrating on a particular songwriter or a group' which included 19th century music hall as well as local contemporary writers such as Ed Pickford and Graeme Miles.

The latter part of the book shows how during the 'researching' time Johnny continued to write songs, recitations and tunes.  He also continued gigging, including playing old peoples' homes, where he taught them to play percussion instruments, as he had done with kids in primary schools.  He has always worked solo or with Colin, and Louis, and others mentioned here.  Now he works with his wife Chris Hendry, and I was delighted to see the pair playing in Robin Hood's Bay at this year's Whitby Festival.  Johnny is 82 (!), with slightly less voice, but every bit as much showmanship, musicianship, and good humour as ever.

As I said at the start, this is a book which as much as anything shows the love Pete has for his adopted home, the music and mates he has found and, above all, for his subject Johnny Handle.  The cover is a lovely picture of Johnny looking a very pretty 14, but probably in his early twenties.

I have a few quibbles, but not that many.  I was sorry not to have heard more of The Marsden Rattlers led by Jim Bainbridge (another teacher!) with Trevor Sheridan, Cathy Bainbridge & Jim Irvine, and almost nothing of the other great Geordie singer, Bob Davenport - though I suppose he had nothing to do with MacColl and Lloyd, and played for most of his life 'doon sooth'.  This is a well written book, but Pete, like all self-publishers, needs an editor to clear up typos, misspellings, misnamings like Billy Atkinson, who as one of The Shepherds was always known as Will Atkinson.