For those for whom the Harmony Sisters are unknown I quote from the sleeve notes: "The Harmony Sisters grew out of long time friendships, similar interests, and a love of traditional music.  All three play the fiddle, Alice (Gerrard) plays guitar and banjo, Jeanie (McLerie) plays the guitar and Irene (Hermann) plays the mandolin and cello.  The trio has toured extensively throughout the US and Canada giving concerts and workshops and delighting audiences with their music, recipes and warm personal style." 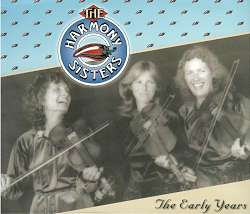 While I am sure that all of this is is very true and that this disc would probably sell very well at their live appearances I'm not sure if it strong enough to appeal to a buying audience who have not just spent a pleasant hour or two in the company of these very accomplished and well established (in two cases out of three anyway) musicians and singers.

This CD is a re-release made up of two albums originally released on the Flying Fish label in 1981 and 1983, plus four tracks from concerts and radio shows.  I had not heard the original albums and looked forward to listening to this issue.  I have known Jeanie's music for some time now having booked her regularly when I was running the Ballads and Blues Folk Club in London.  Jeanie was living here at the time and appearing as a duo with the late Sandy Darlington.  The two vinyl albums which I still possess from those days might I think be Jeanie's first appearance on record.  Since those days she has gone on to much wider recognition and still returns quite regularly to Europe with her current musical partner Ken Keppeler and their group Bayou Seco.  As I write this in fact, they are due to appear at a local club in four days' time.

Alice Gerrard has of course been in the bluegrass and old timey music field under many guises, her much celebrated partnership with West Virgina's Hazel Dickens having been a strong influence on and inspiration to many other women singers even including some in the more commercial world of Nashville's pop country industry.  In addition to this partnership she also made at least one very nice duo album with Mike Seeger, and also was one of the members of the Strange Creek Singers alongside Hazel and Mike and with the addition of Tracy Schwarz.  Currently she is a member of another excellent three piece group with Brad Leftwich and Tom Sauber.  In addition to her many years of taking the music to the people and being involved in the collecting and preservation of the music of the old timers from the Appalachian region, she also manages to fit in the organisation and editing of what has become the bible of the old timey music scene Old Time Herald.

Alice has always produced good solid honest heartfelt music and that is what I was expecting here.  Unfortunately I have to say that I was disappointed.  I have always thought it a good idea to commence an album with a strong opening track, something that would make you want to hear more.  The opening track here is an a capella version of a song which I think was first recorded by the Carter Family of South West Virginia.  This version reminded me more of the Andrews Sisters.  This doesn't mean that the result is unpleasant but just somewhat too smooth for my particular taste.  The second track is more like it, a song written by Alice and dedicated to Tommy Jarrell's daughter and the many other women forced into a life of drudgery in the mills of the south.  It is similar in both style and feel to the material which Alice used to perform with Hazel Dickens, Irene's cello work on this track really pushes it along.

The next track, along with the other Cajun material on the disc, I think fails in capturing the Louisiana spirit.  The music itself is just fine but the vocals just don't work for me.  I'm sorry but I have yet to hear a non-Cajun sing a Cajun song convincingly.  There is an abandonment and depth in the singing of most Cajun singers which I do not think outiders are able to capture or emulate successfully.  In a similar way to the blues I think that it is possible to replicate the instrumental side of the music but when it comes down to vocal expression it's almost impossible if you are from outside of the culture which produced it.  Bowling Green is a song learned from Kentucky's Cousin Emmy, the lady responsible for teaching Grandpa Jones his rip-roaring style of banjo picking.  Irene's mandolin playing is in evidence here as is Alice's own banjo playing and my only criticism of this track is that I could have done with the banjo being more up front but it is one of the tracks taken from a live performance and that probably accounts for the the slight lack of balance.

I could continue with a complete rundown (unfortunate choice of word) of each track but I feel that it would become a little repetitive.  There are some good songs here well sung and well played, I particularly like Irene's song That's the Way Love Goes - far from the tradition but well played and very well sung.  The problem is - and it might just be my problem - that I am unable to listen to such material as Gaither Carlton and Doc Watson's Lone Pilgrim or Leroy Carr's Papa's on the House Top, without comparing them with the originals and the versions here pale in comparison.  In addition I don't find listening to a recipe for chicken in a wok to be very entertaining even if it does only take up one and a half minutes of a generous seventy minutes playing time.  If I was asked to categorize this album I would have to call it Easy Listening Folk.  This is not to put it down, but it's too smooth for me.