John Herald's first album in 18 years according to the sticker on the case, and listening to the opening track Martha and Me, it sounds as if it could almost have been recorded 35 or more years ago. 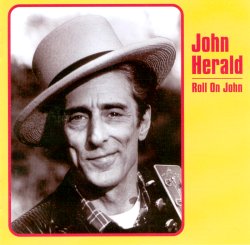 There is a quite heavy acoustic guitar opening similar to the old Rooftop Singers opening for Walk Right In, if you can remember that, or one of Ian and Sylvia Tyson's offerings from the same era.  The song itself sounded quite familiar but I couldn't place it until I read Herald's explanation in the notes.  It is a song which he borrowed from the '30s duo the Alabama Sheiks and adapted to suit his own style.  It is the type of song which brings to mind the revivalist jug bands of the sixties and obviously originates from the black tradition.  The singer boasts of his main occupation being taking women from their working men, quite a common claim in the songs of some bluesmen, and no doubt in may cases very true.  The harmonica on this track reminds me of the sort of sound that used to come from the would-be blues players in the London clubs of the sixties too.

Hitch Hike Fever is a song written by Herald very close to a melody made popular by Goebel Reeves, aka The Texas Drifter, a real-life Wobbly who made a number of records in the thirties including Railroad Boomer - the song to which I refer.  I suppose at this juncture I should warn delicate readers that this song, along with some others on the album, includes a pedal steel guitar and there are drums along too and the whole thing has more of a country flavour to it - but for 'country' do not read 'Nashville'.

I Heard the Bluebirds Sing is another song from the country stable, a song probably best known from the Louvin Brothers version.  Here John is joined by another singer which could be any one of three vocalists mentioned in the notes and they both do a creditable job.

The Carlisle Brothers, Bill and Cliff, were popular in the country field in the thirties and Bill, as I write, is still performing at the age of ninety plus, proving that you can't keep a good man down.  During their careers they recorded quite a number of risqué songs such as Ring Tail Tom and Nasty Swing for instance, but also wrote and recorded some good religious material; Uncloudy Day being a good example, as well as such songs as the present Gone Home - a song by Bill dealing with the passing on of good friends.  A quite powerful song and not at all maudlin.  According to the notes, Herald first heard this song performed by Flatt & Scruggs, but had the song also in a copy of the Bill Clifton Song Book put out in the fifties.  Herald explains that Clifton was a song collector and well known bluegrass singer who included lots of Carter Family songs in his book.  Well, Clifton still is a well-known collector and lives just a little further up Poor Valley from the Carter Family homeplace in Scott County, Virginia.  Clifton in fact spent a number of years living just outside London in the sixties and seventies and encouraged a few people over here in the ways of bluegrass.

I have recently purchased a Folkways re-issue of a couple of bluegrass albums by Red Allen in which Pete Kuykendall, a member of the band at the time and presently best known as the editor of Bluegrass Unlimited, states that they too at the time were "working out of the Bill Clifton Song Book".  Whatever happened to the old romantic notion that the singers from the rural south up in the hills and hollows learned their songs at their mother's knee?  New York folkies and hardcore Kentucky bluegrass players singing from the same hymn sheet!

I have a confession to make here, I know the name Warren Zevon, author of Carmelita, the next song, but I cannot recall from where.  Is it the Nitty Gritty Dirt Band?  Anyway the song deals with the problem of being strung out on heroin on the outskirts of town and would seem to have come from the sixties or seventies.  The harmonica on this track is sometimes suggestive of the sound of an accordeon and, together with the rhythm used, conjures up the flavour of Tex Mex music to my ears.

The rest of the material here includes work from the pens of Merle Travis: Dark as a Dungeon, Ernest Tubb: Walking the Floor Over You, Hank Williams' Hey Good Looking and, of course, the title track Roll On John.  Some of you may be familiar with the name Rufus Crisp, a Kentucky banjo player recorded by Margo Mayo in 1946 for the Library of Congress.  She recorded him again in the fifties and this time the results were issued by Folkways Records in 1972.  Well, this song was apparently first collected by Mayo in the thirties from Rufus, performed by Rufus's son Palmer for Mayo in 1946 and again by Palmer in 1955 .  I first heard it on record by The Greenbriar Boys - which was John Herald's New York bluegrass band of the sixties - and although John does a good enough version here I do miss the lead voice of the late lamented Ralph Rinzler, who was part of that group when they recorded it.  Ralph learnt the song from the 1946 L of C recording and I suspect that John got it from Ralph.  The three versions which I now own are all slightly truncated versions of Rufus Crisp's own, which was apparently sometimes as long as fourteen verses.  The song is a much slowed down version of Roll on Buddy / Nine Pound Hammer and, with this more relaxed treatment, has long been a favourite of mine.  Hopefully someone will make Rufus's own fourteen verse version available sometime.

The overall feel of this album, if it isn't already obvious from the above, is country; the backing instruments including steel guitar, bass guitar, fiddle, mandolin, harmonica and unobtrusive drums, but they are not all present on all the tracks.  Roll on John, for example, is solo Herald vocal and guitar recorded at a live performance.

The album was recorded in Scotland in 2000 and I guess the backing musicians are all local - and they do a fine job.  The notes are quite entertaining and informative about the early days of the late fifties and early sixties in Greenwich Village, the Woodstock Review days of which John was part, and his time on the west coast.

John's distinctive voice is still as good as ever, and he is as entertaining as always.  We shouldn't have had to wait so long!  If you enjoy good country music of the old school with a flavour of the sixties folk scene in it's approach, then you will almost certainly enjoy this album.  I do; very much so.

One small niggling point is the playing time of 32 minutes 10 seconds - ten tracks and a spoken intro to one song.  A little brief, I feel; but not knowing the retail price it could still possibly be a bargain.  That having been said, it is still good music.