The Grouse in the Heather

It includes the following tracks:

A collection of original compositions with a single theme used to be called a 'concept album'.  Issuing one was once a rite of passage for artists who hoped to be taken seriously.  Then the gimmick got stale, and ambitious performers assured us that their latest product was definitely not a concept album.  Over the years, the pendulum has swung back and forth.  But aside from the whims and fancies of the music business, there is a continuing dilemma for musicians here. 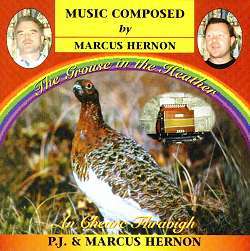 Anthologies of old favourites and half-forgotten gems may still do very well - if the packaging is good, and the artist already has a famous name.  But as record companies keep re-mastering and recycling their back catalogues, favourites and rarities alike grow more accessible, and more familiar.  So, recording artists are under increasing pressure to generate original material.  If their inspiration proves unequal to the demand, a decision to connect a string of compositions to a specific topic may stimulate the creative imagination.  But sometimes it may become a strait-jacket.

The cover of this CD displays a string of ornithological titles, but it's difficult to discern what links them with the actual tunes.  The Hovering Kestrel, for instance, doesn't hover at all - it's a brisk reel.  And The Herring Gull is another reel, whose regular beat fails to invoke the glides and swoops of its alleged inspiration.  The only pieces that conjure up distinct visual images for me are the two slow airs, and one of the hornpipes (The Chattering Stormcock).  The others could just as well have been named after the composer's favourite beers, or dedicated to a string of classic steam-engines.  So for me, at any rate, this particular concept album gains very little from its avian motif.

Nevertheless, there is plenty to admire on it, because the compositions, whether they're appropriately named or not, are well worth listening to.  Some of them - like The Beautiful Goldfinch - deserve to become standards.  The Hernon brothers deliver them all with admirable precision and no lack of warmth, while the supporting musicians add a cheerful bounce to the jigs and reels, and a nice easy swing to the waltzes.  However, I would have liked a few more opportunities to hear the melody instruments in a looser rhythmic environment.  When Marcus Hernon's flute floats effortlessly over Laoise Kelly's ethereal harp on The Invisible Corncrake, and The Lonely Bittern the effect is magical.  I think we can look forward to more good music from this source in future.