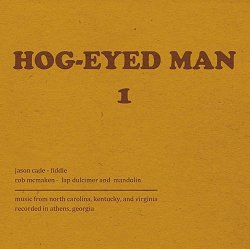 Hog-Eyed Man is a duo comprising fiddle player Jason Cade and Rob McMacken, who plays lap dulcimer and mandolin.  Together, they play tunes and variants from Kentucky and their native North Carolina.  Cade takes the lead and McMacken accompanies, either by playing in unison or by adding a harmonic and rhythmic accompaniment.  Personally, I find it a quite lovely sound, all the more so for its apparent simplicity.  Cade is a wonderful player, producing a tone that is rich and pure, and very traditional-sounding, with its highly effective use of double-stopping, drones and harmonies, and powerful rhythms.  McMacken's dulcimer accompaniments are straightforward and unobtrusively complementary, and he's a fine mandolin picker, too, although the fiddle remains the dominant instrument throughout.

If there is an overall intention beyond that of just making beautiful music, it is that of celebrating a heritage from particular players in the Southern Appalachians, and Cade's notes outline a line of descent that works its way back through fiddlers Bruce Greene and Byard Gray (and, by implication, Cade's own mother), to what he calls 'a past generation of Kentucky and North Carolina fiddlers ... John Salyer, Hiram Stamper, Isham Monday, Jim Bowles, Marcus Martin and Bill Hensley'.  These are names that will resonate with lovers of the music from this part of the world, and those who don't know them but are interested can easily find and listen to examples of their work around the web (recorded by folklorists rather than commercial companies of the 78 era).  I reviewed a compilation of recordings by Marcus Martin released by Southern Folklife Collection (SFC CD-100) in MT some years ago, and prompted by his mention in the notes and not having played it for some while, I was pleased to dig it out and reacquaint myself with a really fine collection of work by an outstanding traditional musician.

That's an aside here, of course, but Jason Cade's position in the lineage of which Martin (whose tune Boatman is given a gorgeous, stately reading by Cade and McMacken) is an illustrious predecessor, is a key factor in what makes this collection such satisfying listening.  For each tune, the notes not only give the fiddle tuning (also a key factor on the Martin album), but specify whose recorded version has been the source, or main influence.  Dulcimer and mandolin tunings are also given, and no doubt a key factor in how the instruments blend so well in these tunes is that the tunings are complementary (or in the case of the mandolin, the same).  In the set that brings together Highlander's Farewell and Flanders' Dream - Cade plays the first tune solo, then McMacken starts the second on his own before Cade joins him after a few bars, the two instruments melding beautifully.  There's a similar effect at the start of The Last of Sizemore, this time with the mandolin.  Incidentally, the source of Highlander's Farewell was the great Virginia fiddler Emmett Lundy, of whose Library Of Congress recordings Tony Russell compiled a pioneering LP on the Topic subsidiary, String Records, away back in the 1970s.

The notes also include some nice touches, such as the observation that Hiram Stamper's Betty Baker has "qualities of timeless knotted wood", or that the version of Far In The Mountain is 'influenced by Isham Monday, Marcus Martin, the Red Headed Fiddlers, and aged whiskey'.  Incidentally, that reference to the Red Headed Fiddlers is the only mention here, either of a vintage recording, or of musicians from outside of Kentucky/Virginia/North Carolina - the aforesaid ginger violinists having been Texans.

Two other nicely telling points from the notes - first, Cade offers the following quote from Byard Ray: "Ain't a woman or man ever been born who can get all there is to get out of a fiddle".  Very true, which is why it's an instrument which offers so much pleasure when it's played in ways that speak so distinctively of the places the tunes come from and the people who have played them.  A fiddle expert would no doubt be able to say more about how this is achieved, but I can at least say that it is unmistakeable when you hear it.  Which brings me to my second point, as Cade writes 'We feel privileged to play this deep and storied music, which we have tried to make our own while maintaining respect for the settings and sensibilities of the masters from whom we learned'.  He can rest assured that they show every sign of that respect, and the music benefits greatly from it, but Hog-Eyed Man have depths and qualities of their own to offer, which is what makes this much more than just a respectful exercise, and such a joy to listen to.